His death was sudden and unexpected. He had been feeling under the weather and had finally decided to see his doctor - probably for the first time in a decade. He never made it that far. While waiting for the elevator to take him up to his doctor's office, he suffered a heart attack. He was dead by the time the paramedics arrived.

The news reached my mother first. She and my father had been divorced for almost 20 years, but still had the same family doctor. Upon hearing that a man had suffered a heart attack downstairs, the doctor identified him as my father and provided the police with my mother's address.

All of this eventually led to me standing in my mother's kitchen as my ashen-faced younger sister broke the news.

I don't remember how I took it; I'm assuming not well. The subsequent days remain a blur, punctuated by sporadic memories: of deciding with my sister that my father should be buried wearing his tie with the pink elephants; of the florist, upon seeing his year of birth, commenting that 61 seemed awfully young to die; of watching his casket being lowered into the ground and telling myself to stop pretending I was just dreaming.

I would become fixated on the moments leading up to my father's death. I imagined his drive to the doctor's office. What, I wondered, does it feel like to be in your final minutes of life? Was my father scared? Did he know he was about to die?

I thought about him standing by the elevator as his heart beat for the last time. Did he think about me and my sister? Did he wish that we were there with him? He had been such a wonderful father to us and the thought of him dying alone on the floor of an office building devastated me.

I dwelled on the fact that I hadn't had a chance to say goodbye. "Just one more moment," I would silently beg. Not too much time. Just enough to tell him I loved him, to thank him for loving me so much.

As my thoughts exhausted me, I threw myself into my work. I practically lived at the office, a herculean effort brought on not by professional ambition but by the simple fact that I couldn't bear to go home.

At night, once I made sure all the other lawyers had left, I'd sit with my head on my desk, sobbing, thinking about how I didn't have a dad any more. When I finally felt my eyes growing heavy, I would rush home to bed, praying that sleep would come quickly.

Twelve months to the day after my father's death found me in the cemetery where he was buried, staring at the ground. We had not yet been able to arrange for a gravestone, as by the time things were sorted out after his death, the ground was frozen. I felt ashamed by this fact.

The last time I'd been at the cemetery was the day after my father's funeral. I had tried to go a number of times since. But every time, the result was the same: I'd make it as far as the front gates, then turn away. Once, I vomited in a nearby garbage can. This time, however, I was resolute.

I dragged myself to a nearby bench and sat down with my face in my hands, repeating those same words over and over again; a sentiment that, while obvious, I was admitting only for the first time. No matter how much I tried to distract myself and will away my grief, the unavoidable reality was that, of my 28 years on the planet, the past one had not been particularly pleasant.

That moment in the cemetery was a turning point. I had been attending a group for bereaved family members, but finally admitting out loud just how painful my father's death had been for me helped turn my grief into a process rather than an impassable wall. Things didn't necessarily become easier, but over time I could feel my sense of paralysis melting away.

I still remain troubled by the same things I was that first year after my father's death. What's changed is that I've learned to stop letting them constantly occupy my mind.

I have trouble dealing with the fact that I will never see my father again. Even with the passage of time, this is a reality I still don't know quite how to process. If I think about it too long, I'm liable to break down crying. And when that happens, I just admit the truth - that this has all been very difficult for me and it probably always will be.

It's too late to fix my relationship with my father
August 24, 2010 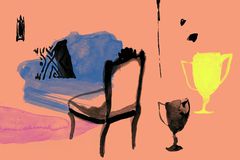