Recently, while visiting my son at his university, I was lent a student bus pass to get between his place and mine. I didn't think much about it and used the pass for a couple rides. Then police conducted a spot check. I got busted using my friend's pass. My son sat beside me, trying to calm me, as I denied having any other identification. The officer pointed to my bulging purse and suggested that most women carry ID in their purses. No, I said, I didn't have any, and babbled myself into deeper trouble.

What was I thinking? I wasn't.

We were removed from the train. I was given an intimidating lecture and a whopping ticket. My son held my arm while I shook, extracting my driver's licence from my purse. He tried to reassure me, "It's just a ticket, Mom." That ramped the officer up to threaten me with fraud and a criminal record. I've never been so humiliated, and in front of my son. I thought I might throw up.

I've taught my children always to tell the truth. What can I do to salvage the situation? (Besides paying the ticket immediately, of course.)

Granted, flashing a phony-baloney bus pass around town and filling the air with lies when confronted by a cop is not ideal behaviour. But it doesn't sound like you're exactly a Lex Luthoresque master criminal, either.

In fact, from the way you describe the situation, you are an absolutely terrible liar. And that can be kind of charming. Kids are horrible liars. It's cute. And your panicking and telling a cop you had no ID while he was eyeballing a purse obviously bristling with credit cards, driver's licences, health cards and so forth - it's kind of the grown-up equivalent of a kid with a chocolate-smeared face denying he ate his brother's candy bar.

So I wouldn't beat yourself up about it too much.

On the other hand, I don't want to let you off the hook too easily. It's true that these little moral shortcuts can lead to bigger ones. One day you're flashing a fake bus pass around town, lying to a cop, next thing you know you're walking your dog without a leash, parking in handicapped spots and sneaking your own popcorn into movie theatres.

Sounds to me a good thing you got busted when you did, before you could embark on a crime spree. Maybe it will cure you of your cop-misleading, corner-cutting ways for some time to come. (Like when I was 17 and the house dick at the Hudson's Bay Co. grabbed me in the revolving door as I tried to saunter out in a sport coat I'd casually thrown on and "forgotten" to pay for. He took me into a special back room and threw a scare into me that pretty much ended my shoplifting career on the spot.)

As to the parenting aspect of your question: Well, first off, I should state for the record that I'm no parenting expert - though I do sometimes play one on TV, having written a book about being a stay-at-home dad, still available in finer remainder bins near you.

But one of my big things has always been this: Generally speaking, trying to pretend to be a perfect, morally incorruptible person - to your children or to anyone else - is a mug's game. Sooner or later, the truth will out: You aren't perfect.

Maybe it's a generational thing that's changing. Our parents spent so much time and energy promulgating and protecting the myth they were infallible, omniscient and morally unimpeachable. But, like the Easter bunny, Santa Claus and the tooth fairy, these myths don't stand the test of time. You grow up and discover your parents were lying through their teeth about the tooth fairy; the Easter Bunny was a canard; and Santa was a big, fat fiction.

And your parents were ordinary mortals with feet of clay all along.

I don't think our kids look to us for "Father Knows Best" type perfection any more, if they ever really did. They just need to see us trying to be the best we can be, and being human.

And, being human, we will naturally make mistakes - as you did. Sometimes premeditated ones. The main thing is they see us trying to correct them, do damage control with due diligence, and make things right.

You appear to have done, or be doing, all that. And your son, no doubt, has observed that process and found it instructive.

And if he's old enough to be in university, I'm sure he has a pretty good sense of what kind of person you are. I'm sure it was no problem for him to see you in a bit of a pickle and actually be able to help you out for a change.

I think you have it twisted with all this "in front of my own son" stuff. Your son is the best person to be a witness to this. If a mother can't do something embarrassing in front of her son, and vice versa, then I don't understand the meaning of family.

I'd just inhale, exhale, and let the whole incident go. You'll laugh about it some day, trust me. How does that old saying go? "Comedy equals humiliation plus time"?

The plight of the Pinocchio parent
September 27, 2009 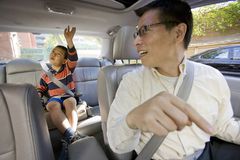 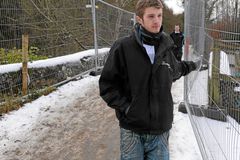 Can you tell someone's lying from their expression?
June 14, 2010
Follow us on Twitter @globeandmail Opens in a new window
Report an error Editorial code of conduct
Due to technical reasons, we have temporarily removed commenting from our articles. We hope to have this fixed soon. Thank you for your patience. If you are looking to give feedback on our new site, please send it along to feedback@globeandmail.com. If you want to write a letter to the editor, please forward to letters@globeandmail.com.
Comments