Sleeping with your dogs: Now, now, minds out of the gutter…we're talking about co-sleeping with your pets, not that kind of sleeping together. Co-sleeping with human babies is an unending controversy - fear of smothering, interference with healthy sleep patterns, personal space issues etc. Many mums and dads sleep with their babies in secret for fear of judgment. And it's the same story with humans sharing beds with pets - just as many covertly cozy up with Rover for fear of condemnation as bad pet parents.

According to the Sealy mattress folks, 67 per cent of North American pet owners sleep with their pets. Sealy is, of course, in the bed selling business, and it does give new meaning to the right kind of family bed. Take Gwyneth Dwyn, a prevention and health promotions co-ordinator for Addictions Services in Wolfville, N.S. She and her husband, an IT consultant with a PhD in psychology, just purchased an early Christmas present - a king-sized bed frame and mattress, purchased specifically to accommodate Jake, a hound dog/Doberman mix, and Chester, a 20-pound mixed Maine coon/Persian cat. This is the bed to end all beds: Handcrafted by an exclusive timber frame company, it's a bed that belongs more to Gandalf in The Lord of the Rings, where he and a pet dragon might slumber. Ms. Dwyn says she and her husband are aware of the arguments for and against sleeping with pets, but they consider their cat and dog to be part of the family and always welcome on their bed.

Bruce Bowker, a vet practising in Nova Scotia, says some in the medical camp caution against a human/pet bed because of the possibility of cross-species transmission of infectious diseases (HIN1 Influenza, MRSA), and external parasites such as scabies and ringworm and internal parasites like roundworm. So, if the thought of bugs and creepy crawlies doesn't make you send Spot packing, and you're not immunocompromised, sleeping with well-cared-for pets shouldn't pose any problems.

It always comes down to personal choice, Mr. Bowker says. In fact, he feels the benefits outweigh the risks, that evidence shows contact with pets decreases stress hormone levels and points to therapeutic dogs and cats used in hospitals and nursing homes. Some animal behaviourists worry about dominance issues, but Mr. Bowker suggests common sense is the best guide. So when Max the Rottweiler becomes boss of the bedroom, and Perry the poodle becomes prince of the pillow, the alpha dogs might have to be put in the proverbial doghouse for a night or two.

It's not just about what's best for the pet, though. You might find yourself jolted awake as Lassie tosses and turns amidst snorts and woofs in his sleep. With insomnia and sleep disorders an ongoing societal woe, owners might do well to think about how co-sleeping affects quality of sleep. A 2002 survey conducted by John Shepard, medical director of the Mayo Clinic Sleep Disorders Center, found that 22 per cent of their patients were sharing their beds with their pets and that snoring was reported in 21 per cent of dogs and 7 per cent of cats.

But pet owners like Ms. Dwyn feel there are ways to resolve all these issues, if sleeping with your beloved critters is a priority.

"People have been sleeping with their animals for thousands of years. Animals have always been welcomed into the tribe," she says. For Ms. Dwyn and her husband, crating and barring the animals from the room simply wasn't an option. "We even took the bedroom door off the hinges so the dog could have a running leap to get on the bed." In their boudoir, lack of space was the issue, and any disruption in sleep was caused by bed size. Now that this issue has been perfectly resolved by what they call "the interspecies bed," there is room for all, and for all a good night!

Christy Ann Conlin, who owns two cats, Orangie Orange and Marshmallow, in Halifax, is the author of Heave. Her young-adult novel Dead Time comes out in January. 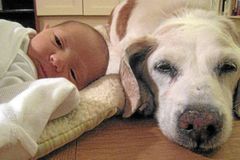 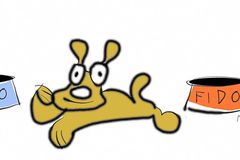