Elaine Sciolino, a Paris correspondent for The New York Times, talks to Julien Russell Brunet about her new book, La Seduction: How the French Play the Game of Life .

"Seduction" is a pretty loaded word in English. What does it mean for the French?

The word "seduce" has a much broader meaning in French than it does in English, where it has a negative and exclusively sexual feel. Where North Americans might use the word "charm" or "attract" or "engage" or even "entertain," the French might use the word "seduce." There's such a thing as an " opération séduction" and the closest thing we have to that in English is "charm offensive." The French use " opération séduction" in the oddest places, even in describing France's strategy in Afghanistan.

Where else does it appear?

This notion of seduction - anticipation, promise, charm, allure, the tools of the seducer - is a powerful engine in sex obviously, but also in history, politics, culture, style, food, foreign policy, literature and manners. It underlies every aspect of French life and I even go so far as to say that it's France's unofficial ideology that is codified in patterns of behaviour that are so well established that they're not even conscious acts.

The use of the baisemain, the kiss of the hand, by men in power with women like me. I was surprised when I appeared for an interview with Jacques Chirac who, as president, received me and the foreign editor of The New York Times, and he greeted the foreign editor by shaking his hand and he greeted me by kissing my hand. I, as a good American feminist, was a bit taken aback that this man immediately defined me as a woman and him as a man. It wasn't an aggressive act, it wasn't an assertive act, it wasn't a sexual act, but it certainly made clear 'Madame, I am here to charm you as well as to answer your questions.'

You describe "la séduction" as a game - is there a winner?

I'm not saying that everybody in France always wants to play but I am surprised at how many people still love process and not result. The whole goal of the debate at a Paris dinner table is to have a lively conversation that amuses and not necessarily one where a certain point will prevail. Even with sex, modern-day [French]novels talk about the pursuit rather than the end result.

The sort of Sex in the City approach where you do a discussion of what happened… it always has to end up in coitus and there always has to be the sex act - it's less prevalent in French television and French literature. One of my favourite all-time quotes about the process and not the act of sex is from Georges Clemenceau. One of the characters in one of his novels celebrates the pleasure of the prelude, saying "the most beautiful moment in love is when I climb the staircase."

What can North Americans learn from the French?

The French seem to take pleasure in life more than we North Americans do with our puritanical, work-driven culture. This is not universal, but it is something that has struck me over time. It's the art of creating and relishing pleasures of all kinds. The French have created and perfected pleasurable ways to pass the time: perfumes to sniff, gardens to wander in, wines to drink, objects of beauty to observe, conversations to carry on and it's almost as if they give themselves permission to fill this need for pleasure that our North American hard-working, supercapitalist culture often doesn't allow.

That's not seduction. Big cars and big money is flashy, that's bling bling. That's why Sarkozy got into so much trouble when he was elected president and he went to Le Fouquet, that very flashy, touristy place on les Champs-Élysées. The French don't like flashy self-indulgence. They like it to be quiet. They like it to be behind closed doors. This is why the French are so upset by Dominique Strauss-Kahn spending $50,000 a month on that house. It's extraordinary. The French are more upset about that, I think, than any hint that there could have been something that went wrong in that hotel suite. Honest and truly, it's bizarre but it's true.

Excess is not seduction. A conversation between two people is seduction. Like what you and I are doing right now. You're interviewing me, but we're doing more than interviewing. We're bouncing ideas back and forth.

Living like the French must take some getting used to.

I had to learn how to operate on a Paris street. I have a close French friend who is in her 50s, but quite beautiful and quite sexy even as a wife and mother of three, and she always gets dressed when she goes out, even to buy a baguette. And so I said to her one day, 'Sophie-Caroline, why would you get all dressed-up with your makeup on and your hose and your pumps to go out and get a loaf of bread?' And she said ' On sait jamais,' one never knows. And I said 'One never knows what?' And she said 'One never knows whether the window washer will whistle at you.' 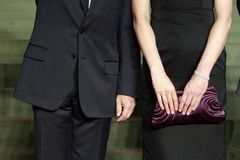