Who would have thought that an innocuous little padlock would be responsible for making city officials around the world feel handcuffed?

The love lock phenomenon sweeping the globe is troubling municipal officials as they grapple with how to handle a popular tourist ritual that some decry as worse than graffiti. It gained momentum in the early 2000s in Europe and Asia and has spread to Australia and North America. Lovers inscribe their names on a cheap brass padlock, lock it to some public fixture – preferably the railing of a bridge – and then throw away the key to symbolize everlasting union.

Earlier this month in Vancouver, bowing to populist sentiment, city leaders approved a permanent installation of love locks. Two years ago, people began locking their padlocks to the city's Burrard Bridge. Municipal crews intervened with bolt cutters, citing safety concerns. Then, in the spring last year, some cropped up on a chain-link fence along the seawall near the Plaza of Nations. They were soon dismantled, too.

I don't know about you, but I have started to think of them like a budworm infestation in our forests. Either that, or some weird alien growth that won't die. Kill them in one place, they pop up in another.

Consider Rome. In 2007, a year after the publication of a novel, I Want You, by Federico Moccia, in which the protagonists affixed a bicycle lock around a lamppost on the Ponte Milvio, city officials banned them. A lamppost on the ancient bridge, which crosses the Tiber River and dates to 200 BC, had partly collapsed under the weight of copycat locks. Soon, they were found growing on road posts and even garbage bins on the famous bridge. Now, they've all been removed in order to "restore decorum" of the historic structure.

But imagine the hand-wringing of the officials involved. This is about a universal yearning for love. What politician wants to be a killjoy? Not only that, it's about attracting tourists and engaging citizens who want to immortalize their passion, even if, realistically, the relationship may not survive the weekend.

At one point in the city's love-lock saga, Rome's mayor decided to install steel columns on the Ponte Milvio so people could seal their romantic hopes. But now, that too is gone amid much criticism from people who felt the locks were harmless and sweet. There's worse graffiti in Rome, they griped.

Last summer, in Edinburgh, council authorities actually invited couples to place engraved locks on a specially-designated panel on Forth Bridge as part of a local festival and charity campaign. The invitation was a way to celebrate the popularity of the bridge, officials suggested.

The Vancouver councillor who called for a permanent site for love locks last summer to be designed with the help of a local artist had a similar motive. "These types of spontaneous quirky activities make Vancouver a great place to live … We need to foster this energy," enthused George Affleck, who has since become known as the "Councillor of Love." However, when asked recently to vote on five possible locations – Stanley Park, English Bay area, Queen Elizabeth Park, Kitsilano Beach and Jericho Beach – the Vancouver Park Board rejected them all.

Meanwhile, in Paris, a story more dramatic than a Harlequin romance has been brewing for years over love locks. Last month, city officials finally braved the outcry when they took down the padlocks on Pont des Arts, a pedestrian bridge across the Seine. Since 2008, tourists had been putting them on the bridge. By 2012, their number had become overwhelming. But the city did little to stop the practice. "It's very touchy to attack the phenomenon – because it draws tourists," one official confessed to The Wall Street Journal.

Last summer, a part of the parapet of Pont des Arts collapsed under the weight of locks. Glass panels replaced some of the wire meshing on the bridge to prevent a further growth. But the infestation continued. Finally, last month city officials took action, cutting them all away after another collapse of part of the bridge's structure. It was estimated that there were close to a million padlocks, weighing 45 tonnes.

The practice is a bad tourist impulse, the same as buying some memento when you're somewhere foreign and you think, "Oh, how charming!" And then you get home and the thing looks ridiculous.

Three years ago, my husband and I were in Venice on a romantic holiday. On the ancient wooden Ponte dell'Accademia, we noticed hundreds of love locks shining in the late winter sun. At first, I thought they were kind of cute. Venice is a city in which to fall in love and be in love. And I figured it would be like throwing a coin in the Trevi Fountain in Rome, a tradition that every tourist is encouraged to do. But then I thought better of it.

The origin of love locks is said to be 100 years ago in a small town in Serbia where a young couple frequently met on a span called the Bridge of Love. They were engaged to be married, but when he went off to fight in the First World War, he fell in love with a local girl in Greece. Devastated, the Serbian girl never recovered, dying of a broken heart. In a gesture to prevent the same romantic tragedy befalling them, young women started writing down their names and those of their boyfriends on locks, which they attached to the bridge.

But the mawkish barnacles that are part of the global spread of popular, lowest-denominator taste, like Starbucks and McDonald's, are not. They're emblematic of an overly sentimental popular culture that celebrates the saccharine and avoids the complex. Far from being a local tradition, the locks are an imposition from strangers who somehow want to "own" their moment in a foreign place – not unlike the hikers who stripped naked upon summiting a peak in Malaysia or the plethora of selfie-takers. People put their presence above the historic and cultural importance – not to mention the beauty – of the places they're visiting.

I understand the allure of bridges. They're halfway between here and there – perfect as a place to promise romantic commitment. They symbolize a mastery of human ingenuity over nature, a metaphor for the ability to overcome obstacles.

But I prefer my bridge ritual to involve a stick and a wish, just as Winnie the Pooh did.

Maybe city officials should offer love-lockers around the world a rented selfie stick to take their pictures on a bridge. It might satisfy their urge. And the bridges wouldn't be covered in an iron virus. 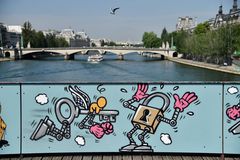