Nearly three million hits later, here's hoping for a worldwide moratorium on guys proposing to their girlfriends on the JumboTron at sporting events this year.

We're talking about the botched proposal at a UCLA basketball game this past Christmas, which went viral on YouTube after it was caught sadly on the stadium's "Mistletoe Cam."

When the camera landed on one yuppie couple, the man stood up and announced, "I knew that I was going to do this from the first day that I met you so I figured now is as good a time as any." Down he went on one knee and out came the box, which was about the time the girlfriend's face darkened. Swatting away a microphone jammed in her face by the cheerful Mistletoe Cam announcer, the woman sat stunned. And then came the bolt, through a booing crowd.

While many have speculated the entire disaster was staged, it's not the first time a public proposal went belly up. A YouTube search for "marriage proposals gone wrong" yields reams of results, like a January 2011 video showing a thin-mustachioed man named Brian popping the big question to Caroline, before a food court Cinnabon.

"Caroline, I'm dizzy whenever I'm around you. We met here one year ago right in front of this Cinnabon and when we did, I was dizzy in your presence."

Maybe it was the bakery fumes?

Mall rats film the action while a table of geriatrics looks on: "Say yes," one of them yells emphatically as Caroline covers her mouth and ears. When Brian's buddy pulls up with a guitar to croon Neil Diamond's Sweet Caroline, the food court erupts in a sing-along. Caroline pants "Oh my God," and runs off.

"The Cinnabon lady said she'd marry him," one voyeur chortles in the background.

The video has itself garnered nearly three million views, but neither Brian nor the UCLA guy is getting any pity. Most viewers seem to agree: Public proposals are tantamount to a pressure tactic, and if you're going to subject an unsuspecting girlfriend to one, brace yourself for a possible no.

Popping the question in front of a crowd is "an exercise in utter narcissism," said Karina Lemke, a Toronto wedding planner for the television show Rich Bride, Poor Bride.

"If the guy is not 100 per-cent-sure that the answer will be yes, well then sorry: He has to take the rejection like a man," said Ms. Lemke, who is increasingly getting requests from men seeking proposal coaching.

"Proposing at a sporting event? Please, is that really what most girls dream of? Seems to me that he wanted to see himself on the JumboTron and the proposal was more about him than her. … A sporting event is not what I would ever suggest. It is a private moment and there is always the chance that the answer will not be the one that is hoped for."

Beyond the public humiliation, there are also myriad creative attempts gone horribly awry over the years, even though they did land many of the orchestrators a yes.

In 2008, Londoner Lefkos Hajji stuffed a $12,000 diamond ring into a helium balloon for his girlfriend Leanne, only to watch it float away into the sky. A hysterical two-hour car chase ensued, but the balloon ultimately outran the car.

"I had been planning the proposal for ages," Mr. Hajji told The Sun. "I thought I would give Leanne a pin so I could literally pop the question. I had to tell her the story. She went absolutely mad."

Things went slightly better for New Yorker Don Walling, who proposed to Gina Pellicani on the pedestrian walkway above the Brooklyn Bridge in 2009. The ring fell out of the box and onto the road below.

"I watched it fall through a crack in the bridge, right between the planks," Ms. Pellicani told the Today show.

Mr. Walling climbed down the bridge tower, triggered a suicide alert, convinced police he wasn't a jumper and retrieved the ring, which had been run over – its diamond luckily undamaged.

"While a wedding is and will always be the domain of the bride, the proposal may be the only real event that the groom has or appears to have complete control over. However, a lot of men are wanting to do elaborate unique proposals and not sure how to pull them off," said Ms. Lemke.

It was a stomach, not a roadway, that snatched Reed Harris' ring – his girlfriend's stomach, no less. In 2009, the New Mexico man dunked the engagement ring in his girlfriend's milkshake, waiting to film her glee as she discovered it at a Wendy's diner.

Instead, Kaitlin Whipple swallowed the diamond band whole. In the end, Mr. Harris proposed in a hospital, where an X-ray showed the ring glowing behind the woman's rib cage. Ms. Whipple accepted, and her ring re-emerged two days later.

"I have never been so excited about my bodily functions," she told the Daily Mail. 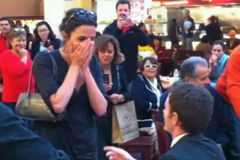 The biggest mistake men make when proposing
February 8, 2011
John, will you marry me? When women propose
December 10, 2009 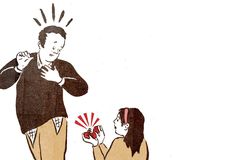 If she's moving overseas, I propose not proposing
May 3, 2008
Follow Zosia Bielski on Twitter @ZosiaBielski
Report an error Editorial code of conduct
Due to technical reasons, we have temporarily removed commenting from our articles. We hope to have this fixed soon. Thank you for your patience. If you are looking to give feedback on our new site, please send it along to feedback@globeandmail.com. If you want to write a letter to the editor, please forward to letters@globeandmail.com.
Comments