Buddies growing up in Montreal's West Island, these two lost touch after high school. Fast forward 30 years to a friendly reunion that lead to a love connection – all thanks to Facebook.

Debbie: Technically we met in kindergarten and were together through elementary school and high school. I was very into studies. Leslie was athletic, into all the sports.

Leslie: It was a brains and brawn kind of thing. Ha! But we were friends – best friends – all the way through. The relationship was entirely platonic at that point.

Debbie: We loved to go to movies. I think we must have seen Grease in the theatres 10 times.

Leslie: At least 10 times! I guess that really dates us. When it was time to go to university, Debbie went to UNB (University of New Brunswick), I went to Dalhousie. There was no e-mail or anything like that and we just fell out of touch.

A whole new world (and a new car)

Debbie: In the fall of 2012, I finally decided to get onto Facebook. Leslie was the first person I looked up and she accepted my friend request right away.

Leslie: I had always wondered what ever happened to her. By that point I was living in Winnipeg and when I saw that she was going to be here for work, I reached out. And she tried to blow me off!

Debbie: I think it was a confidence thing. All these years had gone by and I just wasn't sure. Eventually I agreed. I can still picture Leslie pulling up outside my hotel in a blue Mini. I hopped in and it was like all the time just melted away.

Leslie: She was all over me. Ha! No, I'm just kidding.

Debbie: Up until then I hadn't really had much of a personal life. I had devoted myself to my career. And then it all happened really quickly and it was like a whole new world opened up. It was also really funny because right before I had been looking for a new car. I really wanted a Mini, but it didn't work out. And then I got one!

Debbie: I guess you could say I came out when I called my family to tell them I was with Leslie. Soon after I was moving to Winnipeg. They were surprised, but supportive and happy for me.

Leslie: We definitely complement each other. Debbie grounds me. She makes me think about things rather than just saying, we're doing this.

Debbie: And yet in some ways we're very similar. When we got married, we decided we would write our vows and not show each other until the ceremony. I love to write, so mine were about a page and a half

Leslie: And mine were short and sweet. And yet, they both said the exact same thing. Debbie can be very wordy.

Debbie: All right. It was funny though. The marriage commissioner said she had never seen that before. 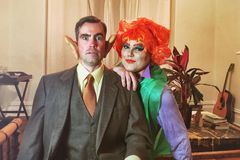 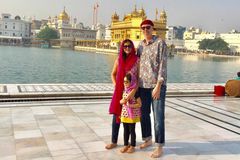 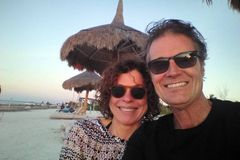