Rebekah Wolkstein stands at the front of an auditorium, facing her unconventional audience. She is 35, a bright spark of life with her big smile, red lipstick and enthusiasm for Buenos Aires tango. She introduces herself and the Payadora Tango Ensemble, a sought-after quartet that has played to sold-out audiences in Toronto at popular venues such as the St Lawrence Centre for the Arts, Koerner Hall and the Four Seasons Centre.

Accompanied by a cello, accordion and piano, she begins to play her violin, the bow across the strings an insistent plea to live, to love, to dance.

Their eyes are closed. They do not move.

Wrapped in blankets and crocheted covers, they lie reclined in their wheelchairs, feet poking out the end of their blankets in colourful socks or fluffy slippers.

But soon, the faces of some break into a look of unexpected delight, the edges of their mouths lifting in small smiles, their eyebrows raised a bit, the eyes wider.

This is Seven Oaks, a long-term care facility for seniors, one of 10 operated by the City of Toronto.

The name suggests grandeur and grace but outside the windows lies a low-rise concrete landscape in Scarborough.

And inside, well, a gathering of giant snowmen greets visitors at reception – jolly, of course, all big fake smiles and robust girths. Several inches of cotton wool snow have fallen on ledges here and there down a corridor leading to the auditorium where oversized bright pink ornaments hang from the institutional ceiling of fibreboard and florescent lights, some of which are burnt out.

Here, though, is a chance to witness goodwill in action.

The Payadora ensemble is performing at Seven Oaks through the Concerts in Care program run by the Health Arts Society of Ontario, part of a network of seven not-for-profit societies that together have delivered approximately 11,000 concerts to more than 500,000 seniors in retirement homes and long-term care facilities, both public and private, across Canada. They also perform in hospitals.

But holiday charity is not the only reason I'm here. I'm hoping for an antidote to despair over a Trumpian world order. Several friends of mine – granted, all liberal types who go to yoga and drink lattes and think about the glory of heirloom tomatoes – took to baking after Trump's shock victory. (I made meringues on Nov. 9, all fluffy and sweet.) Every conversation at holiday parties is about the emboldening of hate; the thin veneer of civil society that president-elect Donald Trump so easily stripped away; the shift to an alternate reality that unfolds like a suspense drama on Netflix. Who knows how it will end?

The watching of it is addictive; the unease, palpable. Friends have teared up when talking about it. And there's a feeling of helplessness as a Canadian, as though you're seeing your sister marry some reprobate, a choice you must accept, even as your mind fills with dark premonitions.

As a result, the festive holiday this year feels like both a welcome and an unhelpful distraction. Maybe we should busy ourselves with the making of protest placards not shortbread.

I ask myself – where is the reassurance in the goodness of humanity? To work for a better future, you have to feel that we're capable of it, that civility, kindness, tolerance are more than just words; that, in some people at least, they're innate.

Caregivers had wheeled approximately 60 residents into the room, lining them up in rows. Others arrived clutching walkers or the hand of a staff member responsible for escorting them to and from their rooms. Of the 249 multicultural, multifaith residents at Seven Oaks, a facility with full-time nursing staff and on-site doctors, the average age is 85 (the residents range from 60 to 100 years old). The average length of stay is two years. Dementia is the major health issue.

There was some uncontrolled shouting at one point; some reprimands to be quiet. A daughter held the hand of her mother in a wheelchair and rubbed her shoulders. She whispered something to her. Her mother's face shifted from inexpressive, eyes closed, to a look of wonder as though she were a child who had just been told about Santa Claus. In the back, a woman played with a baby doll, seemingly oblivious to the music. At the front, a woman pretended to be conducting the music, waving her arms, head nodding to the beat.

"These performances [with Concerts in Care] are my favourite gigs," Wolkstein says at the end of the concert. Born in Wisconsin, she is particularly troubled by the election. "Playing here makes me feel better."

Concerts in Care began 10 years ago in British Columbia. The Health Arts Society of British Columbia was founded by David Lemon, a retired insurance executive who had witnessed some family elders lose their autonomy and experience drastically reduced versions of their former lives, going from a rich and dignified life to living in a room in a retirement home, separated from other dementia patients by a plastic curtain. "Frail elders in care are not, as our culture regrettably sorted them, a different species," he says in an interview on the phone from Vancouver. "We forget that they're basically us on a different part of the trajectory." He calls the inability of elders to get out to concerts an "arbitrary impediment."

Since the founding of the B.C. society, sister groups, individually managed but linked by a common board of directors, have started in other provinces. Supported by corporations such as BMO as well as private donors and government agencies, Concerts in Care pays the artists and works in collaboration with leading performing-arts organizations, including National Arts Centre Orchestra, Canadian Opera Company and Tafelmusik Baroque Orchestra. The retirement homes and hospitals in which they perform also pay a small fee based on attendance.

Program co-ordinators in the homes have witnessed the power of music. In one retirement home, a depressed elder who refused to leave her room heard that Robert Silverman, one of Canada's most celebrated pianists, was coming to perform. She asked to be dressed, have her hair fixed and her lipstick applied. Music therapists have welcomed the Concerts in Care program as complementary to their work.

"It is calming and soothing. If you're worried, you feel better," says Doreen Humphreys, 89, who recently moved to Seven Oaks from a condo. "You go to a different place in your mind," she says sweetly.

"Whenever I hear music, I want to dance," chimes in Joyce Fernandes, 91, the woman who sat in the front row, waving her arms like an orchestra conductor during the performance. Partly deaf and blind, she is wheelchair-bound and has lived at Seven Oaks for several years.

"I dance in my chair," she says brightly.

"You do?" asks Humphreys, seated near her. She suffers from mobility issues, too. "I dance with my feet," she says, lifting her feet off the floor and twirling them.

It is such an unlikely place for transcendence. On one side of the auditorium, a collection of nutcracker soldiers are arranged on a table beside an empty, sparkly carriage, presumably for the snow queen who is nowhere in sight. A large Christmas tree stands at the far end. Over the table of nutcracker men, another artificial tree is suspended upside-down from the ceiling.

"No one says anything about the upside-down tree," points out Grace Honsberger in a matter-of-fact tone, apropos of nothing. At 93, 94 or maybe 91, she has lost interest in how old she is at this point, she says.

We all look at the tree. It is odd. And we laugh.

Maybe hope is found in brief moments of kindness; of levity; compassion for others. Maybe those moments are what we can hold onto and what we should practice. It's so easy to be cruel. It takes such little thought. There's no creativity in its bluntness and banality. All of us at some point in our lives have known it – in the schoolyard, from a parent, from a spouse even. It is so much more interesting, more rewarding, to build something beautiful and unexpected, however incrementally, moment by moment, and to share that way of being with others.

I think of the last piece the Payadora quartet played – Retrato de Milton by Astor Piazzolla. It was rousing and sad and sweet all at the same time. I had asked Wolkstein what she thought it was about. "It can mean something different to every person," she said. "But to me, it feels that it is speaking about the human condition, the tragedy and the glory of life."

Volunteering 101: Nine tips to help you get started
December 8, 2016
Shattering tradition: Why Christmas ornaments ain’t what they used to be
November 17, 2016 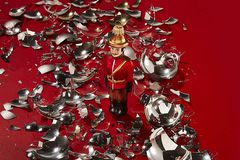 I’m on a tight budget this year. How do I navigate holiday obligations?
November 25, 2016
Follow Sarah Hampson on Twitter @Hampsonwrites
Report an error Editorial code of conduct
Due to technical reasons, we have temporarily removed commenting from our articles. We hope to have this fixed soon. Thank you for your patience. If you are looking to give feedback on our new site, please send it along to feedback@globeandmail.com. If you want to write a letter to the editor, please forward to letters@globeandmail.com.
Comments