Treating your dog or cat like a baby is not something to brag about. At best, an admission of parental love will get you pitying looks and a quiet corner to yourself at parties; at worst you'll be held up as an example of What Is Wrong With Society Today.

What could be a more perfect example of bourgeois folly, the unspoken assumption goes, than substituting a slobbery, stinky dog for a human infant?

Well, I beg to differ. My dog was my baby; and now that I have an actual baby, I see that my dog prepared me for motherhood far better than any of those What to Expect books.

When we adopted Lily the beagle from a rescue group, my husband and I were living the blissful life of DINKs - Double Income, No Kids. It was a sweet set-up: We travelled, went to fancy restaurants, slept late on weekends and kept fragile vases on low shelves.

Then along came Lily. Soon, everything we owned was coated in a fine layer of dog hair. Our schedules shifted to revolve around walks, off-leash parks and vet visits. When we moved to Toronto, we chose our house in the Beaches neighbourhood partly because we knew Lily would love Lake Ontario.

Sometimes we longed for the days when we could do dinner, a movie and drinks without worrying about what sort of "surprise" Lily was depositing on our living room floor.

But mostly, we marvelled at the joy this sweet, stubborn, goofy dog brought into our lives. When my husband taught her to shake paws, he kvelled like a proud papa. Our hard drive filled up with photos of Lily at the beach, Lily in the woods, Lily sleeping, Lily and her Christmas stocking filled with biscuits.

When our parents hinted about grandchildren, I would say, "But you have Lily!"

Then Lily got sick. That's the problem with dogs: They don't live nearly long enough for us to love them as much as they deserve.

An odd bout of panting led to chest X-rays, which led to a diagnosis of lung cancer - a tumour the size of a pop can in a 30-pound dog. With treatment, the vet told us, she might have a few more months. We walked down to the beach and let her off leash; she raced gleefully to the water's edge, stopping briefly to lick something disgusting that had washed ashore. Paws in the water, she turned to us and wagged her tail as if to say, "Ain't life grand?"

You meet the nicest people in animal hospital waiting rooms. As Lily outlasted the initial prognosis of three months, then went six months, then past a year - with no signs of illness apart from some slowing down we could rationalize away as age-related - her story of survival became an inspiration to other owners with red-rimmed eyes who'd just learned of their pet's cancer.

We swapped information about doctors and treatments, but most of all we enjoyed the company of other people who got it. My waiting-room friends never asked me if it made sense to spend all this time and money on a dog. Of course it made sense. She was our baby.

And then along came a real baby.

Nine months after Lily's diagnosis, I became pregnant with our first child. I read up on how to introduce your dog to your baby, all the while praying that Lily would make it that far.

Some days she seemed full of spunk, just like her old self, and other days she would walk into walls and pee in the hallway with a tired, helpless look in her eyes. Preoccupied as I was with the life growing inside me, I couldn't bear to think about ending the life that was dwindling in front of me.

At night we kept each other company in the living room; I retreated to the couch when I became too uncomfortable in bed, and Lily paced nearby. I'd pet her and try to get her to lie down, but she would just look at me impatiently, as if she had places to go. She would make her rounds, from the stairs, to the fireplace, to the window and back again, as I drifted off to sleep to the sound of her nails clicking on the hardwood floor.

Our son, Elijah, arrived 10 days early, and we brought him home on a Saturday night. All through my pregnancy, I'd hoped for the moment we finally got, when we introduced Elijah to Lily, and stroked his tiny baby hand against her soft fur. In my greedy heart I wanted them to have years together, for him to laugh at her wagging tail, for her to wait patiently for scraps beneath his high chair. But that tiny bit of grace would have to be enough. Lily died early Monday morning. I think I heard her whisper to Eli in their brief time together, "They love it when you pee on the couch."

My dog was my baby. She taught me that a slobbery, stinky creature could pee on my shoes, poop everywhere, complicate my life in a million aggravating ways - and at the same time inspire so much love that my heart felt like it would burst with happiness. She taught me and my husband how to go from two to three. She taught us how to be a family.

Now the routines of dog walks and vet visits have given way to diaper changes and pediatricians (whom, embarrassingly, I have referred to as "vets" a couple of times, though thankfully not to their faces).

When Elijah gets old enough to understand, we'll show him the photos of him and Lily, and tell him that for a few days he had the best dog a boy could ever want. In the meantime, when he's fussy at night, I take him out to the living room. The only thing that seems to calm him down is pacing the hardwood floor, from the stairs to the fireplace to the window, around and around again, until he drifts off to sleep. 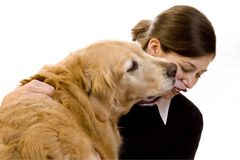 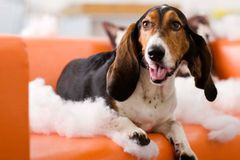