I dated my girlfriend for a year and finally asked her and her two kids and dog to move in with me. I thought I could handle the "ready-made family" as I also have a son. The kids all get along but her kids and dog are driving me bonkers. They are complete slobs and leave a trail of mess for me to clean (which I no longer do). I have tried talking to her and the kids and nothing seems to work. Although I love my girlfriend, I'm thinking I've made a huge mistake. What should I do?

If you're asking if I think you should boot your girlfriend, along with her two children and canine companion and all the rest of her assorted baggage, luggage and furniture (both metaphysical and actual) out on the street, hope she lands on her feet, and quickly forgives you so the two of you can go back to "dating," the short answer is: No.

In the words of Hunter S. Thompson (which festoon my latest tattoo – a stylized picture of a Ferris wheel): "Buy the ticket, take the ride."

And you bought the ticket, bub. Your ticket's punched, pal.

Look: Cohabitation's tough. Living under the same roof with someone can really drive you up the wall.

But it's worth it when it works because you wind up with someone who knows you inside out, and loves you anyway.

If I may boast about my own bona fides in the department for a moment. Recently, my wife Pam and I celebrated our 20th anniversary of cohabitation (16 years of marriage preceded by four of living together). People act like we climbed Everest without oxygen, sherpas, crampons or jerky.

Meanwhile, all around me, I see couples scrapping, squabbling, then separating, flipping through the Yellow Pages until they reach "Lawyers-divorce," then fighting over custody, access, child support, etc.

Why, I sometimes wonder, have the last few generations found it so tough to maintain stable couplehood?

Part of what happens, I think, is people forget their manners. Someday I'd like to write a book called Manners for Marriages, in which I'd say we should treat our spouses better, not worse, than everyone else.

Marriage (or common-law cohabitation) is, after all, really just another form of socializing – of mingling, if you will – albeit an intense and intimate one. Why wouldn't you treat your spouse with the same courtesy you accord others?

But maybe you're already nice to your girlfriend, and all this is irrelevant jibber-jabber.

If so, please disregard. My other thought for you – and don't take this the wrong way – is that maybe you need to run a tighter ship.

Actually, that sounds more high-handed than I meant it. To put it in a more upbeat fashion: Why not get everyone in the household to pitch in?

It's a lesson I keep having to relearn myself. With a three-kid, two-career household, my duty roster is extensive (Pam's too), often taking me late into the evening.

Meanwhile my boys are lying around like jellyfish, wiggling their thumbs on controllers, leaving their stuff strewn everywhere.

Like you, it was "driving me bonkers." (Pam too. Once she screamed at me and to the world in general: "You're lucky they don't cart me to the insane asylum from all the eternal mess I have to deal with around here!")

One night as I was scrubbing a pot, exhausted, at, like, 9:30 p.m., while the boys lay around playing video games, I thought: "This can't be right."

So I got a little Miyagi – a little "wax on/wax off" – on their horizontal heinies. I assigned them chores: Walk dog, make bed, unload dishwasher . In return they were to receive a (largely ceremonial) "honorarium" (my least favourite word), a.k.a allowance.

There was some squawking. But as time has unfolded, it's worked like a charm.

Chores build character. I've written an article about this: A University of Minnesota study concluded the single most reliable indicator of whether someone would become a successful, decent adult was not what school they went to, their parents' level of income, or whether their parents stayed together.

It was whether or not they did chores as a kid.

So it's good for them. And yes, I am happy to report, it has made my life easier, too.

Another generational generalization I'd like to make: We are spoiling the bejesus out of our children. And spoiling is the worst disservice you can do a kid, IMHO.

So put your kids to work! I don't know how old they are, but the study says it's okay to start them as young as age 2 . They can learn to put away toys, put clothes in hamper, garbage in can, sweep floor, etc.

In fact, best to start young, the study says, because the older they get, the harder it is "to indoctrinate them into the idea we're all in this together."

First speak to your girlfriend, of course, but then call a family conference and lay out the duty roster. Laminate it if need be, post it on the fridge. Do whatever it takes to convince them you're serious – and stick to your guns.

You can reasonably anticipate a little push-back at first. But I give you my Dave Eddie Guaranfriggintee™ things will run a lot more smoothly if you do as I suggest – and all thought of turning your girlfriend and her human and canine baggage into the street will recede into memory.

David Eddie is the author of Damage Control, the book. My friend needs to lower his standards
June 6, 2012 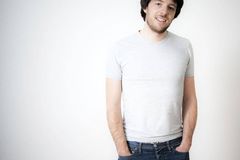