I recently discovered that, for several years, my husband has smoked on and off in secret - not at home, not in front of me, he doesn't want the kids to know. I'm not sure how I didn't smell it sooner, but it speaks to the level of skill and attention he's paid to not being caught. It has become a heated topic of discussion. Although he's offered several times to quit, he hasn't. I've bought him a pack of smokes, and told him to do so publicly.

Sneaking around isn't good for him, and certainly not for me either. Sure, I don't love that he's a smoker. However, the damage to the trust level has taken a toll. I'd prefer he be open and honest with this behaviour instead of continually denying that this is part of who he is. Your thoughts?

It's funny to think how much, in a single generation, the act of smoking has changed. Once upon a time people smoked in their offices, in restaurants, on airplanes, in movie theatres.

I was a teenage movie usher, and remember standing there with a flashlight, saying, "Smoking in the back seven rows only, please…"

Those were the days when the type of smoker you were was measured in packs-a-day: one, two, three, four. "Heavy" smokers didn't waste time buying individual packs; they bought cartons. A half-pack-a-day man was considered an avatar of restraint.

Now, just about every smoker I know is an on-the-sly, "I'm trying to quit/I only bum them," hole-in-corner smoker - and almost every smoking parent tries to hide it from their kids.

I am currently attempting to quit altogether, but I've been an occasional smoker. My trick at house parties was: pick a smoker, out on the porch, and mutter to him/her, sotto voce, "Look, I'm going to light a cigarette, but between puffs rest it in the ashtray near you, so if my son Adam comes flying out, he'll think it's yours."

Unfortunately, he was like Holmes to my Moriarty, Porfiry to my Raskolnikov - hard to fool, in other words. I still managed to slip a few past him.

But trying to slip a smoking habit past your wife? That's master-class stuff. For one thing, how does he get the smoky smell past your kiss test?

I mean, I assume you kiss him. And it's my long-standing theory that the reason God or evolution, whichever you prefer, invented the kiss is to check up on what your hubby's been up to.

My wife, Pam, for example, will kiss me, then pull back, gazing searchingly into my eyes for signs of mendacity: "Oh, so you had a scotch already?"

That's why I'd never try to hide any of my naughty, nasty little habits from her. She's too smart and I'm too dumb. Likewise, I'd never attempt to pull off a caper as complicated as adultery. I'd find myself in a cheap fleabag thumbing through the Yellow Pages under "Lawyers-Divorce," nursing a bottle of bourbon and tearfully gazing at a picture of my former family before I could say, "But it was just a meaningless fling."

If I were in your pumps, this would be my first fear: If he's able to hide something as easily detectible as a smoking habit, what else is he capable of keeping from me?

Call me alarmist, but I do believe there are such things as "gateway lies" in a marriage. If he realizes he can deceive you about smoking, drinking or what have you, he could try to get away with secrets in other areas, as well.

I believe you can sense this, deep down, yourself. You write that he should "publicly" declare himself a smoker. But could he not entrust his smoky little secret to you alone?

I think the smoking, while obviously a health concern, is the lesser issue here. More important is that you and he start cultivating what I would call a "culture of transparency" - what Robert de Niro called in Meet the Parents a "circle of trust" - in your marriage.

Show him you don't, or won't, sweat the small stuff, and encourage him to come clean about any other slip-ups, mishaps, vices or shortcomings on his conscience.

You don't have to "love" the stuff he winds up telling you. But we men like to know that you understand we have never been, are not and never will be perfect - but you love us anyway.

I know I can tell Pam the ways I've been weak, stupid, stumbled, fell short of the ideal, or flat-out messed up. She doesn't always "love" it, but she tends not to be under too many illusions and I know won't judge me too harshly.

The tradeoff is: If I ever did something major, she would know it within .0001 seconds of looking at my face. As opposed to waiting until the nanny's oddly Dave-looking son starts to exhibit strangely Dave-like mannerisms.

She can read my mind, at this point. Seriously, she sometimes will get mad at me just for thoughts I haven't even uttered aloud.

I would encourage you to encourage a similar Spockian mind-meld arrangement with your husband.

That way he will find it hard to deceive you should he start pressing something more ruinous than the tip of a butt to his lips.

David Eddie is an author and the co-creator of the TV series The Yard , airing this summer on HBO Canada.

Should I butt out of my boyfriend's friends' smoking habits?
October 27, 2010 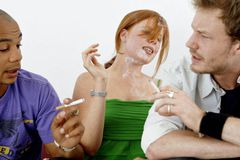 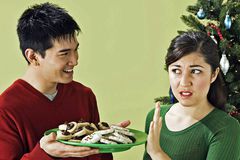