They always say with widows, don't sell the house that first year. What's the political equivalent? Don't lose your chance to lead the House?

So does that mean, as some recent political buzz would have it, that Olivia Chow should run for the leadership of the NDP, a post that her now hallowed late husband took to the greatest heights in the history of their party? (If she does, she will be "an instant front runner," speculated one political insider.)

Let's back up a bit. It's been barely a week since Jack Layton's remarkable state funeral amid a public outpouring of grief and gratitude that, despite what some cynics said, was wholly genuine. It was a lump-in-the-throat moment for an entire nation impressed by Mr. Layton's valiant struggle against cancer and stricken by his early death on the heels of his party's historic triumph.

By rights, Jack Layton and Olivia Chow, his vibrant wife, soulmate and political partner of 25 years, would have been gearing up together for their new roles in the fall session of the House of Commons, he as Official Leader of the Opposition, she as a three times-elected MP for Trinity Spadina in Toronto, but also, let's face it, as wife of the leader of the opposition.

In their case, these were not duelling roles – the couple lived, breathed and even danced politics. As Toronto municipal politicians, they captivated a city – and then, as federal NDPers, a country – on a bicycle built for two.

But alas, Ms. Chow instead became a haunting and inspirational figure throughout a week of public mourning for her husband – dignified, at times breaking into a lovely smile as she thanked the public, but other times oh so solitary and sad.

During the funeral, she had a stillness that broke your heart – a face usually lit up by her passion for people and political causes, immobile and contemplative. She sat so composed – holding a white feather – that it made her seem even more alone in a room that worshipped her.

"I hope the press doesn't turn this woman into a Canadian version of Jackie-O," ran one snide comment on the Globe's website. "She is not even close."

Oh, give me a break. Olivia Chow, a strong, successful politician, did the whole country a favour by being as graceful as she was during this past week.

But by week's end, people weren't turning her into Jackie O, they were turning her into a future prime minister. And that gave me pause. Hold on, Nellie. Aren't we missing a few steps here?

At 54, Olivia Chow must find her own way forward. And not on the coattails of sympathy, or sentimental belief that she and Jack Layton were interchangeable. They are not. And besides, we don't do that kind of spousal political inheritance in this country.

"We don't, but this isn't that," insists Robin Sears, former NDP political player and now with the consulting firm Navigator. "These are two people with political careers and capabilities who got married and combined their skills. She has the credibility and is enormously respected … in her own right."

Ms. Chow herself declared in a video shown at the funeral that she is focused not just on her grief but on the future: "Yeah, I'm sad. We're sad," she said. "But let us not look behind us, let's look forward. Look at what we can accomplish together to make sure that Jack's voice is not silenced …"

I've always been impressed by Olivia Chow's feistiness. A video of her on her website, lambasting the Conservatives for their lack of attention to public transit, shows her grinning as she sticks the shiv in: "John Baird told us to take a hike."

Hong Kong-born, she emigrated to Canada at 13, studied fine arts, was a sculptor along with making her own way in political life, first as a school trustee, then for 14 years as a city councillor championing the rights of the homeless, advocating for good public transit and being named by NOW magazine as Toronto's best city councillor.

She's determined – she ran and lost twice before gaining her federal seat and keeping it through some very tough political battles. She is a politician through and through. I don't think she knows how to go off-message.

But despite her obvious talents, some political observers I talked to, mostly off the record, think a run for the leadership would be disastrous for her.

"She'll be compared to Jack every minute."(Won't anyone who runs?) "She can't speak French."(She does speak Cantonese.) "She has a different set of skills."

One activist committed to helping more women run for office, argues it's better for her to run up front "rather than to become a power behind the throne, the holder of Jack Layton's flame."

And Donna Dasko, national chair of Equal Voice, a non-partisan organization devoted to getting more women to run for office, concedes that if Olivia Chow did run, there might be some "blowblack and resentment" within the party. Nevertheless, because she "absolutely has the legitimacy to run," says Ms. Dasko, "the Jack factor would net out positively for her."

First, presumably she'll need some rest after the past gruelling year – imagine helping your husband through prostate cancer, hip surgery and then a final terminal cancer, all the while campaigning ceaselessly.

Here is what I wish for Olivia Chow: that she not get subsumed by her husband Jack Layton's legacy, and that she fulfill her own political and personal destiny. 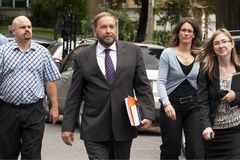 The NDP should not rush into a hurried-up leadership race
September 2, 2011 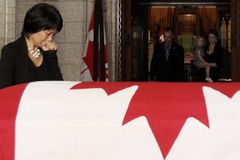 Layton and Chow: A love story and political alliance come to an end
August 24, 2011 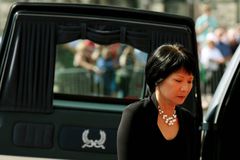 The NDP can use this unwelcome opportunity to galvanize support
August 23, 2011 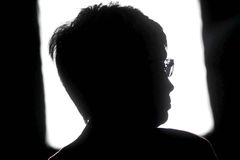