A teenage girl snaps selfies in her bedroom, duck pouting, shades on, shades off, working her angles. She uploads one of the photos to Facebook, sits back and waits.

Instead of the "likes" and approval she'd hoped for, the girl gets a storm of venomous comments: "No need to see your ugly face in the morning." "Are you a girl or a boy?" "I bet we could get her off the Internet … I know where you live."

The girl logs onto another website called "HeartMob," reports the comments and gets some more humane messages in her inbox: "So sorry to see this. Take care of yourself – you're great!"

Launched today, HeartMob is an innovative new website with a lofty aim: to end online harassment. The website lets those who are being harassed online more seamlessly report their abusers, put in "help requests" for support and get access to psychological, legal and safety resources if they need them.

More notable may be the website's mission to embolden bystanders to step up and speak up for those being targeted online. When they pass a security check and sign up, bystanders (or "Heartmobbers") are encouraged to help document harassment with screen grabs and report abuses on behalf of victims to the social networks where it happened. HeartMob also asks these volunteers to send some kinder notes to the people who've just been eviscerated online, sometimes for something as innocuous as a morning selfie.

For anyone who has been bombarded with a steady stream of scorn online, it's welcome news. On Friday, Gregory Alan Elliott was acquitted on all charges in Canada's first criminal-harassment trial involving Twitter, stemming from allegations that he had harassed women's-rights activists Stephanie Guthrie and Heather Reilly on the social network. While some saw the ruling as a victory for freedom of speech, many others worried that it spells a rough road for women who are routinely attacked and threatened online.

"If, in the eyes of the law, the harassment of Stephanie Guthrie is par for the course, then we can look forward to many more years of the status quo – women getting harassed, and everybody saying that it's somebody else's problem," wrote Slate's Amanda Hess.

Circumventing courts and the often ineffectual "block" functions on social networks, HeartMob (tagline: "Online harassment is killing the Internet. You can help save it.") hopes to put the power back in the hands of the silent majority on the Internet: the non-trolls. According to recent findings from the Pew Research Center, 40 per cent of adults have been harassed online at some point in their lives, and some 73 per cent have witnessed it happening to others. (Women age 18 to 24 were disproportionately targeted: 26 per cent had been stalked online and 25 per cent had suffered sexual harassment online.)

Aside from bystander intervention, the website also lets people document abuses that have cropped up across multiple media platforms, building a more compelling case history of harassment for companies and law enforcement down the line. HeartMob also partnered with the five major social-media companies – Facebook, Twitter, Tumblr, Reddit and YouTube – to compile a more streamlined guide for reporting abuses on each of those platforms.

The website is the brainchild of the group behind Hollaback, a decade-old international movement that combats street harassment, including geotagging where perpetrators are in the city, and rallying bystanders to speak up when they see people being harassed in public. Eventually, HeartMob wants trained bystanders to actually reach out to trolls with the hope of reforming them (empathy, anyone?). For now though, the goal is to reduce trauma. The Globe spoke with Hollaback co-founder Emily May about tipping the scales on a mean Internet.

It lets people share their stories, show other people the extent to which harassment happens and then ask others to come and help them out. It could be sending a kind message. Or it could be asking others to report the harassment for you, to the social-media platform where it happened. Or asking them to screen-shot the harassment for you if you're getting a lot of it, so that you don't have to be further traumatized by looking at it. We're asking folks to show up from all over the Internet and stand up against online harassment.

Women who feel harassed online were shown last week that they can't necessarily rely on the court system in Canada. And many women reporting slurs and threats to the social networks that host them are being told it doesn't technically qualify as abuse, not by company standards. Are you putting the fix back in the hands of users themselves?

We hear some people talking about the need for stronger legislation and others talking about how the social-media companies need to get it together and solve these problems. Others suggest that people who are harassed online just need to protect themselves better.

We know that it's not just one thing that's going to single-handedly end online harassment. There's work that each of us can individually do, not just sit around and wait for the courts and the social-media companies to figure it out.

For us the answer really sits with community accountability. We believe there are many more people in the world who are standing against online harassment than those who are perpetuating it. This is designed to build an army of good. We need to give all those good folks out there a voice. This is good for people on a personal level but it's also good for the future of the Internet.

Does it actually build a more compelling case if 20 bystanders are alerting a company to a troubling post, rather than the one victim?

Each of these social-media platforms has intricate and specific ways of assessing whether a threat is credible, and where it sits on the queue of threats that they are addressing. But we need to be reporting. They need to know that it's not just the person being harassed that thinks it's a problem. It's a much larger segment of their customers troubled by this kind of harassment.

What does online bystander support do for victims?

Our No. 1 goal is to reduce trauma for people who have been harassed online. We know from running Hollaback for the past 10 years that just the simple act of documenting your harassment and sharing your story on a platform can reduce trauma. We want to take that one step further and show people that not only are others listening to what they're experiencing, they want to help them, too.

How do we galvanize bystanders?

When we've talked to potential bystanders they say the No. 1 thing that stands in their way is that they don't know how to help. Sometimes they're not sure if something is harassment or just some kind of inside joke that maybe they're missing. They're not sure what they can do for that person and they're worried about making it worse or overwhelming them. We want to remove that barrier so that people who want to help know how to do it.

Are you encouraging bystanders to engage the bullies?

We are looking into ways to do that, ways that are non-violent and start to explain to the harasser, "Hey, while you may think saying 'I want to rape you' is funny, the way that is heard [by the target] is, 'I can't leave my house now.'" But we are definitely not in favour of harassing the harasser. We want to fight fire with water.

What do you say to those who believe that when we curb abusive content online, we also limit our collective freedom of expression?

My response would be free for who? When people receive violent threats and harassment just for having an opinion online, it has a silencing effect. I don't want to be on an Internet where women, people of colour and others who are disproportionately affected by online harassment don't feel free to express themselves. 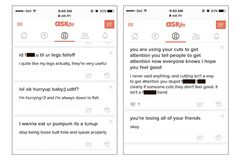 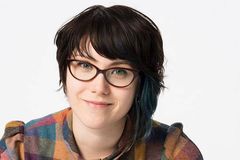 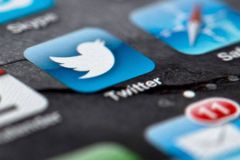