A paycheque isn't just money in the bank. Wages influence choice, decide career paths, facilitate equity or widen inequality – and not just at work, but also at home. That's one reason why countries with the smallest gender wage gaps also have the highest female participation rates, and more equitable sharing of household cooking and cleaning.

The role of Canada's gender wage gap was highlighted indirectly this week in a report released by the Canadian Federation of Independent Business. The study calculated that public sector workers enjoy a higher pay premium compared to their private sector counterparts – as much as 13 per cent overall for federal employees. The premium is lower but also exists for provincial and municipal workers. If vacation benefits and other leave is calculated, public sector employees work on average two hours less each week. The pay premium has shrunk slightly since the CFIB's last report based on 2006 numbers, but due to changes in the census forms, author and economist Ted Mallett says that direct comparisons can only be drawn with caution.

Still, reading the study, one could easily image those 3.6-million Canadians (the public sector accounts for one in five jobs) enjoying their taxpayer-funded largesse with feet up on their desks, dreaming of Florida retirement retreats. Indeed, the CFIB study pointed out, when you add in benefits and pensions, the premium more than doubles for federal workers to 33.2 per cent.

But there's an equality story buried in those numbers, that makes those public sector wages an especially important part of Canada's wage policy discussion. The pay premium is not evenly distributed across the public sector. As previous research by the Canadian Centre for Policy Alternatives and Canadian Union of Public Employees have found, the people benefiting the most are women and minorities. Not fat-cat bureaucrats, but cooks and cleaners and clerks who are getting access to above-the-poverty line wages and sick leave benefits they would have far less access to in the private sector.

According to a 2011 study by CUPE economist Toby Sanger, in male-dominated occupations in the public sector the premium actually goes in the opposite direction. Auditors and computer programmers typically earn significantly less on average than those in the private sector. Female-dominated jobs such as nurses and customer service clerks earn significantly more.

This suggests the most significant factor in the pay premium is a smaller gender wage gap – thanks largely to more stringent pay equity legislation. A gap still exists, but the CCPA study released last October pointed out "that salaries are highest in the public sector precisely for those groups who experience the greatest discrimination in the private sector."

It's not just women who benefit, but ethnic minorities as well. The CCPA calculated that an aboriginal worker with a post-secondary degree makes 44 per cent less than non-aboriginal peers in the private sector. In the public sector, that same worker earns only 14 per cent less.

Of course, the three studies represent the different but legitimate perspectives of the organizations, interests that weigh heavily into policy debates, such as raising minimum wage. The CFIB is invested in optimizing private sector wages for businesses wrestling with labour costs and shortages; CUPE and CCPA are focused on workers, income fairness and poverty. The reports differ in methodology (the CUPE study is based on the 2006 census, but there's nothing to suggest the wage patterns have changed), and their percentage calculation of the overall pay differences between the sectors varies widely.

But what these studies show is that wage comparison between the two sectors require a more nuanced discussion than stereotypes. Two of the CFIB's recommendations are no more pay raises above inflation until the private sector can catch up, and a better assessment of pension benefits. But which way should compensation move, and for which group of workers? In the private sector, many employees – especially those just entering the workforce – have seen pensions and benefits shrink, increasing stress and creating long-term uncertainty. One way to close the gap is to increase minimum wage. But as Mallet rightly points out, "Simply wanting to set wages at a high level is not enough to make it sustainable."

But the pay premium can't be easily closed on the public sector side without most affecting women, minorities and less-educated workers – workers that typically earn less than $60,000, as Sanger points out. To catch up, the private sector would have to pay those groups more. "What's the real point here?" he asks. "Should public sector workers reflect the increasing inequality of the private sector, where cooks, cleaners and clerks are often paid less than poverty [line wages], while CEOs receive millions of dollars? Or should we have more equitable pay for all?' Of course, one way to narrow the gap is to improve pay equity – especially valuable for the private sector that needs trained, highly educated female talent. More equitable wages and benefits also explain why more women chose public sector jobs, where, the CCPA report observed, salaries are not left "to the magic of the marketplace."

Another worrisome statistic suggests that women may actually be abandoning male-dominated industries, just when they are needed most. In 2014, 80,000 women dropped out of the labour force – the highest rate in 15 years. Sanger, who highlighted the number in a recent blog post, said most were between the ages of 40 and 54 – so it wasn't to start a family or retire. The jobs they left were often lower-paid positions. Some of the industries with the biggest decline were manufacturing, trades and finance, including middle management positions, while male workers in those same industries increased. Their exodus, says Sanger, suggests that Canada's labour force actually became more gender-segregated last year.

Maybe this was a one-year blip. Why those women jumped ship isn't clear. But it's certainly not unreasonable to assume that their paycheques had something to do with it. 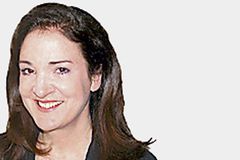 Leah McLaren: How men’s rights groups are distorting the debate about equality
March 12, 2015 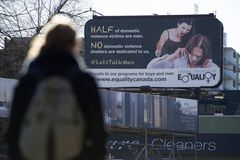 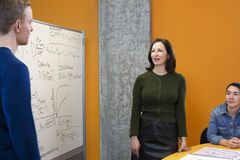