It's 7 a.m: I'm barely awake, sawing through a log of raw meat with a bread knife.

There's a cold puddle of drool accumulating on my foot, as my dog trembles with excitement under the kitchen counter. Gagging, I flick a big chunk of the meat into her bowl, top it off with a scoop of puréed sheep stomach, turn on the coffee and crawl back into bed.

A year ago, I was among a niche pocket of weird dog ladies who fed raw. A number of dog breeders, behaviourists and trainers recommended it – but the average owner at the park thought I was certifiably crazy.

But now, feeding raw – that is, feeding your dog hearts, necks, livers, kidneys, bones and muscle of animals such as chicken, lamb and rabbit – is becoming more mainstream. It's a $100-million industry in the United States, and while there aren't market figures available for Canada, the Canadian Association of Raw Pet Food Manufacturers says raw companies are multiplying rapidly, with some reporting a 30 to 40 per cent growth in business last year.

It doesn't come cheap: For a 50-pound (roughly 23-kilogram) dog, feeding raw costs about $2 to $8 a day compared to $1 a day for grocery-store kibble. But more and more people are willing to pay the price, says Inna Shekhtman, manager of Red Dog Deli, one of British Columbia's largest raw dog-food manufacturers.

Her company goes all out – adding juiced, organic veggies to the raw-meat mixture, to mimic the "semi-digested greens that a wild dog would find in the stomach of its prey," she says.

"Dogs don't have microwaves or grocery stores in the wild," she says with a laugh, adding that she believes a dog that eats raw will lead a longer, healthier life than one fed traditional dog food.

The raw theory has no shortage of critics, however, especially in veterinary circles. (I've broken up with three vets in one year over my feeding choice.)

"It's a fad, absolutely," says Danny Joffe, medical director at Calgary's Animal Referral and Emergency Centre. "As a scientist, I need evidence – and there is zero scientific study here. Just anecdotal stories on the Internet. And sorry, that's not good enough."

Dr. Joffe says owners should stick with kibble that is "based in good science" – brands such as Iams, Hills, Purina and Royal Canin. He has written papers in peer-reviewed veterinary journals and lectured across North America about the perils of a raw diet (including what he views as the human risk – salmonella levels in the home, and dogs eating raw meat, then licking a human's face).

But Dean Ricard, president of the Canadian Association of Raw Pet Food Manufacturers and owner of Edmonton's Mountain Dog Food, which sells nearly three million pounds of meat a year, says safety is at the top of his mind too.

The raw pet-food industry in Canada is unregulated – something Mr. Ricard wants to change. He's recently created a set of guidelines on how to operate a safe raw company. "We want protocols and processes and inspection agencies coming in," he says. "Right now anyone could just start a raw company out of their kitchen, and that's so worrisome."

"Most folks think that kibble doesn't go bad, so it's a good product. But why isn't it consuming itself? Why isn't bacteria liking it – what do the bacteria know that we don't know?"

It's a criticism heard often by the Pet Food Association of Canada, whose members include the vast majority of kibble companies in this country. "Those who criticize are just misinformed – they believe what they read on the Internet," says executive director Martha Wilder. "The fact is kibble is highly tested, based on decades of science, and it's formulated in accordance with a dog's complete nutritional needs."

Gwen Greene, however, is one of the converted.

On a kibble diet, her dogs were "overweight, with no energy – scratching all the time from all the allergies," she says. "These were our fat, miserable, lethargic dogs.

"We were spending $500 a month on pain management, weight allergy, arthritis medications," she says. "And our backyard was just rancid – three dogs, going out there three times a day – disgusting." She decided to try raw patties from the Toronto raw food company Keoni. She says she spends $236 a month on raw food for all three of her giant pooches. A year later, "they are completely different dogs," she says. "They all have the energy of puppies, we can't keep up with them. And our vet just gave them all perfect bills of health."

The best part? "Their poop is wonderfuuuul!" she says, describing it in TMI-detail. As for the safety concerns, she's not fazed. "If you know what you're doing, and you use common sense, anyone can do it."

Kibble vs. raw: a cost comparison

An approximate cost comparison for feeding a 50-pound dog:

What's in your dog's dinner?
Is a raw food diet for dogs crazy or conscientious? Weigh in below and share your tips for feeding Fido. (Mobile users click here)

My rescue dog is perfect. But how long will this 'honeymoon' last?
August 1, 2011 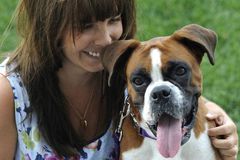