In this series, we explore how our online identities intersect with who we really are.

If you're peppering your texts with multiples of the same emoji, thinking it amplifies effect, chances are you're not generating much beyond a yawn. Yes, emojis seem to be essential for so-called "emotional work," the effort of managing feelings and emotions to fulfill a role, but adding more than one of the same emoji appears to be a waste of time, according to a study published this month in the Journal of Language and Social Psychology. Frowny face? Sorry, but at least now you know. The Globe and Mail's Dave McGinn spoke to lead researcher Dr. Monica Riordan, an assistant professor of psychology at Chatham University, in Pittsburgh, about the study and what the takeaway is for texters.

Tell me about how emojis are a form of emotional work.

We use text messaging to communicate with many different types of people – spouses, co-workers, friends. And with every person, we perform a different role. Each social role requires that you perform certain actions to remain in the other person's good graces. When a friend says a joke, even if you don't think it's funny, you might laugh just because that's your job as a friend. Emojis help us perform all these little actions. When we use the laughing with tears emoji, we're not actually laughing with tears. It's not even real affect; it's a performance of affect.

What is the relationship between emojis and joy?

I had several different text messages, some negative, some positive, and every single one of them had a different emoji attached to it, so I was actually very surprised when I found such a consistent pattern, that there would be higher levels of joy across all of these different text messages and emojis simply when emojis were present versus when they were not. In retrospect, I think it makes a lot of sense. Emojis add almost an element of playfulness, and playfulness tends to translate into joy when you're talking about emojis.

What sort of messages saw joy amplified by adding more than one of the same emoji?

There was a very small, almost minuscule effect, to using more than one emoji. The biggest and most significant difference was between no emoji and at least one. But once you get to two or three, it really doesn't make that big a difference. It increases the joy and positive emotion a little bit more, but not enough to make me think, "Oh, it's worth putting in multiple emojis every time I text."

So it's totally unnecessary to add three or four laughing with tears emojis to convey how funny something is. But in some cases, such as a message in which a person said they lost their keys that was followed by three key emojis, there was no effect.

Yeah, the lost your keys one – you've got nothing there.

What is the takeaway of this study for everyone out there texting?

Emojis take a lot of time and effort, but the time and effort that you put into these emojis is actually really good. It helps us develop and maintain relationships with other people. And it helps us do this very effectively. If I text my husband and say something like, "I'm stressed out," and he texts back a heart emoji it's actually a very simple way of him saying, "I'm sorry you're stressed out. I hope you're going to feel better. I love you."

What about the argument that it's actually a diminution of language – the 'It sure ain't Shakespeare' objection?

Emojis are simply another form of language. Just like words, emojis will evolve, develop new meanings and rise and fall in popularity. We'll create new ones and get rid of outdated ones, as society changes and cultures change. As long as emojis serve a purpose, for communication, self-expression and relationship-building, we will use them, same as we do words, for these purposes. "For there is nothing either good or bad, but thinking makes it so" – Shakespeare.

What online comments can reveal about the person behind the keyboard
May 9, 2017
New York’s MoMA acquires original set of emojis
October 28, 2016
The Bible Emoji: It’s not the apocalypse, just the age-old tradition of interpreting the Good Book
June 3, 2016 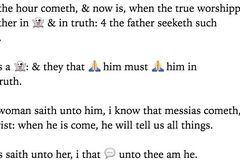