My boss has been carrying on an overly "friendly" relationship with a colleague of mine for years now. When asked, everyone in the office seems to find it inappropriate, but no one can figure out how to deal with it - whether to approach the individuals directly or even go as far as reporting this to human resources. I think we're all familiar with the term "work spouses," and while it's great to have a good support system and close confidant, I'm almost certain there are boundaries that one needs to uphold. In this particular case, I'm pretty sure sitting on your boss's lap as he massages your neck is considered crossing the boundary. What's your take on this?

I'm not the first to observe that we spend so much time at work these days, the office becomes more home than home for many of us.

In The Time Bind: When Work Becomes Home and Home Becomes Work, the sociologist Arlie Russell Hochschild observed that people she studied often seemed happier and more at ease at their jobs than at home - especially if they had kids.

Work was where everything was organized, there were espresso machines, and everyone flirted and joked around in dry-clean-only clothes. Home was where laundry and dishes piled up, where sullen children and resentful spouses lurked.

As one worker Dr. Hochschild interviewed put it, "I come to work to relax."

Now, maybe your boss and colleague are getting a bit too relaxed at work. Certainly, there is the ick/ew factor. You have a right to be spared all this PDA action.

But what actually to do about it? That's where it gets a bit hazier. People will tell you, "Most offices have written guidelines about these sorts of things: Just follow those."

But that's simply not true. Actually, many offices don't have a written policy vis-à-vis office romance. Anyway, it's not clear that your boss and colleague are involved in an "office romance."

Before you act here, I think you have to ask yourself two questions: 1) How much do I care? And 2) Why, exactly, do I care?

One perfectly good reason to care is: It can confer an inordinate amount of power on the colleague flirting with the boss.

I used to have a boss who exhibited similar behaviour toward his wholly incompetent, 23-year-old, buxom, naughty-librarian-esque office manager. They would "dirty dance" at parties. I never saw her sitting on his lap, but once he did have her on all fours, in his office sorting through file folders that were on the floor for some reason.

We, his minions, muttered, mumbled and kvetched - but paid it no never-mind until we realized she wielded an unholy baton of power. (We called him "King Lear" because he was out of the office a lot and relied on his spies and stoolies for intel, but listened to his Regans and Gonerils and fired his Cordelias.)

A friend of mine learned the hard way. They exchanged angry words. Next thing he knew, he was out on the streets, updating his résumé on Workopolis.

Another good reason for caring is if you feel it impedes your boss's ability to perform his duties: If he's so hypnotized by this vixen, he's making bad business decisions.

Also, whether it's "consensual" or not, clearly there may be a power-dynamic concern here. Would she be sitting on his lap/getting a neck rub/whatever other naughtiness they might be up to if he were the janitor?

These days, so many of us meet romantic partners at work, but if he's using his position to get a leg over, that's a problem.

If you think either of the above obtains, then perhaps you can quietly or even anonymously rat him out to HR or his superior.

But caveat rattus: Dropping a dime on your boss is a strong move, and could blow up in your face like an exploding cigar. It could get back to him. Or it could turn out your boss's boss is more loyal to your boss than to you.

Either way, it could prove to be a big (pink) slip-up, career-wise.

Another option: You could talk to your boss directly. Say: "You may not be aware of this, but all this lap-sitting and neck-massaging at work is making some of us uncomfortable."

Whether you pull the trigger on this scenario depends on your assessment of the temperature of your boss's temperament and your relationship with him.

If he's cool, and your relationship is cool, he might just chuckle ruefully and say: "Ah, yeah, maybe you're right. I should set a better example. Thanks for pointing it out."

If not, though, he might say: "Oh, thanks for sharing. And here's something I'd like to share with you. You have until the end of the day to clear out your desk."

Again, it all depends on the questions: How much do I care? and Why do I care?"

If the answers are "a lot," and "for good reason," then by all means: Do what you have to do.

But if the answers are "I don't know" and "I'm not sure," then the best course of action may be: Just leave it alone. Grin, gag and bear it.

David Eddie is an author and the co-creator of the TV series The Yard , airing this summer on HBO Canada. 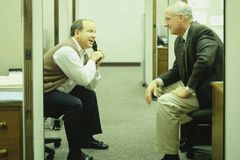 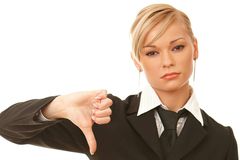 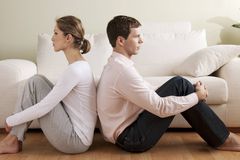 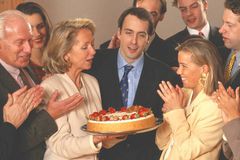