Single and 40, I moved back to Toronto after a decade of working on human-rights projects in developing countries. I was ready to settle down and find a soulmate, preferably one who liked to travel and could locate Afghanistan on a map.

Dating in my 40s was not going to be like dating in my 20s. I was wiser, more confident and knew myself better. On the flip side, the unromantic conditions of my overseas life had caused severe loss of dating know-how.

Right, a leisurely activity where you chat with someone over a drink or a meal to discern whether an intimate long-term relationship is possible. Conversation should be relaxed and flow without awkward silences. If you find the person attractive, interesting and fun, you arrange to meet again. I could do this.

My reintroduction to dating in Toronto was set to happen at a hip downtown bar with a couple of friends. I donned a pair of jeans, a stylish top, some lipstick. Memories of university romances danced in my head as I practised flirting in the mirror while holding a glass of wine. This became known as Plan A.

OMG. Not only were all the patrons under 30, but the women were dressed in sexy outfits I would never wear. Predictably, no one noticed us except the bartender. While we were discussing our next move, music suddenly started blaring so loudly it killed the conversation. We bailed. Our trio of not-wanting-to-be-cougars raced back to my place and my stockpile of red wine. It was 10 p.m.

Plan B: Sign up for an evening of speed dating.

Three-minute conversations are incredibly short. Once you've found out each other's professions and hobbies, likes and dislikes, it's already time to move on. There's barely enough time to jot down a name, let alone envision holding hands on a moonlit beach. At the end of the evening, the faces and conversations blurred together; not a single guy stood out as someone to see again.

Plan C: Meet a guy at a class or a sports league. Meeting men through mutual friends was no longer possible, as none knew any single and dateable guys. So I joined a beach volleyball group. Sundays that summer became a joyous mix of sand, sun and beer. And I met someone.

We dated for six weeks before I broke it off. To me, that seemed equivalent to six months in single-and-fortysomething years.

Encouraged by such a long relationship, I grew bolder. Conversations with other singles netted valuable information about meeting mates online. I was amazed at how quickly and openly they broached the topic of Internet dating: "Hi, so which sites are you on? How are they?"

Still, I was skeptical. Dating online screamed, "I am an old-fashioned dimwit that's completely unable to meet and/or converse with potential mates." But single friends eventually convinced me that online dating was the most straightforward way to find a partner once you're out of school.

At first, I scoured each profile and crafted individualized messages. About eight dates in, I got my groove and began to send more messages with fewer words. I started dating up a storm, sometimes two a night back to back.

The guys were entertaining, the restaurants nice, the conversations fun, but disappointingly there were no real sparks. None turned out to be the optimistic, self-assured traveller I was looking for. My approach needed a change. Instead of a restaurant, perhaps an activity would give me more insight into his personality and possible shared interests.

So my next date unfolded at a photography shoot for a band. He took photos with a passion that was endearing. Photography, which we both enjoyed, was also a good focus for our conversation. Sharing the same sense of humour, we laughed and talked into the wee hours of the night. Parting, we set up a second date for the coming weekend.

On Saturday at my place, two coffees were steaming on the table as soft music played in the background. According to my research, the second date was when you delved into your potential partner's past to suss out any family skeletons or Ponzi scheming. I wanted to be in comfortable surroundings in case of an unpleasant secret.

In this intimate setting, we each shared our biggest life challenge. His was an unfinalized divorce, mine a new career path but no actual job. Mulling it over, we concluded our baggage was manageable in the bigger scheme. After all, dating in your 40s is not a fairy tale. But was the chemistry from the first night still there?

Butterflies in my stomach, I nodded ecstatically. It was a supreme Bridget Jones moment, and revealed that some aspects of dating remain the same at any age. This was a guy worth pursuing.

My final tally: an awkward bar night, a speed-dating adventure, a summer fling and 19 decent Internet dates to find one terrific soulmate. Not bad.

It was at times exhilarating, at times overwhelming, at times disheartening, but I wouldn't change a thing. Opening up to new methods of dating, while remaining true to myself about the type of guy I wanted to meet, was part of the experience.

A year and a bit later we're still together. Fingers crossed. 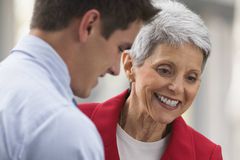