Before going out on a date, Todd Simkover runs through a mental checklist that he has worked hard to compile: Make sure the setting isn't too noisy. Don't do all the talking. Be considerate of her personal space. Act more laid-back and less formal. If her shoulders are directly opposite yours, that's a good thing; if she keeps playing with her phone, well, that's not so good.

Dating can be tricky for anyone. But Simkover, a 34-year-old graduate student at York University in Toronto, needs those reminders because he is one of more than 250,000 adults living in Canada with an autism spectrum disorder (ASD). And yes, ladies, he is available.

At first glance, the characteristics of people with ASDs – lack of eye contact, narrowly focused interests, idiosyncratic speech – might give the impression that they're not interested in relationships and marriage.

In fact, there are widespread misconceptions that people with ASDs lack empathy and engagement, and don't want any sort of meaningful connection. In reality, people on the spectrum covet intimacy as much as anyone; they just lack the tools to find it. And with scarce funding for autism primarily geared toward children, the tools themselves are also hard to find.

The latest statistics reflect that problem. According to a groundbreaking report published this year by Toronto's Redpath Centre, people with ASDs are disproportionately single compared with the rest of the population. Only 32.1 per cent of those surveyed indicated they ever had a partner, while 9 per cent stated they were currently married. In the general population, meanwhile, about half of all adults are married.

Not everyone with autism is interested – or capable – of pursuing traditional friendships, let alone romantic relationships. But individuals such as Simkover, who has Asperger syndrome and thus falls on the high-functioning end of the spectrum, possess a clear desire for romance.

Yet the daily challenges that people with ASDs face – interpreting non-verbal communication, engaging in unfamiliar topics of conversation and managing social anxiety – can be formidable obstacles.

"Sometimes I feel that girls see me as awkward and not suitable for dating," Simkover said. "I must have been on over 50 first dates, and out of these only a few led to a second or third date."

The playful banter, subtle language and overall abstract nature of flirting can seem absurd from the perspective of people on the spectrum, because they see the world in a very literal way.

That makes it difficult for them to understand the difference between looking and staring, or the appropriate way to smile at someone – little things that can make a difference in social situations.

So Simkover needs to prepare extensively for his dates, breaking down everything into a step-by-step process. Any deviation from the plan, such as a last-minute change of venue, can be very stressful for people with ASDs, and he has had to learn to be spontaneous.

On one notable occasion, he made a spur-of-the-moment decision to break the ice by going to a diamond store before dinner. After all, diamonds are a girl's best friend, right?

Finding the balance between planning and improvisation is easier said than done. According to Maria-Niki Bardzakos, a life-skills specialist at Giant Steps Montreal, it can take years of training before becoming proficient. Founded in 1981, Giant Steps provides special education programs for students aged 4 to 21 with ASDs, and also works with adults.

"Sometimes, educators misinterpret structure with rigidity," Bardzakos said. "It's important that we provide structure, but at the same time promote flexibility in order to allow them to be their own person."

The Redpath Centre report, which surveyed 480 Ontarians 16 to 66 years old, revealed that only half of those with Asperger syndrome were diagnosed before the age of 21, meaning that many of them went through long stretches unaware they had the condition.

Without a diagnosis to provide a framework as to why they struggle to forge intimate connections, these individuals are prone to a host of other mental-health disorders, including depression. (The term Asperger syndrome has since been discontinued by the American Psychiatric Association; new cases are assessed as ASDs on a severity scale.)

"There's sort of this embedded thought where they walk through life feeling like they're to blame for relationship problems," said Dr. Kevin Stoddart, director of the Redpath Centre and one of the report's lead authors. "They're constantly feeling guilt and all kinds of negative self-appraisals because they're not reading people."

The vast majority of resources are devoted to early intervention and childhood programs, leaving few facilities where adults on the spectrum can seek support. The Redpath Centre is one of the only clinics in Canada to offer dating skills coaching and couple therapy.

The methods used vary on a case-by-case basis, but Stoddart and his team often begin with sessions focusing on emotional education.

Since some men with ASDs regularly read about dating at home, Stoddart keeps a selection of books in his office (with titles such as The Art of Kissing) for use during bibliotherapy. "Basically, you study dating as you would study language," he explained.

Before she was diagnosed with Asperger's at 25, Alex, who requested her last name not be used, always knew that she had a different conception of romance. For example, she finds fulfilment in a relationship just by physically being in the same room as someone else, even if they're not actually talking, looking at each other, or touching.

Some of her past boyfriends labelled her as uncaring and she struggled with feelings of abandonment. After an argument, someone on the spectrum isn't likely to initiate a resolution, making it difficult to dig out of the troughs that plague all relationships.

"Prior to my diagnosis, I used to always think that, one of these days, I'm going to wake up and I'm just going to be an adult, that I'm suddenly going to understand things. I felt like my friends were sailing through life in possession of a secret I didn't have," she said.

Now 28, engaged and working as a dental receptionist in a downtown Toronto office, Alex is able to look back on her previous relationships and understand her current one in a new light.

Upon meeting her fiancé, David, last year, she disclosed her disorder while on their first date. Because of his work as an early childhood educator, David had experience with ASDs and was unfazed.

Alex's success finding a mate, as opposed to Simkover's struggle, is not coincidental. Certain qualities of people with ASDs, such as being very logical and straightforward, can be attractive.

"In regular relationships, a lot of men have to deal with doublespeak and reading between the lines. With Alex, I find it's not there, and I love it," said David, who met Alex on an online dating service.

The Internet can provide a greater facility to meet people at a distance and can slow down the pace of social interaction, which may be beneficial for people with ASDs. The downside is it can also be very isolating and lead to risky situations given that those on the spectrum have a hard time distinguishing predatory behaviour.

Just to be safe, before becoming "official," Alex introduced her new man to her family to ensure he didn't pose a threat. The verdict: David received an unanimously positive response. 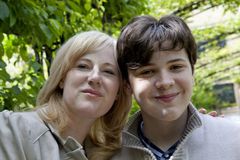