On the dating website SugarDaddie.com, which pairs off young attractive women with wealthy older patrons, registered female members reportedly outnumber men eight to one. The site lists the usual descriptors – body type, eye colour, ethnicity, smoking habits – but also gets men to specify their annual income and net worth. It's a seriously retrograde yardstick for pair-matching, one that's also apparently appealing to the female users who've flocked to both SugarDaddie.com and its main competitor, SeekingArrangement.com, which claims a female-male ratio of 10 to one.

London-based journalist Helen Croydon frequented both sites for three years. Her memoir, Sugar Daddy Diaries, charts the now-35-year-old's experiences (and purchases) in a world that often discomfortingly resembles the one inhabited by high-priced escorts. The difference? "Genuine rapture and affection," the author insists.

Croydon – whose username was "Perrier Jouet," a champagne brand – spoke with The Globe and Mail about why men will pay to flaunt their provider status, and how women rationalize playing along.

How do you define a "sugar daddy?"

When I set out, what I had in mind was a sophisticated lover, someone older and more emotionally articulate who I could see a few times a month with no heavy commitment, who would take me to some nice places, have some stimulating conversation. After experiencing these sites, it became someone who also perhaps offers financial support, be it gifts or, in more controversial cases, a cash allowance.

What does that make the women? "Sugar babies?"

I hate that term. The culture on the websites is that they're "sugar babes." It's demeaning to infantilize the women; the whole idea of wanting to date someone older is the sophistication.

"Sugar" implies both sex and money.

It's always a given that the man pays the way, although on SugarDaddie.com it seemed evenly split between those in it to be paid and those just in it for fun and adventure. When it came to Seeking Arrangement, more women were doing it for some sort of allowance.

Everyone I met on these sites was like me: a little bit nervous and guilty about it. What the men would do was suggest alternatives [to cash]: One of my early sugar daddies gave me a loaded store card; another one took me shopping. It's what a lot of men and women use to justify to themselves that it's a few steps removed from all-out prostitution. There's an awkward form of negotiation with both parties knowing that it doesn't fit in with conventional morals, yet it does fit within their own moral code, because everything is consensual and neither side wants a committed relationship, presumably.

How do allowances work?

In one relationship, we didn't negotiate anything. I wanted to spend time with him because I liked him, but it was implied by the nature of the website that there would be something at the end of it. He gave me an envelope of cash after every time. Later, when money became the motivation, I knew I had to stop.

What about shopping trips?

What kind of people frequent the sites?

The women are presumed to be attractive, young and non-demanding, and the men are presumed to have success, confidence and maturity. The men are looking for "low-maintenance" girlfriends they can have some continuity with. I avoided the ones who made it obvious they were married. Some men have delusions that they're more wealthy than they really are, and have the fantasy of entertaining a mistress.

Some of the women have their own careers, but also a risqué side: They don't want commitment but like the idea of an older, sophisticated man. There are others who think it's a good way of getting help with their rent, and [there are] stories of students using it to get their school fees paid. If a woman's prime motivation is to fund her lifestyle, she's going to resent the men, especially if the men are genuinely not her type.

Why would women with earning power go in for such an arrangement?

In many ways it's the women getting the best out of the men on these sites. The woman keeps her freedom while the man believes that she really likes him. They're paying an awful lot for something they could probably get on a normal dating site. It's not "empowering" for women, but it does have more potential for women to take advantage of men rather than the other way around.

It's not that the lack of parity was a turn-on. I was into my career and I didn't want the claws of a full-time relationship to interfere. It kept me free.

"How sexy to feel like cherished, high quality goods," you wrote. Really?

There's a bit of an ego tick when you're on a dating site and not only is your date attracted to you but he's also willing to splash out on you.

Paying half was a somewhat horrifying prospect when you dated men your own age offline.

I'm ready for the commitment and mutual respect. But when you want short-term fun, you think, 'Why I am going to pay for this when there are loads of men offering me gifts?'

Did you ever calculate your earnings?

I never really tried to count it. I'd just prefer to close my eyes and not think about it.

You had sex with men for money, but you keep clarifying your genuine attraction for them. Why?

It's key to the distinction between sugar-daddy dating and prostitution. For me the motivation was a genuine thirst for dating, and attraction was key. When your motivation is money, it gets closer to prostitution.

Can you spot other sugar babies?

Whenever I go to a nice bar or restaurant and see a very glamourous, slightly overdressed girl with an older guy, I wonder what the deal is there.

You described hotel staff mistaking you for an escort.

I just swallowed my pride: I wasn't there as an escort, I was there meeting someone off an Internet dating site. The dynamic visible between us would be slightly different than a call girl and a guy.

And yet there were turn-offs: Sometimes your inbox resembled a "customer services centre."

They became arrogant because they're paying the way, well beyond the conventional dating world. They feel that qualifies them automatically to expect a date.

It's been three years since I came off those sugar daddy sites. A year ago I met someone with whom I'm in a more conventional relationship. I'm still attracted to older men – he's older. He knew about the book before we got together and I really appreciate how philosophical he is about it. He'd also been through a bit of a wild, non-commital phase.

You say sugar-daddy dating felt no more morally questionable than the usual 20-something casual sex.

We go through stages in life when we're adventurous. Nearly every woman I know has gone through a "loose" period. I was a late developer and my awakening hit in my late 20s. Somehow it's okay to do that in your teens and early 20s but as you're approaching your 30s you're expected to settle down. We're so dictatorial about how we need to live out our relationships. 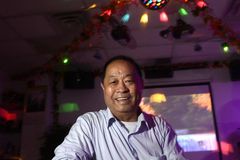 Dirty work: What women think about the division of labour
June 2, 2013