I started doing my taxes this week and, for the second April in a row, shed a little tear that I'm no longer a joint filer. It wasn't anything overly sentimental like loss or loneliness that evoked my sorrow. No, it's just that as I stared at the number on line 101 - "employment income" - I missed having a sugar mama.

Well, I should say, sometimes-sugar mama. At least half the years I spent with my ex, I carried more of the financial burden. But when I was taking time off to write or making little on contract work, it was excellent to have her steady salary supporting my ahhrt.

It's funny, though - even while we openly prided ourselves on fairness, on swapping the breadwinner role like two equals on a see-saw - when it was my turn to be supported, I sometimes felt guilty, as if I was somehow betraying that man part of me. No, not that part, just the place in my brain that still holds the idea that to be a man means to be the provider.

A friend of mine in a similar situation has become a bit of a legend in our circle. "I'm moving to Paris with my wife," Andrew, a 28-year-old writer, told me a few years back. "She got a job there. And I'm going to work on my novel." All the guys who heard the story were envious, of course, but thinking about it now, I wondered how he was finding the role of being a kept man.

"I'm occasionally aware of the fact that she makes more than me, but it's not a problem in a gendered sense," he told me. "I think any relationship between two people who make different money can be awkward." He did get some teasing, however, mostly from his wife's male investment banking colleagues. One of them used Andrew as a punchline in a year-end speech, calling him his wife's "trophy husband."

Among his friends though, he didn't get much ribbing. In fact, he says of the eight guys he lived with in university, three are now married to women who earn more than they do. One friend of his e-mailed him recently, proudly proclaiming that he was "pulling an Andrew" and moving to New York with his lawyer girlfriend.

The fact is, the female breadwinner demographic is increasing to the extent that it will soon be a cliché. A recent U.S. report showed that in 2007, women were the primary earners in 22 per cent of families, up from 4 per cent in 1970. In Canada, the trend has been roughly the same, and even hit a high of 29 per cent in 2003.

Andrea Doucet, a professor of sociology at Carleton University in Ottawa has been researching the trend for more than 20 years, most recently for Bread and Roses - and the Kitchen Sink, an online forum that will become a book in the near future. Dr. Doucet has followed hundreds of families - most of whom have kids as part of the equation - and she has seen some men struggle with their identity as stay-at-home dads and househusbands, mostly due to outside pressure.

"The man has to deal with what his father will think of him, what his friends think, his father-in-law, and the community. They ask him, 'What are you doing all day?' Whereas nobody asks a woman that. They assume she's taking care of the house, her family, or working in the community."

Dr. Doucet says these men often find ways to prove to themselves they are still manly. "When men are at home, they seem to need to engage in some activity that puts their masculinity on view," she said. "They'll renovate the house or get involved in some extreme sport. If they're working in the school, they'll build sets."

But despite the insecurities these groundbreaking men suffer from, Dr. Doucet says the next generations will benefit from them sharing the childcare and housework. "I've seen enormous changes over the 20 years I've been examining this," she said. "Visiting families eight or nine years later, I talk to the kids and they have very sophisticated ideas of what they can do as a person, because they've seen both parents work and care. They don't feel bound by their gender, gender restrictions and traditional gender roles."

Another guy I talked to, a 36-year-old freelance writer with two kids, seemed to already have fully embraced his dual role. "I did three loads of laundry today," he told me cheerfully when I asked how he compensates for his wife working longer hours and making more money. He says his flexible schedule allows him to buy groceries, do stuff around the house, and take the kids to and from daycare, all of which allows for more free time in the evenings and on weekends. "It's just part of my job," he said.

In the end, I've decided not to be troubled ever again if I should find myself another sugar mama, or sometimes-sugar mama. What is troubling me now, however, is that women are still in this day and age making less than men on average for doing the same work. We all need to do what we can to change this. If you're ever in need of a sugar mama, you'll be happy you did.Micah Toub's memoir, Growing Up Jung: Coming of Age as the Son of Two Shrinks, will be published in the fall.

The newbie's guide to the girlfriend's family cottage
May 13, 2010 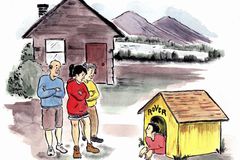 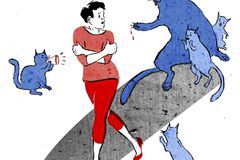 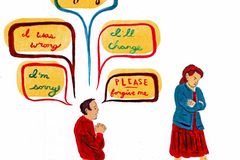