"Being married was like having a dog who talked. No one ever told me that."

I felt sorry for the husband when I read that line by Julie Klam, an American writer who has made her name as a bestselling dog memoirist with You Had Me At Woof: How Dogs Taught Me The Secrets of Happiness and her latest effort, Love at First Bark: How Saving a Dog Can Sometimes Help You Save Yourself.

The nice thing about husbands is that they can not only make you happy (if you have a good one) and ask you to rub their furry tummies and follow you loyally down the aisles of Wal-Mart, but they can also, thank goodness, tell you when you're barking mad.

They don't just talk. They think. Dogs don't know when you're being a narcissistic idiot. They'll still wag their tails when you come in the room. They'll hang on your every gesture. They don't know you're in some weird and needy space, desperate for someone's dependence. They aren't aware when they've become baby surrogates. They can't stop you in your thinking and say, "Listen, darling, I'm not an honorary human no matter how much you like to think I am. Just because we all know what d-o-g spelled backward says, that is not a 'sign' of my spiritual wisdom. I am a dog. Get it? I pee on fire hydrants, not in toilets. I eat garbage. I sniff crotches. I am unaware of my own flatulence."

What, you haven't noticed that we're in an era of dogmania? You thought those "pawtisseries" – specialty bakeries for pets – and all the expensive dog accessories were just adorable manifestations of people's disposable income? Maybe they are at some level. But at what point does the cultural obsession with all things canine become what New York magazine writer, John Homans, called an "interspecial neurotic interchange"?

(Cesar Milan, the self-proclaimed Dog Whisperer, once told me that dogs are not only a valuable guide to happiness, love and effective prayer, they can help solve economic problems and bring about world peace.)

Of course, dogs have long held a special place in the human heart. Some of the world's greatest writers – Rudyard Kipling, Robert Frost – have penned enough pet paeans to attest to that. And it's true that many dog writers describe their canine obsession in a lovingly goofy manner, as though they're aware it's all a bit over-the-top, silly as a golden retriever belly-flopping into a lake. And they don't care. The world is complex and often unkind, so what's wrong with celebrating something that is a simple source of joy?

Cannily – caninely? – many dog lovers try to keep themselves on a leash, however long. They sneak in a mention of the importance of human family members, too, lest they come alarmingly close to Leona Helmsley-esque misanthropy. (Remember her, The Queen of Mean who was tyrannical to her human minions but left her dog, Trouble, a $12-million trust fund?)

When I caught up with Ms. Klam by phone in California, where she was on book tour, I wasn't sure how to react when she told me that some of the greatest lessons about happiness she has learned from dogs. "One is the way they let go of something. They don't hold a grudge," she said, adding that she feels dogs are "higher beings," which is why they only live a short time. "They look for the good in things. They look for the treats. They look to be close with you."

I didn't yank her chain. I held my bark.

And when I got off the phone, I called an expert.

James Serpell is a professor of animal welfare and head of the Center for the Interaction of Animals and Society at the University of Pennsylvania. Having studied animal-human relationships for 30 years, he sees dogs as "non-human social support providers."

His take? It's all about the changes in human society. "Prior to rapid urbanization, people had a rural attitude to animals as practical and utilitarian," he explains. "But the move to cities was a distancing mechanism and those attitudes faded away, opening the door to an anthropomorphizing view of animals."

Then there's the unravelling of tight-knit human relationships: divorce, low birth rates, isolation. "Animals have stepped into the breach and filled the gap." He points to studies showing a dog's companionship – and that soulful gaze – increases the owner's oxytocin level, lowers stress and promotes healing.

Was I being a killjoy to wonder if we're headed for the dystopia described in P. D. James's Children of Men, a future world in which no children have been born for 25 years and divorcing couples battle for custody of the cats? Which is not to say I'm anti-pet. I have a history of beloved dogs, stray cats and hamsters. It's just that I have always been clear about who is leading whom.

"There are so many things in people's lives they can't control and they can't make better, and here's this thing you can do," Ms. Klam explained about her work in animal rescue, noting that despite the economic difficulty in the United States, people are still lavishing their dogs with accoutrements and treats. "You can make a difference in this animal's life, and there are huge [emotional]rewards for that."

She volunteered that she sees the parallel to modern parenting. "We're conscious about what dogs are feeling in the same way we think about kids, as opposed to the be-seen-and-not-heard generation of parents."

Then she ended the conversation by telling me a story of her aunt who saw a spider in her apartment.

"She didn't kill it. She couldn't bring herself to."

She put it out on the balcony.

But then she couldn't sleep. "She was worried about whether it was an outdoor spider."

Maybe she could have knitted it a little sweater or something, she suggested. That might have made her feel happy, useful, caring, a fully conscious human.

She was kidding. She was being self-derogatory. She was jerking my chain. 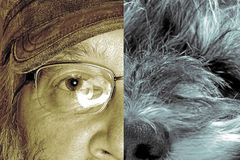 Train your man like your dog, books recommend
March 17, 2011 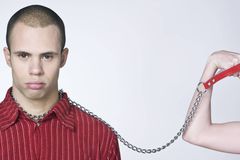