An Ottawa journalist drew the ire of the Internet when he used the word "tryst" to describe the sexual abuse of a 13-year-old pupil by her 29-year-old teacher. Phillip Nolan, a music teacher who taught Grade 7 and Grade 8 students and played drums in a band with former prime minister Stephen Harper, was sentenced to two years in prison on Monday after pleading guilty to two counts of sexual interference with a former pupil.

Critics took Spears to task for that choice of word yesterday. Spears defended himself, arguing that Nolan had created the illusion of a relationship. As for his use of the word "tryst," Spears wrote: "That's EXACTLY what it was, subjectively, while it was happening."

Judge Ann Alder of the Ontario Court saw it in somewhat clearer terms, saying of Nolan, "He befriended the victim, he manipulated a 13-year-old child who, as evidenced by her own letters, believed that this was a relationship when in reality it was simply sexual child abuse."

While 2015 was by many accounts a year of progress for women, there remains a reluctance to call sexual abuse what it is.

Across Twitter, critics are calling out those who routinely opt for language that minimizes what took place instead of using legal terminology when they are describing sexual assault. Language, they point out, has power: Both victims and perpetrators are reading and words such as "tryst" glaze over crimes while hinting that victims are partly to blame.

As they call out tone-deaf tweets and headlines, critics insist it's not about politically correct language policing but about using the actual, precise words when you're talking about sexual assault. In response to Spears' "tryst" tweet, the Toronto group Femifesto used the hashtag #usetherightwords to remind journalists to use more accurate terms in their reporting on rape culture and sexual violence.

Using this word suggests the victim is culpable. In effect, it's the same language that perpetrators use to groom their young victims into believing they are involved in relationships in which they are fully complicit. "Tryst is not a word that should be anywhere near sexual assault cases in the news," says Lucia Lorenzi, an anti-violence activist in Vancouver. "It has a lot of potential to confuse people who might be vulnerable. … It could send the wrong message to a lot of victims that could be in that situation."

"This needs to go. It's either sex, or sexual assault," says Julie Lalonde, Ottawa founder of Hollaback, an organization that fights street harassment. Lalonde, who routinely "fixes" headlines that are out of touch by drawing attention to them, says the term "non-consensual sex" is not used in legal circles, public education or in advocacy work with victims of sexual violence. "It's a means of softening what's actually going on," she says. "The language really does matter because it matters that we actively condemn this stuff as much as we can."

If you're talking about a consensual workplace affair, this term works, but it certainly shouldn't be used as shorthand or a catch-all for sexual assault. "Sexual misconduct is such a gross euphemism. It's used to lessen the gravity of what we're talking about," Lalonde says. "Who does this benefit? Certainly not the victim."

The salacious term has been widely used in relation to sexual assault allegations against Bill Cosby and Jian Ghomeshi. "Scandal suggests something has scandalized a community. Often, 'scandal' also gets used to suggest that some kind of harm has been done against perpetrators and their reputations," Lorenzi says. "We are continuing to talk around the issues instead of using words like 'abuse.'"

Victims' advocates take issue with the strange reluctance among some to drop "alleged" once perpetrators have been convicted and sentenced for their crimes. Lalonde also takes issue with using the words "alleged sexual assault" when no perpetrator has been identified. The word unnecessarily protects an as-of-yet-unidentified perpetrator, while calling into question the veracity of the victim's story: "You're throwing the victim under the bus," Lalonde says.

What all of these terms have in common is a minimizing of sexual abuse and violence.

"It's not about one tweet. We're constantly [casting] doubt on the credibility of victims," Lalonde says. "As a culture, we're deeply uncomfortable talking about all forms of sex and so we couch everything in euphemism. When you're talking about acts of sexual violence, people are even more uncomfortable going there and acknowledging that it's something that happens in our community. We've made so much progress in the last year but we clearly have a long way to go when we can't even name something for what it is." 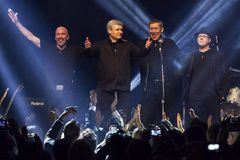 Drummer in Harper’s rock band charged with sexual assault on a minor
February 6, 2014