When I am mentally machete-hacking through images of Hollywood celebrities in magazines or online, I am always grateful to come across Tilda Swinton. She is the rare actress who wears clothes as if she were present when they were chosen. Her celebrity peers often appear incidentally Saran Wrapped, like European luggage, but Swinton commands her sculptural Haider Ackermann suits and Viktor & Rolf gowns, every audacious look topped by a swirl of soft-serve hair. She also happens to be over 50; if you can focus on her long enough without having to turn away because she's so damn cool, you'll see lines around the eyes that prove it.

In the past few weeks, such lines have, oddly, been easier to find in pop culture as "older" (a phrase that suddenly applies to anyone over 35) female celebrities have received a flurry of attention. Cate Blanchett – a whopping 42 – appeared on the cover of Intelligent Life magazine without the benefit of Photoshop. She looked like Cate Blanchett, which is to say gorgeous, and with a few smile lines around her mouth. In the field of balloon-skinned celebrities, the tiniest suggestion of human flaw passes for radical, as even the magazine's editor noted: "It's a curious sign of the times that this has become something to shout about."

Jamie Lee Curtis, 53, recently published a column on the Huffington Post declaring herself "anti-anti-aging." She condemned this futile war against time and its armoury of injections and surgeries. "We are in the chain of our ancestors, like it or not," Curtis wrote. "These are truths to be celebrated and in other countries they are. The term older and wiser is actually in play everywhere but here."

Meanwhile, a breathless Daily Mail profile titled "Wrinkly can be ravishing" paid homage to 66-year-old Charlotte Rampling. The actress claims to eschew plasticizing, explaining the decision as largely pragmatic: "Don't change your face and you can get really interesting parts − not just granny parts; you can get sexy parts, too."

The question of career is what makes the strange masks atop the faces of older actors such as Jessica Lange and Sophia Loren so troubling (in a recent Vanity Fair photo spread, Loren's staggering beauty has been sacrificed for something closer to Siegfried & Roy). For many women, there's ambiguity about cosmetic surgery's place on the continuum of vanity: What about choice? Why is tooth whitener or hair dye okay, but not Restylane?

The one group who need not equivocate is actors because, more than any of us, actors absolutely require a range of expression. The face is the actor's great instrument and losing it is akin to removing a singer's larynx. Maybe the end of the moving, human face is an acknowledgment of the end of acting: the final stop in the evolution of entertainment from craft to celebrity.

Still, I worry: Who will be left to play the grown-up parts? Perhaps the only stories to be told will be set on high-school campuses, far from the faculty lounge.

To be fair, a cadre of older actresses who have either gone light on physical interference or sidestepped it altogether is cornering the market on characters over 40: Kristin Scott Thomas, Meryl Streep, Judi Dench. But this doesn't feel like a victory. They are the most revered performers, permitted to step outside industry norms that lesser-known actresses are compelled to follow. And even then, too often the focus is not on what they've accomplished but that they've somehow managed to remain hot while doing it: Witness Susan Sarandon and Helen Mirren getting the "I'd tap that" treatment every time they visit a talk show. It's not that older actresses aren't sexy, but why is their appeal, or their worth, only understood through the lens of sexy?

Maybe we don't know what to make of older women because we don't see them much. One U.S. study showed that fewer than 5 per cent of prime-time characters were over 65 (one can assume the 5 per cent is evenly split between rapping grannies and horn-dogging grandpas). When they are the focus of news media, the elderly are often pension-sucking parasites rocking the economy or rubes, robbed and swindled. Betty Friedan called this version of old age "the second childhood" and wrote that representations of old age often hinge on "mockery and denial of our adult personhood and the years of risk, pain, joy and learning that got us there, a denigration of our grown-up selves."

But the grown-up self calls for erasure, even among the young: According to the American Society of Plastic Surgeons, teen-cosmetic surgeries doubled from 2002 to 2010. These days, the most unyielding celebrity faces belong to actresses like Megan Fox or Lindsay Lohan, not yet 30, yet frozen, perhaps taking a lesson from their elders. 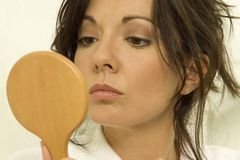 Manly makeovers: Why more men are turning to Botox
January 14, 2012 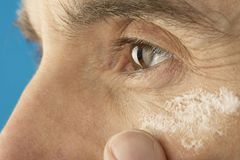