Peppers make me feel summery and happy, and the thing I like most about them is their wonderful sweetness. From the jarred peppers that have been burnt, blistered, peeled and preserved – therefore offering loads of convenience – to those that are raw, fresh, pickled, smoked, dried and ground, the myriad possibilities and varieties are phenomenal.

This week, I've chosen the larger, milder varieties that are more commonly found in shops and supermarkets, and which have been truly embraced into many aspects of regional Spanish cooking. The Spaniards definitely have a way with peppers, and I love how they seem to pop up in all sorts of pintxos, especially in the country's tapas bars. Layered into mini grilled cheese sandwiches, paired with simply grilled seafood, stuffed with anchovies and olives or charred and chopped up with loads of other veggies for escalivada, there are so many ways to embrace them.

This week, I've shown you the ultimate way to remove pepper skins – you can do it on a barbecue or under the grill, or if you have neither of these, hold the peppers with a pair of tongs directly over a flame on the stove. Blister and char them until the skins are black, then place the peppers in a bowl with plastic wrap on top and allow to sit and steam for 15 minutes. The skins will simply peel off and the flesh will be soft, sweet and gloriously smoky. Tossed in a herby dressing, escalivada is a humble, brilliant dish to be eaten on its own, with grilled or barbecued fish or meat, or as part of a big spread. Enjoy!

Preheat your grill or barbecue to high.

Smash the head of garlic and separate the cloves.

If using the grill, place the garlic and all the vegetables in a large roasting tray – there’s no need to prep them first – and scorch for 15 to 20 minutes, or until blackened and tender. If cooking on a barbecue, place the garlic and veg directly on the grill. You will need to keep turning them as they cook to ensure their skins are evenly blistered and blackened all over – this will help you to peel them off afterwards. The tomatoes and peppers will take less time than the others, so keep an eye on them and carefully remove them when they’re ready.

Pop everything into a couple of large mixing bowls, cover with plastic wrap and leave for 10 to 15 minutes to allow them to cool and steam.

Peel the tomatoes and cut the flesh away from the core; remove the seeds, then squeeze the skins and core through a sieve over a mixing bowl to catch the juice. Carefully peel the peppers and remove the seeds and stalks, adding any juice to the mixing bowl.

Peel the aubergines. Carefully peel the onions and discard the skin, adding any juice to the mixing bowl. Pop the garlic out of its skin into the bowl of juices, discarding the skin, then gently stir to combine.

Cut the tomato flesh into chunks.

Tear the peppers and onions into strips.

Pull the aubergine flesh away from the seeds, then cut into strips. Lay all the veg on a large platter.

To make the dressing, remove the bay stalks, then place in a pestle and mortar.

Add a good pinch of rock salt and bash until you get a bright green dust.

Pick the parsley leaves and chop the stalks, then add to the mortar with the oregano. Bash again, muddle in the oil and sherry vinegar, then season with a good pinch of black pepper.

Pour the garlicky vegetable juices on the vegetables and finish with the herby dressing. 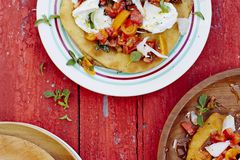 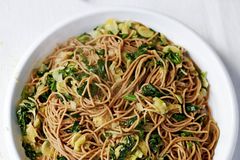 Argentine-Style Fish with Caponata and Chimichurri
May 16, 2018 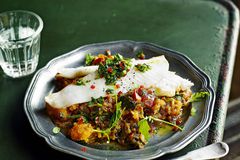