Conventional wisdom suggests that you can win a person's heart through their stomach. How else to explain why amorous couples at this time of year express their devotion with chocolate truffles, candy hearts and intimate candlelit dinners?

As any chef or enthusiastic home cook will tell you, feeding others is an expression of one's care. Show me an individual who is not both emotionally touched and gastronomically sated after a thoughtfully prepared meal, and I will show you a robot.

But why are food and love so inextricably linked?

Maryanne Fisher, an associate professor of psychology at Saint Mary's University in Halifax, believes part of the answer may be due to what is known as "inconvenience display." Just as the distance someone is willing to travel to see you reflects their level of interest in you, so too does all the grocery shopping, menu planning and slaving over a stove that goes into making you a meal, she explains. Moreover, she says, this kind of effort is considered an "honest signal," since it is hard to fake.

But even the culinarily challenged go to great lengths to impress their sweethearts with food, regardless of whether it means struggling to make it themselves or simply paying for it. Fisher says her research has shown that the more someone likes another person, the more he or she is willing to spend money on a meal for them.

Other researchers have shown that love can actually be tasted. A study last year from the University of Maryland found that benevolence improves people's perceptions of flavour, offering an explanation for why cookies do, in fact, taste better when Grandma makes them than, say, if you buy them from a bakery. Candy was tastier and sweeter to the study's participants who were given a package with a note saying, "I picked this just for you. Hope it makes you happy," compared with those whose notes read, "Whatever. I just don't care. I just picked it randomly."

Yet the relationship between love and food can be a tricky one. Love – and the lack of it – can affect one's appetite in strange ways.

Lonely hearts may run the risk of packing on pounds from "emotional eating," as they seek indulgent, mood-enhancing foods such as chocolate, Fisher says.

On the other hand, people who are lovestruck can lose their sense of hunger, especially when they are caught up in the excitement of a new relationship. Helen Fisher (no relation to Maryanne), a professor of anthropology at Rutgers University in New Jersey and author of the book Why Him? Why Her?: Finding Real Love by Understanding Your Personality Type, explains that romantic love drives up levels of the neurotransmitter dopamine in the brain. Dopamine is a natural stimulant that can suppress appetite, she says.

Interestingly, a breakup can also cause dopamine levels to soar, she adds. "You become frantic, and dopamine goes up to give you that energy and motivation and focus to win the person back. And that's going to reduce the appetite."

Heartbreak, she explains, happens in stages, which may account for why it can make people either quit eating or binge. After an initial protest stage, when appetite is stifled, she says, people tend to slump into despair, or a resignation stage, which causes them to turn to food for comfort.

"That's when you'll probably turn to cake, cookies, pasta," she says, noting that such comfort foods drive up levels of the hormone serotonin, which suppresses the dopamine system, making the individual sleepy and calm.

In other words, comfort foods may provide some relief for grieving hearts. "They're actually self-medicating," she says. 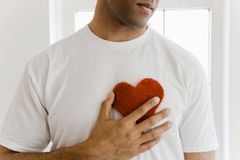 Wear your heart on your cheese plate with Neufchâtel
February 12, 2013 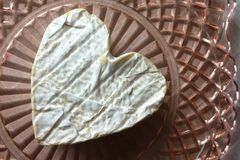 Does texting for a date send the wrong message?
January 31, 2013