I was led to believe there would be champagne.

So were my bridesmaids, who dipped out of work early to join my mother and me on what seemed like a fun trip: trying on a bunch of big lacy dresses in search of one smaller, perhaps partially lacy dress I could wear to traipse across my uncle's lawn toward my fiancé later this year.

My bridal party's first stop was Kleinfeld, the expensive wedding dress mecca made famous by TLC's Say Yes to the Dress. "Actually," a bright-eyed salesman at the Hudson's Bay store said, "This location is not affiliated with the TV show, so we say 'I do' to the dress."

Hundreds of gauzy gowns hang in the impeccably bright, white-on-white-on-rhinestones interior that's elegantly punctuated with delicate floral arrangements. The staff and the floor and the dresses all seem to glitter slightly. Or maybe it's just the reflection from the jewel nook. Also, there is a jewel nook.

I was a Problem Bride almost immediately. "I'm getting married in June," I told the petite woman behind the counter. "June … 2015?" she asked, confused. Her face fell further when I told her my budget was the lowest option on the form: $1,000 to $1,500. "With your budget and a time frame like that there's not much we can do, but we can try!"

This was the first of many lessons that wedding dress shopping is not like regular shopping. To start, brides operate on a different schedule. They make fitting appointments a year before the Big Day, leaving six months for alterations. I was working with four months, and almost every shop I visited said this would involve rush fees of $500 or more. Then, of course, there's the pressure: Everything about the experience of buying a wedding dress exists to remind you that this single-use, incredibly expensive signifier of your non-existent virginal purity is The Most Important Piece of Clothing you will ever own, and that this is The Biggest Day of Your Life.

And it is a big day. Financially, at least. According to a Weddingbells magazine survey of recent brides, the average cost of a wedding in Canada is $31,685. The average dress costs almost $2,000. Standing in a store seriously considering a $6,000 gown through which my nipples were clearly visible, I caught a glimpse of the slippery slope that is the wedding industry. After buying the Perfect Dress™ I'd need the Perfect Venue. Once that was done, the Perfect Flowers. And so on through to the Perfect Invitations, Perfect Canapés, Perfect Tier Of Cupcakes Because That's What's Replacing Cakes Right Now.

I was led into a massive private dressing room and told to take everything off. "I see it every day," said my kind blazered helper, wrestling me into a strapless lace number as I clutched fruitlessly at my modesty. I was then paraded out to my friends and family and told to stand, sculpture-like, on a giant plinth in front of many mirrors. All the non-brides below stared up with diplomatic faces, judging quietly.

Because it should be perfect. You deserve this. You're not a woman any more. You're a bride. You're going to look at those photos forever.

This is the paradox of wedding dress shopping: You're told everything should be exactly as the bride, reigning queen of the hour, wants it. You're pushed into a blinding, jewel-encrusted spotlight, then gently bullied toward choices you would never make when not half-engulfed in organza. You're told this dress should make you feel the most beautiful you've ever felt, then clamped – literally clamped, with industrial pincer things – into a sample dress that was, in my case, at least two full sizes too small. "Beautiful," the salespeople will tell you. "Special."

Everyone at every shop said these words over and over. At one, when it looked like they wouldn't make the sale, a second shop assistant appeared out of nowhere, repeating the words "big day," "dream dress" and "you deserve to look how you want to look" in different combinations at an almost frantic pace. It was a bizarre combination of deference and pushiness that fit worse than the lightly embellished, mermaid-hem, sample-size gown the sales team had ripped down the centre to make fit because "this really feels like the one."

I found something of a reprieve at Lowon Pope, a Toronto wedding boutique notable for its bias-cut gowns, a throwback to the 1930s predating the vintage-inspired wedding trend currently wreaking havoc on Pinterest boards worldwide. Lana Lowon and her husband, Jim Pope, have been designing and making wedding dresses for 23 years. Theirs was the only store I went to that had sample dresses that fit – and another rack of dresses several sizes larger.

"I like curves," Lowon said. "I'm a bit controversial but I don't think those big, strapless gowns really work. There's too much stuff on them, they're too heavy. And if they're not fitted perfectly you have to pull them up all night long."

An advocate of "simple, fluid elegance," Lowon said wedding dress shopping can spiral out of control when women try to please too many people at once. "They want a dress but they want more than a dress, too. Brides worry about everyone – their mother, the groom's mother, the groom. They want everyone to be happy but they need to think about themselves first, how they feel in a dress."

It's good advice. I had hoped to spend $700 on something simple, and ended up legitimately trying to arrange a rush shipping on the $6,000 nipple displayer.

Wedding World shopping engulfs you very quickly. Some of its rules are stated outright (no photos of the dresses, Spanx suggested) and some are quieter, unvoiced expectations (no bad attitudes, flexible budgets). Some are just things you are supposed to know: For instance, that "bridal sizing" runs two to three sizes smaller than regular clothing. "You know, when it's in your size, obviously, it will … fit," a clerk at one boutique suggested limply. I tried on eight dresses, each fitting less like a clothing item and more like a luxury bib, the bustline up by my neck, the sleeves bunched around my elbows.

All of this is to say that I, an adult woman, shed tears of frustration while wearing half a wedding dress before a wall of mirrors.

Tired of it all, I wandered into Aritzia and found my Perfect Dress™ – a mid-length white linen number – for $145.

Monica Heisey's debut book, I Can't Believe It's Not Better, will be published May 13.

The year’s top wedding trends: Barns, bow ties and wildflowers are in. Cupcakes, mason jars and tuxes are out
April 30, 2015
What stylish brides will be wearing this year: Something old …
January 23, 2015
Smartphones at weddings: Should couples ask guests to document their big day on social media?
August 21, 2014 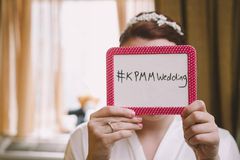