Imagine that you are 14, and you get to wear high heels wrapped in glitter and pink bows and hang out with a world-famous photographer. You are so lucky! Everyone thinks you're pretty! Best day ever! But you're 14, so, five minutes later, you just don't know any more. You hate everybody. You don't want to be looked at. Too late - you're on a billboard.

The intense mental and physical fluctuations of the teen girl don't seem suited to the type of public scrutiny inherent in a global fashion campaign. And yet, these days, style is a child's game. Elle Fanning, younger sister of spinster Dakota and a lead in the recent Sofia Coppola film Somewhere, stars in a new campaign for Marc by Marc Jacobs. She's 13. Willow Smith, 10-year-old daughter of Will Smith and Jada Pinkett, has her own distinct style - let's call it "robo rainbow" - and for that was named to The Guardian's alternative Best Dressed List of 2010.

For girls and women, this is bad news.

Of course the modeling industry has long been a child's game. Milla Jovovich was in magazines at 11. Brooke Shields and her Calvin Klein jean ads became a worldwide sensation in 1980, when Shields was 14. I once interviewed a 14-year-old model, a smart ninth-grader with a penchant for fantasy novels, who had just starred in a campaign for wedding gowns.

Makeup can help an adolescent pass for a bride, but one suspects the baby muse trend is not really about the face (though that elastic skin helps). The Daily Beast wrote of Fanning: "Though she's still missing five teeth, Elle has shot up to 5-foot-6, and dresses look good on her ballet-dancer frame." In this case, ballet-dancer is code for "pre-pubescent." Most designer clothes really look their most fabulous hanging off an empty hanger; a skinny 13-year-old is the next best thing. The rise of the Girl It Girl confirms what most women have often suspected: the ideal body for a grown woman's outfit is a girl's. I may be the more likely buyer for a $10,000 dress (well, in my Mark-Ruffalo-riding-a-unicorn-filled dreams) than a teenager, but I'm not the body for it.

Steinfeld and Fanning are often described as "fresh," which is not a woman's word. Both are known for age-appropriate dressing - no cleavage allowed. Steinfeld wore a striped Prada tube dress to the SAG Awards last year, and her stylist added straps. In one Miu Miu photo, she's eating pizza. So the pictures appear to celebrate (and package and sell) girlishness. Fanning and Steinfeld also seem like an alternative to the Disney princess star, who, when the clock strikes midnight on her 15th birthday, puts down the mouse ears and heads to Coyote Ugly. Miu Miu and Marc Jacobs have hired good girls, academically inclined and serious, Oscar-oriented actresses. The fashion houses that back them are betting that their bracelets will be haute couture, not ankle.

Yet, in the Miu Miu press material, Steinfeld's first shoot is described as representing "an already complex view of femininity illustrated by this sophisticated and elegant collection." "Sophisticated" and "elegant" aren't usually descriptors for a young teenager. The clothes may be modest, but the bright red lips and a few pouty poses bring to mind Brooke Shields in Pretty Baby. So what Steinfeld is selling is the age-old cocktail of innocence and sex. In that mixed message lies the confusion of modern girlhood: Be a good girl - but naughty!

In the book Cinderella Ate My Daughter, Peggy Orenstein cites studies that show a negative effect when young girls dress and behave provocatively before they are able to make sense of their own sexuality: "They learn how to act desirable but not how to desire, undermining rather than promoting healthy sexuality."

I'd never deny that girls are sexual, and that playing and experimenting with that new sexuality is a huge part of the transition into adulthood. But it takes a lot of privacy to grow up. Mistakes will be made. Hips will emerge, and acne. And beauty, too. But the precedent for making it through healthy and unscathed while under the spotlight isn't good; there are more Lindsay Lohans and Michael Jacksons out there than Jodie Fosters. A child model - or a child muse - becomes self-abnegating; she exists for the pleasure of others. She is inherently disposable - and at the exact moment she most needs to feel most of value. Sell me a grown woman's sexuality, and a grown woman's evening gown. Leave those kids alone.

Why has body-hair removal shifted from a choice to a necessity for women?
July 2, 2011
Why are passionate women always compared to cats? Meow!
June 18, 2011
Why women should just say no to shorts
June 11, 2011 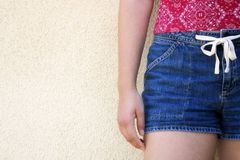