Trends in contemporary popular fiction can be as unpredictable as fashion fads. Nobody expected, for instance, that the gloomy, bespectacled Harry Potter would help resuscitate the ailing book industry any more than Lady Gaga's bizarre looks would help motivate retail sales. Yet today's newest publishing trend is as out in left field as Potter and Gaga once were.

Over the past year, man-on-man romantic fiction - books featuring two male protagonists engaged in a sexual or emotional relationship with each other - has taken a significant bite out of one of publishing's biggest markets. Amazon's Kindle has had such success with the genre that the e-book site has tripled its "m/m" stock since January, 2010. Even Harlequin - the most profitable and old-fashioned romance fiction house in the world - has recently started to publish same-sex love stories via the company's digital imprint, Carina Press. What's most surprising, though, are the types of readers the books have hooked: Straight, married women are among the genre's top fans. That may be because the authors, such as Iowa's Heidi Cullinan, a 37-year-old suburban mother of two, are frequently heterosexual females, too. Cullinan has penned such recent works as the popular gay romance Double Blind and the homoerotic fantasy Miles and The Magic Flute.

"One of the reasons why more women are ravenous for these books is that they want to read something about gay men that doesn't involve them suffering from [HIV/AIDS] committing suicide or getting bullied. I know I was," Cullinan says, adding that mainstream TV shows such as Queer As Folk and True Blood have helped heterosexuals embrace guy-on-guy fantasies as "normal." "When I saw Brokeback Mountain [in 2005] my husband had to drive me away from the theatre for 45 minutes while I yelled out the car window because I didn't like the [tragic]ending," says Cullinan, who also devotes her time to LGBT advocacy in her hometown. "I was really tired of dead gay men in films and books or campy guys who never had sex, so I wanted to fix the problem and show that gay men were having great sex and had complicated, interesting relationships that people would love to know about."

Cullinan's hunch was right. Her first book, last year's Special Delivery, not only sold well enough to help her pay off a chunk of her student loan, but swiftly led to commissions to turn out a pair of sequels. Special Delivery focuses on a handsome, Iowa-based nurse named Randy and a studly, out-of-state trucker. Cullinan's publisher, Dreamspinner Press, clearly saw the potential of the genre, but it hasn't been the only one. In 2009, Pennsylvania's Running Press unveiled a new line of m/m soft-core erotica on the basis of growing demand. Most telling, however, are the 15 m/m erotic romance titles in Harlequin's Carina Press division since June.

"Now that [Harlequin]has started a gay romance line, my prayers have been answered," says Erastes, a 47-year-old British author whose novella Muffled Drum will be published by Carina in July. Erastes - her pen name is Greek for "lover of boys" - says that six years ago there were no options for m/m authors like herself, whereas today it's challenging to meet the demand. "We are in a totally different world now: I can't keep up," she says.

"The uber-masculine stock characters portrayed in gay romances have always had great appeal with heterosexual women," Rinaldo Walcott, an associate sociology professor at the University of Toronto, notes, adding that soap operas have banked on them since their inception. "It's like a constant reliving of the Rock Hudson narrative. The unattainable is what makes these books so desirable and many straight women are now willing to investigate their own sexual curiosities."

Erastes offers a lighter take. "Well, two men in bed together are hot," she says with a chuckle. "But the main reason I write Regency-era novels which only feature men in [sexual and emotional situations]is that the Regency female character isn't as interesting to me. She has to be a blue stocking or some sort of slave abolitionist or supremely feisty. With gay historicals, I feel you have the option to break the stereotypes and have your protagonists go off on swashbuckling adventures as well as unpredictable romances."

Unlike Erastes and Cullinan, author Alex Beecroft's motivation for writing about the love that dared not speak its name has little to do with advocacy or adventure. The 45-year-old Irish mother of two, who currently lives in Cambridge, England, admits that writing queer content addresses what she calls her own "layered sexuality." "When I started, it was a revelation," she says of her first book, Captain's Surrender. "Although I have a very heterosexual life with my husband, writing m/m romance felt like I was coming out in a way: I am writing about all the fantasies I have had since I hit puberty. There is an element of women's sexuality that has not been able to express itself for such a long time. These books allow that for me and the reader."

Regardless of the genre's literary pretensions and its growing appeal with readers, m/m romantic fiction has yet to clear a big hurdle: getting onto Wal-Mart shelves. As the world's largest retailer and the place that dictates whether romance novels graduate to bestsellerdom, Wal-Mart has had a history of banning products that rock the status quo. Even so, Walcott of the University of Toronto suggests that it won't be long before you can throw titles by Beecroft, Cullinan and Erastes into your cart along with your cereal and personal hygiene products.

"I think that gay Harlequins will inevitably trump Wal-Mart's strategies," he says. "The [reader]numbers will be too staggering to ignore." 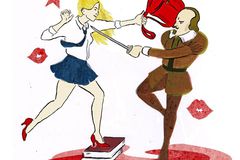 Nancy Pearl's Rule of 50 for dropping a bad book
February 4, 2011
Follow us on Twitter @globeandmail Opens in a new window
Report an error Editorial code of conduct
Due to technical reasons, we have temporarily removed commenting from our articles. We hope to have this fixed soon. Thank you for your patience. If you are looking to give feedback on our new site, please send it along to feedback@globeandmail.com. If you want to write a letter to the editor, please forward to letters@globeandmail.com.
Comments