Adria Vasil is not on a soapbox. She's seated in a chair, eating soup. Columnist on all things green and orange (if social justice has a colour) for Now magazine in Toronto, Ms. Vasil, 36, has just published her third environmental resource guide, Ecoholic Body. Sure, she wears organic clothing, natural lip gloss, a bangle made of wood-floor offcuts, and funky purple boots with recycled rubber soles, but she understands that the eco-warrior persona can be a turnoff. Which is why she is a bit of an oxymoron: a zealot who can laugh at herself.

When I met up with her at a Toronto café recently, she opened up about phthalates, half-assed veganism and whether her ecoholism affects her relationships.

Were you born green?

"I have a completely non-ecoholic background. I was raised in Quebec – in Montreal and outside Shawinigan. My dad was a franchisee of a McDonald's. My favourite thing was to go up to the counter and order as many chocolate sundaes as I could. We ate a lot of processed food back then. I was chubby."

So, what happened to turn you into an ecoholic?

"My dad was told he would die in a couple of years if he didn't change his diet. Overnight, we went from getting takeout to having steamed fish and steamed veggies. All of us kids became health nuts. My environmental awareness really hit at 13 during the Exxon Valdez oil spill [in 1989] But my Mom recently gave me stuff from my childhood and there was this drawing I did about how bad hairspray was. And I wrote about it in my journal. I was maybe 11."

Does your ecoholicism affect your relationships?

"My boyfriend is not as ecoholic as I am. We argue about thermostats. I'm lucky, though, because he is a really easygoing guy. He's extremely supportive and cares about the environment. And I try not to be naggy. I make sure my nagging is limited to things that really matter, like when he keeps his cellphone charger plugged in. But we've been together for 15 years."

Why not marry him?

"I'm not the marrying type. We have been engaged for 10 years."

But if you're engaged, why not let the other Birkenstock drop?

"I don't like the idea of marriage. For me, it seems a big way to blow a lot of money."

You could have a Big Fat Greek Wedding.

"It would have to be an organic version of My Big Fat Greek Wedding, and that's really expensive."

Aren't there some bad ecoholic habits?

"I'm the green-label police. I go label hunting, and it becomes full-time in a way. The other day, my boyfriend was packing up for work and he needed tape. So I said, 'I'll go to store to get some. I'll be back in 10 minutes." Well, I was down on my knees in Shoppers Drug Mart, taking notes on products; 90 minutes later, I'm back. You can't just take me anywhere for a few minutes. Friends don't want to go anywhere with me because it can take time. I try to go shopping alone."

Are all your clothes eco?

"Yes. But my bra is not. It's really hard to find. You can find a lot of eco underwear and eco slips and cottony things. But nothing with support."

And what about food?

"I'm a half-assed vegan. I haven't had [red]meat since I was a teenager, mostly because I couldn't digest it. Later, I saw a chicken factory video. So I don't eat any factory-raised animals.

But you eat fish?

"It's hard not to. I'm half Greek so it's tough to tell my parents not to make fish."

Do you feel toxic-free?

I have just had my urine tested for an article. In a lot of areas, my levels are lower than average. Like with phthalates – hormone disruptors found in scented products. They've been banned from baby toys but they're still allowed in baby shampoo and powder and in adult stuff, too. Denmark is banning them from all products. So if you reduce [exposure]where you can, it does make an impact.

But I was above average for lead and mercury. I eat tuna or large fish very rarely. And then, I thought, 'Shawinigan, of course, pulp and paper, mercury emissions, aluminum smelting.' It stays in your body for life. I was trying to figure out where I was going wrong. But you have to accept what you can't control. I'm not going to sit around worrying at night and thinking, 'Oh god, I'm going to die because my mercury is high.' You've got to let it go."

There's such a thing as eco-ennui. How do you deal with that?

"I try not to be preachy. I hope that I'm just giving people the details to help them make a decision. For me, I try to fit in jokes and make it conversational."

The poor economy hasn't helped. Eco-products and organic are often thought of as a luxury.

"Our grandparents were environmental before we knew what the word was. They were reusing their tin foil and saving their rubber bands and turning off lights religiously. It was about being frugal. And the whole ecoholic angle is consumer-focused. It's practical. I'm not talking theory here. I'm explaining what will save you money, what will not pollute your body. That message still resonates."

But don't you think the environmental fervour of earlier years has died down a bit?

"It ebbs and flows. That's just nature of public attention. I'm not worried because it all comes back. I'm patient and I'm supportive. When people are ready to come and go from it, I'm here offering solutions, and that's my job. I like to offer choice - this would be a greener way to do it. Ninety-five per cent of people who read my books will only use 2 per cent or 5 per cent of the content. I'm completely cool with that."

Okay, be honest. Are there extremes of ecoholism you just can't go to?

"I will always use toilet paper."

And does it ever bug you that people think, 'Oh, she's a lefty who probably wears hemp, doesn't shave her legs and reads poetry all the time.'

"I draw the line at poetry."

How green is it? How to sort out the environmental hype
April 20, 2012 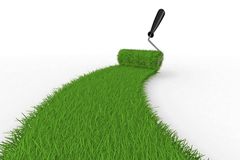