Exile, writes Eric Klinenberg in Going Solo: The Extraordinary Rise and Surprising Appeal of Living Alone, used to rank among the most severe forms of punishment, surpassed only by execution.

Increasingly, living alone is a perk of those who can afford it: "It allows us to do what we want, when we want, on our own terms," writes the author, a sociology professor at New York University who interviewed 300 singletons for the book.

"The collective project of living alone grew out of the culture of modern cities, not the monastic or transcendental traditions," writes Mr. Klinenberg, pointing to "adult playgrounds" like gyms, bars and coffee shops that let urbanites mingle, even as they enjoy their own spaces.

Today, 31 million people live alone in the United States – that's 28 per cent of all households, compared to just 9 per cent in 1950. The "remarkable social experiment" of going solo now helps define modern culture, argues the author, who spoke to The Globe and Mail from New York.

What's the difference between "singletons" as you call them, and singles?

Singles are people who are not married. In the United States, it's about 49 per cent of the population now. Singletons, as I define them, are people who live alone – 32.7 million according to the latest census estimates. They account for about 28 per cent of American households. We have to make really clear distinctions between living alone and being alone, and also between living alone and being lonely. They're very different kinds of things.

"Solitude can be experienced alone or with others": You're quoting Sasha Cagen, founder of Quirkyalones, a movement that advocates for people who enjoy being single.

That's right. Many people that we interviewed said there was nothing more lonely than living with the wrong person.

Loneliness expert John Cacioppo talks about that too, the lack of time for oneself in "harried marriages."

There's a concept that sociologists are using more these days called the "greedy marriage." Marriages can be really good for you, but the relationship plus the domestic responsibilities that often come with it can also pull you away from other things. I say this as a guy who's married with two young children. I'm not against marriage and I'm not advocating living alone. What I'm trying to do is understand this incredible social change, how it happened and what it means for us.

You argue that we use wealth to "separate from each other" in solo living arrangements, and you point to an intensifying "cult of the individual."

It used to be the case that you really had to justify to yourself and to people around you why you wanted to get divorced. Today, in many communities, if you're married and it's not going well you have to justify staying in it. People of my generation and younger grew up in the throes of the divorce revolution.

A lot of the younger people I spoke to said they didn't feel like they'd be capable, or that it would be irresponsible of them to get married before they really knew they could take care of themselves. I'm not saying people want to be alone or be isolated. They want to go out, meet new people and have sex. They just don't want to live with the wrong people.

What do you say to critics who see the trend as a threat to family values, who suggest that it makes us self-absorbed?

Who suffers more of the stigma: men or women? The spinster? The cat lady?

Yes, women get more of the stigma. A particularly difficult moment is when they reach their mid-30s to early 40s and have to make decisions about whether they'd like to have biological children. People see friends and family members who project onto them their own anxiety about their situation. It's very unusual for men to express real concern about waiting too long before getting married.

You point out that living alone is a "cyclical condition, not a permanent one."

No one's making a vow to stay single. They're moving in and out of different conditions.

Yet when Ms. Cagen announced that she was ready for a partner, some Quirkyalones accused her of abandoning the cause.

I don't think she should have to be committed to being single or living alone for the rest of her life. She's dealing with the fact that there is stigma. In a 1957 study, 80 per cent of the Americans surveyed by a University of Michigan psychologist said that adults who wanted to stay unmarried were either sick, neurotic or immoral. Obviously our attitudes have changed quite a lot since then, but there's still some stigma.

The fastest-growing demographic for solo living is 18 to 34, you write. What about these boomerang kids who can't afford to live on their own, moving back in with mom and dad?

In the last couple of years, there has been a slowing and a slight downtick, but it's surprisingly low: It went from 12 per cent of all young adults living alone to 11 per cent. In 1950, about 1 per cent of young adults had places of their own.

You write that Thoreau's mom swung by Walden Pond regularly with dinner.

Certainly different than the mythology, isn't it?

We have this immense anxiety about the fate of family members who live unaccompanied. What happens when all those singletons get old and infirm, with family far away?

We have really failed to prepare for this incredible social change and I worry about the fate of people who are not just alone but isolated. We're doing much less for them than we should be. I wish we had invested more in places that allow older people to live alone but also be connected to others. The book ends in Stockholm, which does a much better job of that.

Sixty per cent of people in Stockholm live alone. You write about one residence there called Collective House, conceived in the 1930s by planners and feminists for working women living alone, with daycare, laundry service and a restaurant in the building.

There were also pneumatic tubes inside the building that allow the kitchen to shoot individual meals up to residents. If they want to stay home, they can. The idea was that, as a society, they'd support people who want to live alone.

You also mention a newer communal residence for people over 40 whose "needs are no longer dictated by family and children." Sounds like a premature retirement home.

It's a way of preventing people from moving into these geriatric ghettos, which are really undesirable. This is a place that allows people to have individual apartments, but also there's a common kitchen and people have to volunteer to cook a few days every month. There are exercise classes, a garden, a library and movie nights.

In New York, there used to be hotels like Barbizon that were just for young women moving into the city. That has disappeared. In Amsterdam today there's one collective housing project that [New York writer]Kate Bolick talks about where women can move in, so long as they're between the ages of 35 and 65.

The idea is that people can provide each other with community, companionship and support when they need it. It won't turn into a singles' party scene or a place where people go to die.

Living alone in Canada: a snapshot

Percentages of Canadians (aged 15 and older) who lived alone.

Newfoundland and Labrador: 8 per cent

The perils and pleasures of dining alone
December 15, 2011 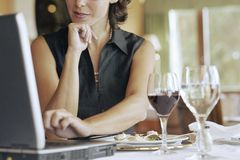