I wasn't riding a bike just to ride a bike. I was doing it to enter the Church of the Wheel, where supplicants are a happy lot, if you believe the catechists.

The happiest cities all have a high number of cyclists, John Helliwell, a renowned happiness expert and economist at University of British Columbia, explained to me.

Denmark routinely tops the list of the happiest countries in the world. In Copenhagen, one in three people cycles to work or school.

In this country, a survey of more than 6,000 people found that 66 per cent of those who walk or bike to work say they're very happy with their commute. That compares to only 25 per cent of public transit users and 32 per cent of drivers, according the Statistics Canada report.

I just wish it didn't feel so suicidal. Cyclist fatalities may be relatively low in Toronto – averaging three per year – but there are 1,200 collisions, the highest percentage by population among major Canadian cities.

"Let me know when you arrive safely," my partner said sweetly as I set off in the morning. I waved goodbye as if I were headed for an adventure to the Far North, not just to pedal 10 or so blocks to the south. I had ditched the stylish purse and heels. "Take my backpack," suggested my son, who is visiting from Europe. I put on ugly, warm gloves. I squished a woollen hat on my head. I donned the dreaded puffy coat. He was impressed.

I walked 15 minutes to the nearest Bixi kiosk, the bike-sharing enterprise in Toronto, launched last May. Bixi has 1,000 bikes at 80 stations in the downtown core. I opted for a 72-hour pass, $12 (there are four payment options), thinking I would commute back and forth to work for two days.

"It's recycling on wheels," said Dr. Helliwell. "You're doing something for ... future generations." The station is solar-powered. The Canadian company started in Montreal in 2009 and is now in Ottawa and London, England.

I felt as virtuous as a dieter who can resist chocolate cake; good and honest as Jack Layton. It would be just me, my legs and two tires among the throng, making my way.

Maybe I could be cool, too. I watched my soon-to-be biker comrades sweep into the station. They jumped off their ride effortlessly. Their bikes were like horses they hitched to a post. Off they strutted to their appointment; latter-day urban cowboys.

I joined the asymmetrical flow of traffic. Other bikers swept past me. We exchanged looks at stop signs, a silent acknowledgment of our purpose and our plight. Cars were schoolyard bullies, and we were the innocents. I remained steady, as a car drove a little too close for comfort. I steered carefully around a stopped bus, wobbling only slightly.

I was trying for a Mary Poppins effect. There is a woman I sometimes see in my neighbourhood, who rides her bike through the traffic down Yonge Street, seated upright in her saddle, wearing a dress and nice shoes, her purse in the basket on the front. Smiling and helmet-less, she is fearless and graceful as a swimmer doing a gentle, steady crawl through a choppy sea. l like what it suggests: that you're confident, oblivious to the chaos, trusting in others' goodwill and courtesy, at one with your bike. From the comfort of a car, it looks like an existential statement.

And I had an ulterior motive. Maybe I could achieve a mental void into which a column would write itself. Imogen Heap, an eccentric British singer who wears odd clothes and feathers, ribbons and butterflies in her hair, told me once in an interview that she pedals her bike to and from her recording studio in London as a creative exercise. Lyrics come to her as well as snatches of musical phrases.

Robert Penn told me the same thing. He's the author of It's All About the Bike: The Pursuit of Happiness on Two Wheels. Now 44, he gave up a law career in his 20s to ride around the world on a bike. He owns six bikes; his family of five owns one car. "What's important is the rhythm of riding a bike. That rhythm is happiness. It's meditative," he told me on the phone from Wales.

"Within 10 minutes of being on a bike, things that are immediately worrying you – that piece of work you haven't finished – have been dismissed. Ride for 45 minutes and you hardly know what you were thinking about and then something else drops in – a line from a poem or something your child said."

It was a mild winter day, almost spring-like. I liked being on the level of the street, moving in a river of humanity, contained between the buildings, all of us together but each with a destination only he or she knew. That sounds kind of Zen, no?

I was watching on an intimate level: the way one driver ignored me, the way another waved me on to go first. My bike was a perfect observational platform. I could stop when I wanted to. I could retreat to the safety of the sidewalk when the traffic was too treacherous. Maybe I shouldn't have, but I didn't care.

And into my head came an image of the time when each of my three boys first wobbled off on his two-wheeler, unassisted. My hand is gently on his back, steadying him, as I run along beside him, then I pull the hand away. "Oh, there you go! You're doing it all on your own!" I shout after him. And he disappears around the corner, on his own journey, independent. It is what life asks of all of us.

I arrived at the kiosk station nearest the office and docked my bike. I felt great. No need to go to the gym that day. That evening, I unlocked another Bixi and rode it uptown toward home. Alas, no mental void this time. I was actively telling myself why I should be enjoying the ride – the fresh air, the proximity to green spaces (Dr. Helliwell said that was a key to bike happiness), the stirring of blood after a long, sedentary day.

It was cold, and the traffic was heavy. Nevertheless, I was still feeling okay. I rewarded myself by stopping to meet my son and partner for a beer in the local pub. I was exhilarated. By riding a bike to and from the office, I felt I had reclaimed some personal time from work life. I had some control.

The next day, it all fell apart. I started off in the same way. I walked to my local Bixi and I swiped my credit card to get my unlocking code. It didn't work. I called the toll-free customer service. Wait 10 minutes, a woman explained. I did. I sent some e-mails on my BlackBerry. I tried to unlock a bike again. Still some problem. I looked at the time.

Cycling at night? Use these safety tips
September 18, 2011 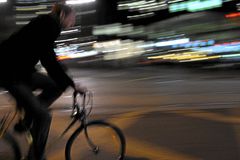 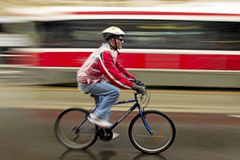