It was always a mystery to me why Rain was perennially empty. I loved that place. But then I've loved everything the Rubino brothers have touched. They did modern with zip at Zoom; they did Italian better than paesanos at Luce. At Rain, they did fusion Asian with such panache that it sizzled. And the room - tall and spare, with an indoor bamboo forest, two black walls of rain and walls of pebbles - was breathtaking

But as with any restaurant in the party district, Rain had its lifespan. It ran out of gas when the party people, who do not wear their taste buds where I wear mine, stopped coming. And one senses that the Rubino brothers, having done too many restaurants and too much TV, may have been experiencing restaurant fatigue.

Why else get into bed with Charles Khabouth, the club king? Rain reopened in early September with a new name - Ame, which is Japanese for rain - and a new design. It is now a collaboration between Khabouth and the brothers. The theory seems to be that the Rubinos know food service and Khabouth knows fun. He does so very well at The Guvernment and Kool Haus, with clubs in Niagara Falls and, in partnership with Liberty Group, at Tattoo Rock Parlour and Spice Route, home of fabulous design and egregious food.

But foodies don't always like fun. The Rubinos' partnership with the club king has the taste of a Faustian bargain. What is the price of success in the party district? At first glance, the Rubinos are doing their usual over-the-top fab food thing, this time calling it contemporary Japanese. And the drinks menu is Japanese cocktail porn: Ending a day at the office with their Hot and Sour is like waking up and finding that you've morphed into Angelina Jolie. The drink combines plum shochu with bourbon, seaweed, siracha, wasabi, sudachi and cilantro; it is then sweetened with maple syrup and topped with egg-white foam. Who cares what half of those ingredients are? The drink is hot, sour and just sweet enough to smooth edges. The other cocktails are just as entertaining. The ginseng drink is topped with an edible white chrysanthemum and vanilla ginger foam.

Other than the $14 cocktails, Ame's menu is calculated to bring in the grazing generation: Six pieces of sushi sell for $8 to $12, and most things from the hot kitchen come in at $21 or less.

The food, though, reminds me of a dinner I cooked last weekend. I grill flank steak pretty often, and it's always a hit. But instead of going with my tried and true marinade this time, I added a big whack of coriander from my garden and some sesame oil. It was a mistake: Too many flavours competed for attention, and the result was a taste-bud mishmash. Same deal with Guy Rubino's Japanese cooking, which is influenced by molecular gastronomy, French cuisine and who knows what other fancies that took flight in the chef's mind. For example: an impeccable fluke sashimi with soy pearls, white raisin ponzu, yellow beet chiffon and crisped fluke skin. We ask the waiter what exactly soy pearls are and his response is an inarticulate description of a technical process that results in (a) yet more confusion and (b) not a lotta taste.

Then there's cooked escolar from the robata grill. Traditional Japanese kitchens offer only the plainest grilled meat or fish from robata, but Ame's kitchen takes its fabulously tender escolar (a.k.a. butterfish - and for good reason) to new heights - or are they lows? The fish, for instance, sits in a bath of cold consommé with chili oil, tapioca, miso, cucumber and the occasional baby pea, topped with smoky nori and crisp tapioca chips. The result? TMI. Too much information on the tongue, leading to confusion.

Chef Rubino's food might be making some bold flavour statements but, if so, we can't find them under all the chatchkas. Tuna sashimi is pierced with baby carrots (a reference to the French habit of "barding" a roast), topped with chives and garnished with yogurt dashi, homemade miso powder, mango chili ginger mousse and bonito flakes. This may be the perfect sushi for people who fear raw fish, because you can hardly find the raw fish under all the snazzy gewgaws.

Which probably just goes to show you that Messrs. Rubino and Khabouth are way smarter than me - the party district isn't for foodies, and Ame's menu skews accurately to the party people. Boring food freaks like me who want a naked slab of raw fish are so not the Ame crowd, as befits a resto whose bar, thanks to huge timber accents, is better-looking than the dining room.

So will the party people fall in love with prawn roll, because it's fancy shmancy for 16 bucks? The smart money here is on Khabouth and the Rubinos. To me, making a roll-shaped mousse of prawn and lobster and adding red chili foam with a sous-vide cooked sliced prawn is so yesterday. As is adding orange tangerine gel dots to otherwise divine wagyu flatiron steak with oxtail and ginger-scented marrow.

More flavour punch comes from eel ramen, whose broth is deep and earthy. The eel, moreover, is like butter. And there are both oyster and king mushrooms glazed with hoi sen, matsutake mushrooms, noodles and a soy milk foam. For $10, this is a pretty exciting ramen. Pickled plum-scented rice has similar grace and no bric-a-brac. Yes, Guy Rubino can deliver a straightforward message. Somebody clear out the knickknacks. 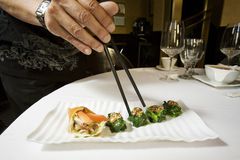 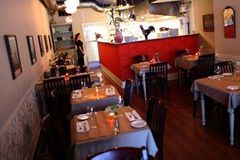