$80 for dinner for two with cider, tax and tip

When did I know that I was a francophile? Well before puberty, I started working after school in the local public library and saving the proceeds for one thing and one thing only - French onion soup and shrimps mignonette at the long-gone Mr. Tony's on Cumberland, where now stands Sassafraz. My love affair with all things French - especially food - has been undiminished ever since.

These days, I make Herculean efforts to eschew animal fat in all its delectably nefarious forms, but falling off the wagon is always fun. I have seldom met a hollandaise or demi-glace sauce that I didn't want to slurp with a spoon, and the likes of béchamel and beurre blanc are mother's milk to my palate.

Béchamel is the white sauce that transforms crepes - the cornerstone of casual French food - from pancakes into ephemera. In Paris, my favourite lunch is always a crepe on the street, where sidewalk vendors make them fresh before your eyes. My topping of choice is sucre beurre: Keep it simple and keep it butterfat. As for the béchamel, that is reserved for crepes in a sit-down situation, of which there have not been many (at least not good ones) in Toronto.

At Le Papillon on Front, for instance, I always found the crepes on the heavy side; perhaps the kitchen has lightened up in the new Eastern Avenue offshoot, Le Papillon on the Park. Their new competition is La Brehandaise Creperie on Queen Way West, where Pascal Poilbout, owner and crepier, ladles on the French culture. Others like me who think of Claude Monet's Giverny and its yellow and blue palette as heaven on Earth will be easily seduced by the creperie's colour combo of robin's egg blue and yellow. Pics of Brittany, floral curtains and an old barn door complete the French country cottage look.

Also very Gallic is how our server is borderline authoritarian when she tells me that the correct drink with the crepes is not wine but Quebec hard cider, which to me tastes like apple juice with not enough kick for grownups. And that would be forgivable if the food were. In more than 40 years of assiduous research into French onion soup, I have not met too many as milquetoast as the one at this creperie. First off, it isn't served in a crock topped with a melted-cheese-and-croute roof, but with a side of grated cheese and croutons. Ouch. Garnish aside, nothing would help this pallid flavour-free soup. As my Boba might have wondered, "Did they wave the onions over the pot?" The leek and potato soup is similarly afflicted with a pathetic absence of flavour.

Other apps are about as wimpy. I find it hard to forgive the pale, tough tomatoes in the tomato and prosciutto salad. Baby spinach salad with walnuts and blue cheese is better.

Two sorts of crepes come from the creperie kitchen: the regulation crepe made with white flour and the galette, a Breton buckwheat crepe that is slightly thicker than the flour kind but paradoxically lighter than air. Maître Poilbout's galettes are impeccable: light, fragile, tasty. But quick - somebody help him with the fillings. Galette with spinach and salmon is a horrendous combo of spinach so overcooked that it's dark and acrid with equally overcooked salmon. Better they'd used canned. Galette of ratatouille with goat cheese is far better, but nobody's going to shout its virtues from the rooftops. Crepes and galettes all come with either a bland green salad (drizzled but not tossed with vinaigrette) or even more bland potato salad.

Ink has been spilled in the blogosphere about Maître Poilbout's crème au chocolat, but either the bloggers are his cousins or they checked their taste buds when they went online: This is no crème, but instead a kissin' cousin to Jell-O Cook and Serve Chocolate Pudding.

Dessert crepes are much better. Maître Poilbout's regulation white-flour crepes are gossamer, but there is an engineering problem with a sit-down dessert crepe: Put, for example, caramelized apple with ice cream in, on and around a crepe and for the first minute or two it's all good. You have three distinct elements that are each free to shine, which they pretty much do, in this case, with one exception: the low-rent ice cream. (When I ask the server what kind of ice cream they use, she doesn't know. And after she checks in the kitchen, she comes back to tell me that it's a "no-name kind from a restaurant supplier.") But even if it were my adored Gelato Fresco, you put a hot crepe under ice cream with warm apples and the entire oeuvre shortly becomes a soggy mess.

However, only a curmudgeon like me can argue with sugar and butter on offer at less than 40 bucks per person. If Canada's four food groups were really butter, sugar, caffeine and chocolate, this creperie would be on the map and on the money. 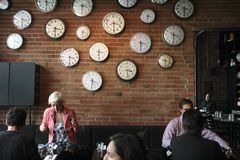 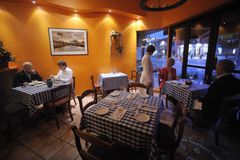