'The legacy weighs on him and, at the same time, it really helps," explains Sophie Grégoire, wife of Justin Trudeau, the eldest son of the late prime minister Pierre Trudeau, who is running as a star Liberal Party candidate in north-central Montreal in his first federal election.

Five months pregnant with her second child, the 33-year-old is a force of life, love and candour, dressed in a clingy orange top and sleek black leggings tucked into boots as she takes up a corner of a hotel restaurant in Toronto, radiant as sunshine. She holds nothing back as she discusses her husband's political ambitions and vulnerabilities, her late father-in-law's influence, relationships in the extended Trudeau family and the role she sees herself playing as wife and working mother. Three years after her marriage into a family that is often referred to as Canadian royalty, the television personality redefines the notion of what it means to be a political wife. She is all unscripted exuberance.

"I find that whatever he will do, some people will love him and some people will hate what he does," she offers about Mr. Trudeau's campaign in the Papineau riding, a former Liberal stronghold with a largely immigrant, working-class population that went to the Bloc Québécois in a closely fought race during the 2006 election. Long anticipated to follow in his famous father's footsteps, her husband has come under more scrutiny than most rookie candidates. His video address on justin.ca, in which he speaks in an arch thespian manner and alternates between French and English in the space of a sentence, has been mocked by a spoof video on the Internet.

"No, I don't like [the ridicule]" Ms. Grégoire says, wincing slightly when the subject is brought up. "But that's part of politics, unfortunately, and I have to integrate that and understand that," she says, jutting her chin out slightly. "The decision I have made is that I am not going to read everything any more. I am just not," she says, affirming her declaration with a nod of her head. " I am going to create a cocoon. …

"We live in reality," she then assures me quickly. "Criticism is part of everyday life, and you can't be loved by everyone, but I'm someone who loves people and so I have a difficult time understanding why people would hate us, especially knowing the man I am with, his integrity and his values."

Mr. Trudeau's decision to run in the Papineau riding was deliberate, she points out, not a second choice after being denied Outremont, as reported. "He thought about running in Outremont, but that's not what he wanted. He chose a riding that wasn't safe. But the media is not even giving him a chance. They just said he wanted Outremont [where the couple live]and he didn't get it, so we went to Papineau. False."

Despite her dislike of the political game, the decision to run was a mutual one. "When I met Justin, politics was not impossible, but it was not in the short-term or the mid-term plan. But an opportunity came up, and we felt that if we weren't going to embark on this adventure, a part of us would be selfish with the voice that we have and the opportunities that are given to us.

"I am there for Justin as a partner, as a lover, as a wife to help him keep perspective on all that he does," she says to explain her role in his political life. "I need to be there to remind him of our mission, of his objective as a human and political man."

Margaret Sinclair Trudeau Kemper, who moved to Montreal from Ottawa last year to be with her family, was hesitant about her eldest son's political career. "She told Justin, 'I will support you in every way but I don't encourage you to go into politics,'" Ms. Grégoire says. Being a political wife was very difficult for her mother-in-law because "she was exposed." She was battling bipolar disorder, a mental illness Ms. Trudeau Kemper now openly discusses. "We're living in a different era," Ms. Grégoire says. " I'm at a different age. I have my own career."

Justin's younger brother, Alexandre (Sacha) Trudeau, a journalist and documentary filmmaker, also lends support. "He helps because he is there emotionally," Ms. Grégoire says. "He is more of an introvert. Justin is more of an extrovert. They are very different individuals and they let each other have their own space," she comments. "[But]they have deep love for each other."

Sacha lives in their father's art deco mansion on Montreal's Pine Avenue with his wife, Zoë Bedos, and toddler son, Pierre-Emmanuel. They are expecting a second child around the same time as Ms. Grégoire.

"There's always healthy rivalry between brothers," she says, when asked if the two men are competitive. "I would lie if I said it was always, you know, 'Oh, you're the best.'"

The reason the younger Trudeau lives in their father's mansion is simple, she explains. "He was more attached to the house than Justin was." The fact that her brother-in-law was the first to have a boy, whom he named Pierre, didn't bother her husband, either. "We were actually surprised," she says of their response to the naming. "I remember Justin saying, 'That's totally Sacha.' I think it's great, but it wasn't something that we had discussed [as a possible name] And it's not because we were against it or for it. We were completely off that track." Their son, now 11 months, is named Xavier.

Both grandsons were baptized with "Michi's water," she says, referring to the water Ms. Trudeau Kemper collects every year from Kokanee Lake in British Columbia, where the youngest Trudeau brother, Michel, was killed in an avalanche in 1998.

The happiness in the extended family is "overwhelming," she says. "We cry a lot. We let it out. It's like in any family." The absence of the Trudeau patriarch is keenly mourned, she allows. "It hits us regularly, but not in a sad, sad way, more in a melancholic way. I wish that he could look into Xavier's eyes. [But]our children will not lack the material or the emotional material to get to know their grandfather."

The late prime minister's last child, 17-year-old Sarah Coyne, who was born of another mother, is not included in family celebrations, she says, but they hope a relationship will develop in the future. "I have never really asked many questions," she offers. "But I know that it was a difficult relationship between Sarah's mother [Deborah Coyne, a constitutional lawyer]and the rest of the family. The boys are very open-minded in getting to know Sarah. They are respecting her timing. They don't want to force things because they don't want to cause conflict."

Ms. Grégoire brings her own star quality to the Trudeau legacy, but she is also very aware of working in its shadow. She discusses all her work offers with her husband, including her recently appointed role as a spokeswoman for the Dove Pay Beauty Forward program. "I wouldn't associate with a brand," she says, explaining that she is "collaborating with the [Dove soap brand]mentality and a value" through its Dove Self-Esteem Fund.

"I am healed," she says of the eating disorders she suffered in her youth, which she made public several years ago. Her understanding of the pressure women are under to conform to a physical ideal propelled her to represent the Dove initiative, which encourages a broad definition of female beauty.

But it's clear she has also been freed from any existential anxiety about who she is and what she should do with her life. "Motherhood installs stillness in me. I am peaceful. What I am doing right now makes so much sense. My mission is coming alive," she says, leaning forward across the table. Her priority is her children, but she feels compelled to make a difference in other people's lives.

Margaret Trudeau reflects on her struggle with mental illness
October 12, 2010 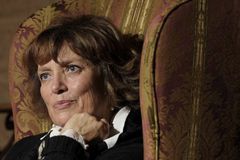