As far as castles go, Linlithgow Palace satisfies all your fantasies of what a 17th-century Scottish fortress should be. Located about halfway between Edinburgh and Glasgow, it enjoys the very au courant distinction of being the birthplace of Mary, Queen of Scots. Today, it’s a roofless maze of grand halls and winding staircases, and a backdrop for an annual summer music festival called Party at the Palace.

In 2012, it was also the setting for one of Chanel’s more dramatic Metier’s D’Art fashion shows, an annual destination extravaganza that highlights the craft of the embroiderers, jewellers and other ateliers that contribute to its collections. The story goes that Karl Lagerfeld, Chanel’s late designer, was presented with many more refined Scottish estates as the location for the show, but one mention of Linlithgow’s royal pedigree and its ruined state made it the only option for the eerie presentation. On a snowy December night, models stomped through the castle in tartans and tweeds, lit by fires blazing in the courtyard.

Scotland has a long history with Chanel, both the woman and the brand. Its roots are in Gabrielle Chanel’s relationship with Hugh Grosvenor, the 2nd Duke of Westminster in the 1920s and 30s. According to Justine Picardie’s book, Coco Chanel: The Legend and the Life, Chanel began wearing the Duke’s sporting attire while spending time with him at his Lochmore estate in the Highlands, where she fished (quite well, apparently) alongside future prime minister Winston Churchill. She started sourcing textiles from local mills for her clothing collections, claiming, at one point, that she was responsible for lightening up robust tweeds for modern tastes. The brand continues to build relationships with U.K. fashion manufacturers and brands including Barrie knitwear and Holland & Holland.

Tweed is still a house signature. For its fall 2019 show (the last worked on by Lagerfeld before his death and the appointment of longtime collaborator Virginie Viard as artistic director), Chanel’s set might have mimicked an alpine ski village but its opening looks of maxi coats and slouchy trousers favoured nubby fabrics in tone on tone plaid and houndstooth well suited to the North Sea coast. For Viard’s first solo haute couture collection in July, the tweedy twist was focused on colour with sculptural suiting rendered in bold tangerine and variegated purple.

In Scotland, the Chanel connection is highlighted in the Scottish Design Gallery at the V&A Dundee, the outpost of London’s Victoria and Albert Museum. A silk and leather evening gown in a hand-drawn lip print by contemporary Scottish designer Holly Fulton on display is from a fall 2011 collection that subverted inspiration from the Chanel/Grosvenor dalliance. It’s a good example of how this Scottish love affair goes both ways.

Photographed overlooking the rooftops of Musselburgh, Scotland, a fall look picks up the moody hues of the landscape. Fantasy tweed coat, $12,600, skirt, $3,300 at Chanel.

Fall accessories play with texture and the scale of classic wool patterns including chevrons and houndstooth. Clutch with chain, $2,450, short boots, $1,625, tweed and felt hat, $2,800, all at Chanel.

For a luxe take on British country life, fashion insiders are turning to Holland & Holland

The difference between a plus-four and a plus-eight is about four inches of leg coverage, and if you can master that trouser terminology then navigating the Holland & Holland collection will be a cinch. The company has almost 200 years’ worth of roots in Great Britain’s hunting culture – and still manufactures an extensive line of rifles sold through its boutique in London’s Mayfair and used on its shooting grounds northwest of the city. Its utilitarian-meets-luxe outerwear, knits and accessories are equally well suited to Canada’s own often-complicated, occasionally romantic relationship with the great outdoors.

“It starts with practical clothing,” says Isabella Cawdor, the former fashion editor and wife of the 7th Earl Cawdor, who was brought on as co-creative director with her friend, fashion model Stella Tennant, in 2016. “They have to perform in those wild, beautiful places.” In the Fall 2019 mix, performance translates to tweeds that have been softened for less scratch and coats that combine a weatherproof cotton shell to keep out the damp with a fur lining to ensure warmth. “What I find very satisfying about the clothes that we’re making is how easily they assimilate into my wardrobe, which is full of all kinds of designer clothes,” says Tennant. “You need those pieces that are discrete.”

The brand trades on the distinctive British meeting of country and city life, as well as a fascination with the U.K. aristocracy that endures around the world. “It’s so romantic,” says Tennant, who is the granddaughter of the late Duchess of Devonshire and lives well outside the fashion industry fray in the Scottish Borders. “We definitely feel like there’s a place for real clothes to be really lived in.”

A Holland & Holland skirt suit features a double layered hem meant to help with the wear and tear of stomping through the wilderness. Holland & Holland jacket, £950, shirt, £270, skirt, £630, shoes, £650 through hollandandholland.co.uk.

While the British countryside is often portrayed as a verdant sea of green, the fall collection also picks up the bold hues of local flowers and other natural elements. Shearling gilet, £2,250, cashmere jumper, £770, wool culottes, £590 through hollandandholland.co.uk.

There’s a long tradition of cashmere production in Hawick, Scotland. The combination of fine fibres imported from Mongolia with the soft water flowing in local rivers and decades of multigenerational knitting know-how attracted brands from around the world to make their jumpers and cardigans in this town just north of the English border. Today, the industry has shrunk like a wool turtleneck accidentally tossed into the dryer. But one 116-year-old manufacturer, Barrie Knitwear, is in the midst of a renaissance by understanding that technical and design innovation is the only way forward in fashion.

A decade ago, Barrie’s claim to fame was as the home of Chanel’s fine gauge cardigans, which the company has made since 1984. In 2012, Chanel bought the factory and incorporated it into its Métiers D’Art, the group of craft-focused studios that support the production of its collections while also developing products for other houses (both Hermès and Thom Browne continue to be Barrie clients). The project that has the 270 or so workers at its light and modern facility most excited, however, is the development of its own Barrie line.

“When Chanel bought the company, they said, ‘you should really have a brand. You should do something,’” says Clive Brown, Barrie’s sales director, who started his career in the industry at 18, washing sweaters. “It’s not just about having a brand, which is great and something everyone is really proud of, but it really pushes the factory to do new things.”

The person doing the pushing is Augustin Dol-Maillot, the brand’s artistic director, whose goal it is to prove that cashmere has applications well beyond classic twin sets. From Barrie’s design studio in Paris, he’s worked with the Scottish team to develop oversized knit denim jackets, bucket hats and pinstripe tuxedos.

The jean pieces highlight how Barrie is stretching cashmere to its limits. While the factory still houses rows of vintage, mechanical Bentley knitting machines that are used to create its B Label jersey pieces, the denim knits are created on a computerized Shima Seiki unit that looks more like a giant laser printer. It has the ability to knit unique details such as contrast stitching or frayed holes directly into the garment. The technique has amazed the machine’s Japanese manufacturer, and highlights what the Barrie team is creating by combining Scottish skill and cozy, new ideas.

A jumper incorporates a signature 3-D knit detail on its sleeve. Barrie dress, €1,690 through barrie.com.

The Globe and Mail Style Advisor travelled to Scotland as a guest of Chanel. The company did not review or approve this article prior to publication.​ 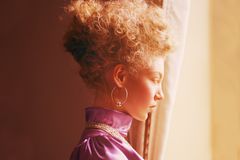 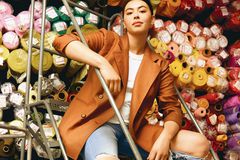