It’s hard to imagine a time before COVID-19 swept the globe, forever changing the fashion industry – and everything else – as we know it. London Fashion Week in February feels like a lifetime ago. The four days of runway shows straddled two starkly different worlds. But even before humanity had come to terms with the scale of the challenge that lay ahead, it was clear that environmental and social issues had been weighing heavily on the minds of London designers.

Two underlying perspectives materialized for the Fall 2020 season and they both still resonate eight months later: Either put your battle wardrobe on and stare the problems of this world in the face, or find comfort and distraction in nostalgia and a sense of escape.

A more aggressive stance drove Toga designer Yasuko Furuta, who sent out a battalion of looks suited to a post-apocalyptic world. Protection was on her mind via down-filled dresses, shoes and coats created to let the wearer bed down anywhere, while parachute details were added to suit jackets and shirts, hinting at a readiness to bail at a moment’s notice.

Rejina Pyo’s usually upbeat spirit was set aside for a much darker mood, as models stomped down one of London’s Underground tunnels in sharp leather looks and trousers tucked into knee-high boots. An appreciation for sustainability played into many aspects of the show, from the virtual invitation to the patchwork fur made from factory off-cuts. True to Pyo’s roots, this was a collection of pieces that could evolve with the times, the good ones and the bad.

Riccardo Tisci at Burberry was in a similarly eco-conscious frame of mind when it came to his show venue, presenting fall’s streamlined trenches and traditional tartans at a Victorian ironwork hall, in a space that’s been certified as sustainable. The setting at MM6 Maison Margiela, however, felt like a glimpse into another vision of the future, when club kids in faux-fur zebra print coats and fringed leather jackets run the show. The big news here was a pop-coloured collaboration with North Face, focused on pieces with detachable components that bring a utilitarian functionality to the forefront.

London wasn’t all doom and gloom. Richard Quinn invited his audience to his real-life dream house, unveiling a cast of characters in head-to-toe beading, florals, latex, eighties mega-puffed sleeves, and the surprising introduction of menswear. Halpern dialled up the glam with an electrifying colour palette of viper blue, magenta and emerald green, all inducing a sense of excitement as each model cruised by in one ferocious seventies look after another. For an unadulterated jolt of fashion fun, Ashish’s sixties op-art looks took the cake. The audience was grinning from ear to ear as actor Billy Porter strutted around in a floor-length pink sequin cape, his body language saying tread fiercely and don’t look back.

A number of designers did look back, through photographic and cinematic references. Emilia Wickstead’s show took inspiration from the art deco set designs of Hollywood’s Cedric Gibbons. Fabrics elegantly draped across shoulders, lace dresses paired with matching hats, and mannish tailoring offered casual elegance. The vintage silhouettes certainly brought about a sense of wonder and nostalgia, but the age-inclusive casting felt unquestionably contemporary. It was a reminder of the strides we have made in fashion since those times, and how much further we have to go.

Edeline Lee was also in a theatrical mood, paying homage to the film noir genre and the sensual power of the femme fatale. Models appeared in a series of choreographed vignettes wearing silhouettes reminiscent of the screen sirens of the 1940s and 50s. Erdem Moralioglu looked to the late portrait photographer Cecil Beaton and reimagined looks that any one of his socialite subjects would wear to be immortalized on film. Pastel cardigans were thrown over floral sheaths, which now feels like the ideal styling cue to bring a decadent dress down to earth for a life lived closer to home.

Preen by Thornton Bregazzi tiptoed a fine line between dark and dreamy, with a collection inspired by Nicholas Roeg’s 1973 psychological thriller, Don’t Look Now. Costume references such as the boxy tweed suits and pops of crimson red evoked the dramatic eeriness of the film.

In retrospect, all this might seem entirely frivolous, but there’s no denying that designers play a powerful role in signalling the issues of a changing world through what they think we should wear. To imbue a collection with meaning, they observe and reflect on the good, the bad and everything in between, and parade it down a runway for all of us to see. In more easy-going times, fashion-show audiences and luxury customers may pay less attention to those underlying messages. Now that they are in the spotlight, the question becomes, will they spark any real change?

Experiencing the energy at the London shows made one thing clear: the next generation of designers wants to project a hopeful vision towards a more inclusive and sustainable world, in fashion and beyond. 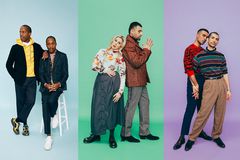 Innovators in the Canadian textile world are building a new model for clothing production
July 21, 2020 How the fashion industry is coping with challenges in the time of COVID-19
August 20, 2020 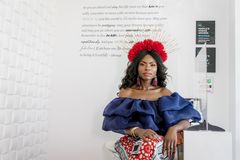