When Instagram launched in 2010, nobody but Andy Warhol could have predicted that the photo-sharing app with hipster-friendly filters would revolutionize the way we consume media. But with a reported one billion users scrolling endlessly through the platform’s user-generated photos and videos every day, it’s safe to say that the Facebook-owned app has become a primary source of information, especially when it comes to fashion and beauty trends.

“Instagram gives brands direct access to the consumer,” explains Farla Efros, president of HRC Retail Advisory. In March, Instagram introduced its shopping feature to Canadian users, where retailers can link directly to their e-commerce sites from a post, providing a seamless transition from the glossy image to the point of sale. It’s a service that’s rapidly expanding, with new features added this fall that include shopping in stories and saving items to purchase later. In October, fashion industry news website Business of Fashion published an editorial with the headline, “Instagram killed the fashion magazine. What happens now?” In it, the website reported that 72 per cent of users say they have made fashion, beauty or style-related purchases as a result of perusing the app.

Where legacy media such as magazines and television were once the primary gateway to new trends and styles in fashion and beauty, today, our eyeballs are glued to our mobiles. Even Apple chief executive Tim Cook has admitted to spending more time than he should on his phone. “Nobody’s really honestly watching any television any more,” Efros says. “Everybody streams, and if they can’t push through the commercials, they’re still not watching them or paying attention to them.” With this shift rose the influencer, an individual with a large social media following who uses their self proclaimed expertise to share trends, products and ideas while engaging directly with potential buyers.

After a few years of influencer marketing as Holy Grail, in 2018 we saw the beginnings of the influencer backlash. High-net-worth influencers such as Kim Kardashian and Chiara Ferragni cashing cheques in the six figures to promote products via their accounts has followers and brands questioning the authenticity of the platform. Still, the influencer is a long way away from disappearing. Efros posits that’s because of the intimacy inherent to their content. “They’re constantly putting up Instagram stories of what they’re doing and where they are, and they just appear to be more real.”

But beyond enabling spending, in 2018 Instagram also raised awareness. The account Diet Prada made its name by calling out big brands for knocking off lesser-known designers. Boasting a following of nearly one million, in November founders Tony Liu and Lindsey Schuyler lead the charge against a culturally insensitive ad from Dolce & Gabbana, resulting in the cancellation of its Shanghai runway show and a boycott by Chinese consumers. Beauty junkies got their own version of cutthroat content in April with the launch of Estée Laundry, an account devoted to confronting the unethical in the beauty biz. With no advertisers to answer to, these accounts are free to call attention to anyone who makes a misstep.

Social media wasn’t the only source of industry buzz this year. Here are more fashion and beauty moments that caught our attention.

A long-time Canadian fashion darling, Greta Constantine had its big American breakthrough this year. The glam designs of the Toronto-based women’s wear label, which was founded in 2006 by designers Kirk Pickersgill and Stephen Wong, were spotted on everyone from Ocean’s 8 star Mindy Kaling to social-media sensation Chrissy Teigen.

Cannabis blows up the beauty market

By adding cannabis extract to everything from mascara to shampoo, cosmetic brands brought smoke to mirrors. According to research from NPD Group, plant-based skincare experienced double-digit growth in 2018, and cannabis was without a doubt the buzziest greenery of them all, with claims ranging from invigorating your mood in the shower to softening your lashes.

Crystals, tarot cards and astrology set the tone for a year of spiritual introspection. Savannah Olsen, founder of Vancouver metaphysical shop The Good Spirit, says our fascination with the unknown goes hand in hand with the current wave of feminism. “We’ve done everything that we analytically think should work and what makes sense, but the system is still broken on a political level. People are trying to live more intuitively.”

When even the stones we rub for inspiration are imbued with a political agenda, it’s impossible for brands to stay above the fray, whether they want to or not. Nike received a mixed reaction to its charged ad featuring football player Colin Kaepernick. Meanwhile, other brands such as Dolce & Gabbana came under fire for cultural insensitivity.

Phoebe-philes around the world took to the streets to express their outrage at designer Hedi Slimane’s debut collection for the label formerly known as Céline. The new creative director smothered the once-minimalist label in his over-the-top eighties aesthetic, adding insult to injury when he removed the accent from the brand’s logo. In protest, some former devotees of the brand defaced Celine posters by drawing in the accent, and one even launched @oldceline, an Instagram account dedicated to its former leader, Phoebe Philo.

Fur flies out of many designer collections

Tom Ford, Versace, Chanel and Gucci are just some of the brands that bid adieu to fur and exotic animal skins this year, another sign that the definition of luxury is changing. Efros says it’s a decision that’s being driven by the overall lifestyle choices of the younger generation. “People really are taking a very strong point of view about not using animals for anything.”

Black-ish star Tracee Ellis Ross made advocacy the hottest red-carpet accessory this year. Working with Canadian stylist Karla Welch, Ross made a point of putting black fashion designers including Virgil Abloh, Dapper Dan and Kerby Jean-Raymond in the spotlight during her public appearances, including while hosting the American Music Awards in October.

When Michael Kors spent more than US$2-billion on Versace in September, it was a major fashion merger that had tongues wagging and eyebrows raising. With its latest purchase, Kors has effectively become a new luxury conglomerate to rival LVMH and Kering.

There’s a reason why Deciem calls itself the “abnormal” beauty company and 2018 was anything but for the Canadian brand. Throughout the year, founder Brandon Truaxe had observers glued to the brand’s Instagram account with his off kilter posts, including one in October where he announced that the company would be shutting down (it hasn’t).

A pair of royal weddings prompt a fashion face-off

Many eager royal watchers were underwhelmed by the new Duchess of Sussex’s wedding dress, and comparisons to the gown wore by Princess Eugenie at her own nuptials a few months later were inevitable. Alison McGill, editor-in-chief of Weddingbells magazine, says that the duchess’s dress failed to meet expectations of grandeur, while the princess’s ticked all the right boxes. “I truly loved what each bride did with her look, but I am a fan of structure in a wedding gown and a great bow," she says. "Eugenie had both of my favourite design details.”

Live with style. We have a weekly Style newsletter on fashion and design trends, plus shopping tips and inspiration. Sign up today. And follow us on Instagram @globestyle.

This Toronto salon prioritizes the impact of good design as much as your cut and colour
Subscriber content
December 22, 2018 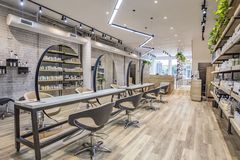 Canada’s Mejuri is shaking up the jewellery business with its approach to bauble-buying
Subscriber content
December 20, 2018 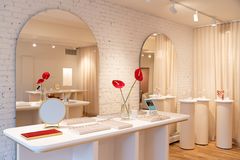 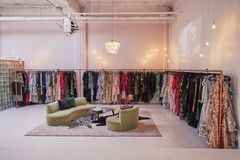