When fashion designer Gabrielle “Coco” Chanel launched her No.5 perfume in the spring of 1921, the smooth, shimmering and entirely unsentimental composition was an abstract novelty. No.5′s buzz began with a few strategic spritzes among the couturier’s socialite clients, but a century later, it’s an undisputed classic and one of the top selling fragrances in the world.

The perfume sprang from the cultural climate of 1920′s Paris and a sunny sliver of the South of France and No.5 still maintains strong ties to its origins in the valleys of Grasse. It was in this rolling landscape that Chanel met and mourned lovers, conceived of the perfume and lived off its spoils at La Pausa, an airy villa in the nearby hills of Roquebrune-Cap-Martin.

That connection to the land makes tracing the history and evolution of No.5 a refreshingly analog task. Here it is presented, appropriately, in five parts.

The picturesque town of Grasse nestles in the hills above Nice and Cannes. Today, this unassuming Provençal pocket of the French Riviera is known as the perfume capital of the world but in the Middle Ages the local specialty came from tanneries that supplied fine leather gloves to neighbouring Italy. The history of glove making and perfume became intertwined when tanners began using scented waters infused with natural floral essences to mask the hides’ unpleasant natural smell. As the story goes, scented gloves became all the rage in the French court after a pair made its way to Catherine de Medici, queen consort of France.

A new industry built around scented beauty powders, soaps and toilet waters flourished and by the turn of the 20th century, tourist posters dubbed it “the city of flowers and perfume.” The region’s savoir faire with perfumery has put it on UNESCO’s Intangible World Heritage list. The town is home to the International Museum of Perfumery, which traces this history. In nearby Mouans-Sartoux, the museum’s botanical gardens faithfully reconstruct fields of fragrant ingredients as they would typically have been planted in the 1600s.

Several historic purveyors including Galimard, Grasse’s first creator-manufacturer, operate factory museums in the area and the town is home to many fragrance laboratories and training schools. A walk through the old town’s narrow streets takes you past independent artisans who still produce scented wares from the region’s bounty, proof that the local culture of perfume is more than just nostalgia.

“I want to give women an artificial fragrance,” Coco Chanel is said to have instructed Ernest Beaux, the former perfumer to the Imperial Russian court, when she commissioned him to make her first perfume. “I say artificial because it will be fabricated. I want a fragrance that is composed.”

This quote is a favourite of Chanel’s house perfumer, Olivier Polge, because of how it connects creativity and perfumery. “At that time you had a lot of fragrances that were following the impression of one flower, or two,” he says. The Grasse native was born into fragrance and is Chanel’s fourth nose after Beaux, Henri Robert, and Olivier’s father, Jacques Polge, who presided over perfumery at Chanel from 1978 to 2013.

In an era when the artistic landscape was avant-garde and moving from the figurative to the abstract, Chanel conceived a fragrance that would similarly disconnect itself and eschew literal, easily identifiable translations of rose or lily of the valley. Beaux achieved this by combining rich flowers with a heaping overdose of aldehydes, synthetic molecules seldom previously used in perfumery, layered over a woody base.

For Polge, keeping a 100-year-old icon relevant means continuously improving the processing of flowers while vigilantly working against tiny variations within a harvest. Not unlike a winemaker, he does this through judicious blending and adjustments to maintain an even, constant olfactory quality. “We do whatever we can to have them be the truest to the creation,” he says.

Every bottle of No.5 contains the equivalent of about a thousand Grasse jasmine flowers. Known locally as jasmin de pays, they capture the area’s unique terroir like a single origin coffee bean.

Polge explains how Gabrielle, a Chanel perfume he developed in 2017, contains jasmine from Egypt that is the same species as what’s grown for No.5 in France but creates a very different olfactive impression. “The jasmine from Grasse is, I would say fresher, maybe a little bit greener, there is a slightly tea note that I recognize right away,” he says. One isn’t necessarily better than the other, but the identity of No.5 was created with the flowers growing near perfumer Ernest Beaux’s Provençal laboratory. “The only difference that you can explain is the climate, the soil and maybe the farmers who take care of the plants,” Polge says.

In Pégomas, a few kilometres south of Grasse, farmer Joseph Mul and his son-in-law Fabrice Bianchi oversee the 50 acres that grow the perfume’s five key flowers – jasmine, may rose, tuberose, iris and rose geranium – exclusively for Chanel. During the jasmine harvest from August to October, gatherers expertly pinch and pluck the flowers one by one. Jasmine petals are so delicate that their overflowing wicker baskets barely weigh anything.

The Mul family has been farming in the area since 1840 and Chanel secured their partnership in 1987 to ensure the quantity and quality of future crops. Polge thinks of the people who work the fields as an extension of the expert cutters and sewers that fill the house’s fashion workshops in Paris. Their skills, passed on from generation to generation, preserve the integrity of No.5 for the future.

Chanel’s astrological sign was Leo, the fifth sign of the zodiac. In keeping with her interest in talismans and symbols, she presented the first No.5 bottles for sale at a show of her collection on the fifth day of the fifth month of 1921. Rather than give the perfume a romantic name, she christened it with a stark numeral that resists definition.

The recent exhibition, Gabrielle Chanel: Fashion Manifesto, at the Palais Galliera in Paris underscored other ways the bottle fits into the Chanel design universe. Over decades, the label’s jersey separates and little black dresses have showcased an ethos of luxurious ease. The glass No.5 bottle is similarly utilitarian and provides no hint of what to expect from its contents. At a time when luxury perfume still tended toward the ornate curves of art nouveau, the minimalist label and austere font borrow from the stark visual grammar of Dadaism.

Although there have been subtle changes to its tasteful proportions, the No.5 bottle’s understatement is as dramatic now as when it was first unveiled. It’s an industrial design object that reflects both Coco’s philosophy as well as the artistic currents in her milieu.

Beginning with its first American advertisements in 1937, notable women have usually personified No.5 (there was one detour from this approach when actor Brad Pitt fronted a series of campaigns in 2012). The list has included Suzy Parker, Candice Bergen, Ali McGraw, Lauren Hutton and Jean Shrimpton as well as Nicole Kidman and Audrey Tautou. One ad even included the image of Marilyn Monroe posthumously. The siren once famously claimed that the only thing she wore to bed were a few drops of the scent.

The No. 5 woman is now embodied by French actor Marion Cotillard. “Chanel has always been kind of a dreamy place for me,” the Academy Award-winner says. “I like how they portray women and especially No.5 – the whole story of all the muses – and the fact that they didn’t ask those women to be someone else but to have their personality mix with the spirit of the house.”

“One of the first things we discussed was the idea of something more radical,” Cotillard says of collaborating on the tone of her own No.5 debut. A whimsical film, directed by Chernobyl’s Johan Renck, finds her singing a rendition of Lorde’s song, Team, as a daydream transports her from a snowy bridge in Paris to the surface of the moon, where she dances with a handsome stranger. “I wanted to have something that was alive and grounded and joyful.” 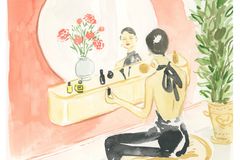 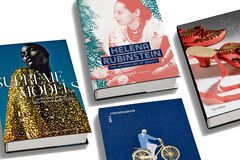