Initially launched as a men’s-wear collection by Matthew Breen and Andrea Tsao in 2017, New York-based brand Deveaux has seen increased attention since Tommy Ton, the Canadian photographer and blogger, took the helm as creative director last year. Ton, who has enjoyed a career as one of street style’s pioneers and has worked with renowned creatives such as Dries Van Noten, steered Deveaux into new territory by adding women’s wear to the mix, although you wouldn’t necessarily know it at first glance.

Instead you’ll find that Deveaux, which favours sleek, chic wardrobe staples such as slouchy suiting, jumpsuits, classic overcoats and refined knits, can largely be worn by anyone, regardless of gender; this was emphasized in the brand’s fall 2019 runway presentation, where pieces that were showcased at the men’s-wear shows a few months earlier were worn by both men and women during the event.

Ton’s design prowess doesn’t just stem from being present at fashion shows around the globe, or capturing the most beloved style stars of our generation (he’s credited with inserting quirky Vogue Japan editor Anna Dello Russo into our collective style consciousness). He also interned with iconic Canadian designer Wayne Clark at the age of 16, which helped him develop an acute attention to detail. “As a teenager you’re very optimistic about a career in fashion,” says Ton, laughing, while reminiscing about his early experience in the industry. “You don’t realize how much hard work it is, and how much money it is.” Spending time “snipping threads and applying rhinestones on evening gowns” taught Ton the importance of quality control, and it’s something Deveaux prides itself on. “Even though the product wasn’t a worldwide luxury product, it was very important that what we produced was impeccably finished,” Ton says of Clark’s lavish evening wear. Now, he’s tasked with ensuring Deveaux’s pieces uphold the same exacting standards.

This rigour aligns well with the savvy audience the brand caters to, an informed set that Ton says spans in age from 20 to 80, although he notes that baby boomers are really fashion’s most important market thanks to their income and, for some, their self-assurance. This pan-generational appeal is highlighted in Deveaux’s fashion show casting, which this season included 60-plus models like jewellery designer and tea blender JoAni Johnson and artist Hisao Hanafusa, as well as Montreal style sensation Grece Ghanem. “It wasn’t just about making a statement about age-inclusivity or diversity,” says Ton. “It’s what came naturally to us.”

The variety speaks to Ton’s ability to capture the essence of style through his off-runway photography. “I really have more of an appreciation of characters that wear the clothes, as opposed to models that wear the clothes,” he says. Ton notes that because of the Deveaux team’s insistence that “we dress whoever wants to wear the clothes,” its collections are created to focus on garments that are entirely effortless. “It doesn’t have to be a statement each season,” he says of the brand’s timeless, trend-resistant pieces. “Everything has to be ‘life-proof.’ You have to be able to throw it in your suitcase and it won’t wrinkle, or you can wear it to pick up your kids, and then to work.” 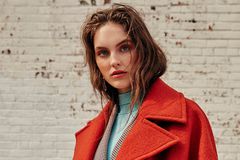