Caitlin Agnew
Special to The Globe and Mail
Published May 7, 2020 Updated May 8, 2020
For Subscribers
Comments
Text Size

For Province of Canada founders Jeremy Watt and Julie Brown, Canadian fashion has evolved well beyond the stereotype of lumberjack plaid. Focusing on elevated basics for men, women and children, their designs are inspired by their relaxed lifestyle, a feeling they’ve captured with the hashtag #CanadianHomebody. “It’s kind of how we like to live, and it finds its way into the brand,” says Brown, citing fellow Canada-founded brand Club Monaco as a source of inspiration.

The pair met in 2005 and eventually decided to turn their shared love of design into a clothing line. While doing research on what to call their company, they discovered that Province of Canada was the name given to the union of Upper and Lower Canada in the 1840s. “It spoke to Julie and I, one being from Quebec and one being from Ontario,” Watt says. Province of Canada was launched in 2014. All pieces are made in Canada and the two make a point of tapping into the strengths of the existing manufacturing industry with an expansion into housewares. “With our cushions and throws, we were able to use their machinery even though [our manufacturer] had never made something like that before,” Brown says.

Last year, the pair opened their first retail space in Toronto’s Leslieville neighbourhood. “It’s minimal, there’s a bit of a Scandinavian influence,” Brown says of their monochromatic decor, something visitors often describe as cottage chic. “We would paint our cottage all white.” Their designs are also available to order on their website.

Mulberry has relaunched its My Local series online. The lineup of musical performances and conversations has moved from locales in London, Tokyo, Seoul, Sydney and New York to live streams from the private homes of musicians, poets and artists. Performers in this year’s lineup include Joy Crookes, Alan Power and Arlo Parks. My Local is part of the U.K. fashion brand’s Take Root, Branch Out campaign, which features commissions, collaborations and activities designed to unite and lift the spirits of its customer base. For more information, visit Mulberry’s Instagram page, @mulberryengland.

Polaroid has launched an autofocus instant analog camera called Polaroid Now. This model has a newly developed autofocus lens system, longer-lasting battery, accurate flash and a more functional design easily used by photographers at any skill level. For a limited time, the Now is available in red, orange, yellow, green and blue. Black and white options will be available on an ongoing basis. This new product coincides with Polaroid’s rebranding from Polaroid Originals to Polaroid, reflecting a revival since the company paused the production of instant film in 2008. For more information and to purchase the Polaroid Now, visit polaroid.com.

A group of luxury watch companies has announced they’re leaving the Baselworld watch and jewellery trade show to launch their own. Rolex, Patek Philippe, Chanel, Chopard and Tudor have decided to create a new watch trade show with the Fondation de la Haute Horlogerie. The show will be held in early April 2021 at Geneva’s Palexpo convention centre with the goal of creating a professional platform that can meet future challenges in the watchmaking industry. Further details, including the name of the show and any additional participants, will be announced at a later date.

Canadian fashion brands continue to build community support during the pandemic. Outerwear brand Therma Kota (thermakota.com) has gone indoors with the new Kokkur apron; 15 per cent of apron sales will be donated to the Native Canadian Centre of Toronto. John Fluevog Shoes (fluevog.com) has created a limited-edition shoe inspired by B.C. Chief Provincial Health Officer Dr. Bonnie Henry. All of the pre-sale proceeds from the shoes will be donated to Food Banks B.C. And as part of its Daily Hero project, jewellery brand Biko (ilovebiko.com) has been giving frontline workers a Biko item of their choosing. Until May 15, 15 per cent of online sales will be donated to Second Harvest. 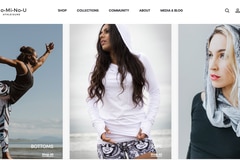 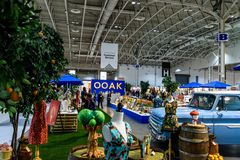 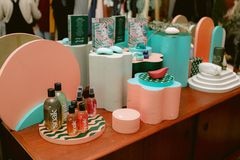