With the rise in demand for a more sustainable way to consume, people are turning to re-commerce (or resale commerce), a growing retail category that suits ethical consumers, bargain hunters and Marie Kondo disciples alike, not to mention shoppers out for distinctive looks.

“The idea of buying second-hand has evolved into being about finding rare and one-of-a-kind pieces,” says Britt Rawlinson, the owner of VSP Consignment in Toronto. “As much as I think it is about moving toward smarter, more sustainable buying habits, I also think it’s about creating looks that aren’t easily replicated.”

Unique looks seem to be something millennials and generation Z are especially after: They are more than twice as likely to shop this way compared to older consumers, according to retail analytics firm GlobalData. In fact, the secondhand apparel market, which includes resale as well as thrift and donation sales, is expected to double from US$24-billion to US$51-billion in 2023, with resale driving most of that growth.

Retailers are, of course, playing their part, and not just consignment boutiques. Canadian luxury handbag resale retailer LXRandCo, for instance, recently launched its Reluxury Restart program, which allows customers to purchase bags and resell them back up to six months later for 75 per cent in a credit or 60 per cent cash back.

Designer brands, too, are taking an active role in rewarding consumers for extending the life cycle of their garments by offering secondary resale websites. Eileen Fisher re-sells its own gently used pieces through Eileen Fisher Renew and remakes damaged pieces into wall hangings and decor items, while Patagonia has leveraged its popularity into Worn Wear, a site for scoring deals on its cult pieces, as well as a place to return old gear in exchange for a gift card.

Some designers and brands are taking a different approach by partnering with consignment stores, such as long-time eco activist Stella McCartney, who paired up with the website TheRealReal to encourage consignment of her pieces in exchange for a shopping credit to the site. Similarly, Burberry offers exclusive personal shopping experiences in their stores to customers who re-sell their products through TheRealReal.

At this point, those of us north of the border can often only buy, but not sell, on re-commerce sites. Here’s a brief guide on the various ways to get into the re-commerce game from Canada.

This Calgary-based online reseller just expanded into a 6,000-square-foot headquarters, which houses an extensive selection of designer clothing, accessories and fine jewellery as well as a showroom and a newly minted female centric co-work space. Lauryn Zhukovsky founded the site back in 2015 as Canada’s answer to international favourites such as TheRealReal and Vestiaire. Zhukovsky is bent on empowering her female clientele (launching the company was her ticket out of an abusive relationship). The Upside offers a 60-per-cent profit margin to its consigners and an authenticity guarantee on the more than 200 designer brands it carries, from Louis Vuitton to Prada.

VSP has expanded three times in its first six years on Toronto’s gentrifying Dundas West strip and stocks an impressive combination of heritage brands and trendier names such as Alyx, Lemaire and Sies Marjan. Items are typically priced at around 60 per cent of the original to start, with sales going down as low as 90 per cent off. Consigners split the profits 50/50 with VSP, which can either be used as shopping credit or returned as cash. For best results when consigning, Rawlinson suggests bringing items in as early as possible (the store begins consigning winter in July and summer as early as December). Condition is a big factor as to whether items will be accepted, as are cyclical trends. Take, for instance, the resurgence of the Dior saddle bag, which is in high demand after more than a decade lying dormant.

Depop is a peer-to-peer marketplace app for reselling designer, vintage and fast fashion clothing and accessories. The app is similar to Instagram, in that shoppers follow the closets they’re interested in buying from. Depop has made celebrities of some of its most popular users, such as Bella McFadden (@InternetGirl), a Canadian Instagram personality who went from selling her clothes on the app to pivoting to a line of jewellery designed in the vein of her 2000s-inspired, goth mallrat aesthetic. While Depop does allow Canadian sellers, most of its users are in the United States and Britain, which means that you run the risk of being weeded out by the location settings. For best results, set your location as your closest American city to make yourself visible. Depop is also a highly stylized platform, which means the better the photos, the more likely you are to sell.

Poshmark is one of the largest marketplaces in this space and it has just expanded into Canada. According to the company, one in 100 fashion items purchased in the U.S. are resold on the platform, with more than 100 million items for sale. Similar to Depop, Poshmark is a peer-to-peer model (it takes a US$2.95 commission or 20 per cent for all sales more than US$15, which is less than consigners that are responsible for inventory), but less influencer focused. Keeping an active feed of listings is central to getting eyes on your pieces and to help, the company organizes “Parties,” themed groupings of items that you can share into.

Opinion
Why flying your pop culture flag is chic
October 24, 2019 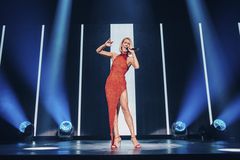 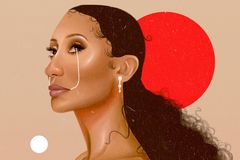