At the BAFTAs gala in February actress Rachel Weisz, 49, wafted in to the ceremony on tiered clouds of ivory Gucci chiffon like a 21st-century version of Joan Crawford’s famous dress in Letty Lynton. No longer confined to the red carpet or children’s departments, this Little Bo-Peep look can be seen at mass retailers – even J.Crew offers an everyday sparkly tulle ball skirt for adults.

Philosophically, designs such as this sit in stark contrast to Kotn, Everlane and the other pared-back, eminently practical and gender-neutral staples favoured by proponents of minimal wardrobes. But even I, who no one could ever call a coquette, have been embracing the frilly, beautiful and romantic hyperfemininity that animates this season. Because of the look’s social and political symbolic underpinnings throughout history, hyperfemininity has felt endangered as of late. Seeing it on the streets, red carpets and runways, I hadn’t realized how much I’ve been craving it.

Call it third-wave femininity. This season the girly designer dress for grownups will not be denied.

As the status of women has shifted in the years since the Disney princess tutu and tulle era that kicked off in the 1990s, I’ve felt I was expected to reject those aesthetics and the traditional, often stereotypical soft trappings of female culture as if on principle. The ubiquitous high-necked Batsheva prairie dress, last year’s style phenomenon, for example, came with a backlash against the baggage of imposed patriarchal modesty that the look implies. The rare exception has been when the deployment of ruffles challenges conventions of gendered clothing, be it in the Gender Bending Fashion exhibition at the Museum of Fine Art in Boston or if Queer Eye’s Jonathan Van Ness had worn a vintage Jessica McClintock instead of airy pleats when he toured Capitol Hill earlier this month.

Whether in spite of this or because of it, girly is now at critical mass – mass being the operative word. From H&M’s Conscious Collection to Marc Jacobs, labels are in on gossamer tiers, amped up with tufts of marabou feathers or larger-than-life rosettes. At Montreal-based Eliza Faulkner, there’s the extreme ruffle of a short sleeve, and both crop tops and scrunchies are adorned with knotted bows; sundresses tied at the shoulders drip with extravagant yards of grosgrain ribbon. “I think it’s something I’ve always sort of touched on in my work. I’ve always had a thing for whimsy and femininity and those flourishes,” the eponymous designer says. “My bedroom was Laura Ashley wallpaper with matching curtains and a duvet that my mom made in ruffles all in the same shade of pinks. It was in my psyche!”

In her earlier collections of the past decade “when normcore was at its peak,” however, Faulkner acknowledges she felt she had to use the hyperfeminine aesthetic sparingly and tone it down. She credits Alessandro Michele from Gucci for changing that by flipping the taste for girly quirk on its head. His over-the-top romantic flourishes – think guipure lace peplums, organdie dresses and supersized tulle – inspired a new wave of stealth indie designers such as Cecilie Bahnsen, Molly Goddard, and Simone Rocha to begin showcasing a few years ago to a wider mainstream audience.

Now the industry is leaning in to balloon curtain skirts, embroidered tulle T-shirts and tiered ruffles. This is not subtle fragility or a dainty Victoriana, but it’s explosive femininity. Yet there’s a different ease to it: Faulkner contends that the voluminous shapes and puff sleeves are their own form of armour. “It’s just not like McQueen where it’s tight, fitted and a corset, it’s when you just have so much fabric that it’s something about being comfortable with taking up more room,” she says of the fashion statement. “And showing off. It’s an empowerment thing in that way, to be bolder and bigger and stand out.”

“Now is such a great time for me because I can let loose,” Faulkner enthuses of the unabashedly feminine moment, and adds that customers are even asking her to revisit certain pieces from past collections. “Part of me thinks that women are finally comfortable in roles of power dressing like women, very femme, whereas before you had to wear a power suit,” she says. “Maybe that’s why they do it – they’re not afraid anymore that they have to look like the boys to sit at the table. Now you can do both, with the girliness. You even see it on the red carpet, every celebrity has a bigger bow than the last.”

That extends to cosmetics. Journalist Rachel Felder in her new book Red Lipstick points out that suffragettes wore red lipstick as part of their uniform to declare their femininity and that Alexandria Ocasio-Cortez is taking up that mantle.

Felder’s book explores the cosmetic’s unique history and role as signifier. “It has been popular with women on and off for centuries and centuries in a way that nothing else has,” she says, and considers it an “immutably linked” simultaneous declaration of strength and femininity. “The fact that you have to take an extra few minutes to put it on, that the flaws are so clear if you screw it up, the intention involved has a certain kind of confidence in itself,” she adds.

“When you put on red lipstick, as opposed to putting on a blazer and trousers in a way that perhaps doesn’t accentuate femininity, but has strength, red lipstick is equal parts I’m strong and I’m a woman.” It’s like nothing else, Felder contends, because paler shades of lipstick take the focus off the mouth and mute the effect a bit, while more extreme or edgy fashion shades offer additional layers of meaning besides the feminine. “As someone who lives in a culture that is so visual between social media and television, Felder adds, “AOC’s bold red lipstick is a perfect punctuation to underline her message. It becomes that strong, unmissable semiotic sign that she is powerful and that she is a female powerful person.”

Beware the ‘momager’: Why parents shouldn’t cash in on cuteness
Subscriber content
April 12, 2019 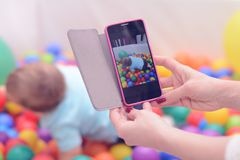 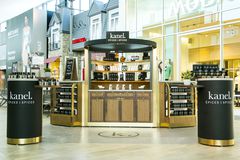 Can fashion’s watchdogs still be effective if they’re not anonymous?
Subscriber content
March 31, 2019 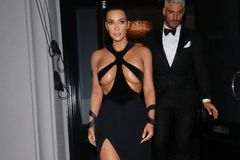