Life is about the small but important details, as any woman can attest who has ever leaned over and had her mobile phone thunk to the floor from her ill-sized pocket.

The perplexing inferiority (or persistent absence) of women’s clothing pockets is well known. But in the past several weeks on social media, celebs and civilians alike have escalated pointing out the absurd discrepancy between both the size and the very existence of pockets in women’s clothes, compared with men, from actor Anna Kendrick’s tweet on April 3 telling sweatpants without pockets to go fly a kite (not in precisely those words) to singer Greyson Chance chiming in about the pocket deficit on April 29 – “ive been buying a lot of women’s pants recently, and the pocket discrimination … ladies, this is unreal.” Every quip generates a flurry of replies and shared anecdotes.

In 2019, is it too much to ask to have well-proportioned pockets? Apparently, yes.

This modern condition is historic, and deeply entrenched. The gender politics of pockets go back to the 17th century, according to social historian Barbara Burman, who has co-authored the new book The Pocket. The author’s analysis of the discreet tie-on pockets women devised as a work-around, from around 1660, when men’s garments began to be made with sewn-in pockets, to 1900, confirms that the sexism runs deep.

“Pockets seemed an ideal candidate for a book because the more we looked into it the richer it got – it’s to do with women’s agency, their privacy, their mobility,” she explains of the freedom pockets afford, whether it be spending power (a place to store a wallet) or moving through the world unfettered by literally having one’s hands full. “It’s a very good signal about the the social differences of gender, especially when comparing them to men’s pockets,” Burman explains. “Men’s clothes have always been substantially structured, well-constructed in a very stout way so you can add pockets to britches, waistcoats, or slip integrated pockets into greatcoats.”

In the early 1800s, fashion magazines pitted the so-called Pocketists and anti-Pocketists against one another and one “anti” argument was that items in a garment pocket would spoil the line of a woman’s frock. That excuse persists with fashion that still prioritizes display over functionality.

In contrast, men’s heritage Savile Row tailors such as Anderson & Sheppard offer no fewer than a dozen pocket options inside and out, including outbreast and inbreast, hacking pockets, curved jetted, besom or patch with flaps, pen pockets, glasses pockets, hare pockets (for poachers!), ticket pockets, even gun pockets. Men have so many useful pockets at their disposal that they can afford to sacrifice one for decorative use with jaunty pocket squares. And that’s just their jackets!

Happily, by the 20th century, some women had gotten a taste of men’s tailoring and its useful pockets through custom sporting suits from a men’s tailor. They also agitated for them in garments from their dressmakers, which led to sartorial statements such as the multipocketed suffragette suits of the 1910s.

It’s not dissimilar to a recent fashion phenomenon: 2018’s ubiquitous Amazon coat from Orolay, popular in no small part because many zippered pockets make it a paragon of preparedness. It’s basically the coat version of self-reliant feminist hero Ripley’s jumpsuit from Alien.

“In the 18th century,” Burman adds, "certainly, there was a question about why a woman would even need privacy. It quickly leads to, ‘What’s she got to hide? Is she slipping out of control? Is she escaping patriarchal power, really, by having a little cubbyhole of her own?’” Costume designer Ane Crabtree capitalized on that line of thinking when creating the iconic red dresses and cloaks in The Handmaid’s Tale, constructing them deliberately without pockets.

Then last summer, The Pudding, a digital publication known for its explanatory infographics, published findings from a comparative study of men’s and women’s jeans. Their results compared 80 pairs across high street and high-end brands where, on average, women’s jean pockets are 5.6 inches or 48 per cent shorter, and 6.5 inches narrower than men’s. By that measure, The Pudding demonstrated how only about 10 per cent of women can fit a hand in their pocket, let alone anything else useful, whereas men can sink entire hands in to the wrist.

Aside from their high symbolic value, pockets are valuable real estate, and that size inequity sustains the gender gap in other unexpected ways. In Invisible Women, her recent exposé on the data bias inherent in a world designed for men, Caroline Criado-Perez points out that tech developers have designed passive tracking and data-collecting smartphone apps based on the assumption that, like men, women’s clothing has pockets substantial enough to always be wearing our phones (they aren’t, so we don’t). It’s not possible for an app to monitor healthy activity when it’s on a phone that we have to carry in our purse.

“These days are great for handbag manufacturers, because we still haven’t got the pockets we want,” Burman observes of the essential female accessory before she wistfully proposes a return to the tie-on pocket.

This reality also explains the rising popularity of a certain style of utilitarian, deep-pocketed jumpsuits from designers such as Ilana Kohn, Caron Callahan, Rachel Comey and Canada’s own Horses Atelier – not coincidentally, all women.

Similarly, every blazer by Argent, a rising “smarter work apparel” suit label, features a variety of interior pockets for pens, phones and other essential gear. “Since wearing the collection,” Argent co-founder and designer Eleanor Turner has said, “I haven’t carried a handbag.”

Are wardrobe rental services worth the cost?
May 2, 2019 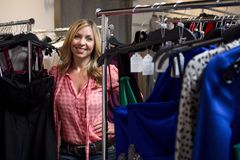 Business of Fashion’s Imran Amed on the industry’s shift in influence Subscriber content
May 7, 2019 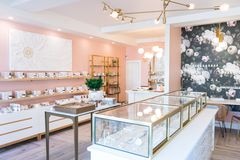