Runway presentations used to be about creating fashion “moments.” These days they seem to be about generating a coveted Twitter Moment. Perhaps it was inevitable: Fashion has joined the call-and-response world of memes.

In its recent spring haute-couture presentation, Viktor & Rolf appliquéd words onto yards (and yards and yards) of colourful tulle. The tiers of elaborate ruching and ruffles were emblazoned with wry declarations like “F* this I’m going to Paris,” “No photos please,” “I am my own muse,” and a succinct “No.” Like Melania Trump’s infamous “I really don’t care, do u?” jacket heard around the world last year, the phrases adorning the gowns read like retorts to the culture at large.

The incongruity of phrases more often found on inspirational posters and coffee mugs appearing on enormous, expensive frocks is part of the appeal of the designs. The more ridiculous, the better. Granted, the wardrobe life cycle of a jokey mug is shorter than that of a six-figure haute-couture dress.

But what the gowns lack in nuance they make up for in impact. Within an hour of the runway show, the couture clapbacks, aimed at everyone and no one in particular, had been metabolized and remixed by thousands with added commentary and achieved maximum virality (possibly even more swiftly than Celine Dion’s front-row reactions to the couture). Some Twitter users bent the message and added a layer of news topicality, others, such as retailer @perfumedrinker, simply approved, noting that “I am my own muse” was “feeling very Pisces right now.” Others appropriated the dresses to their own ends. The podcast Capsule ’98, for example, matched the slogans’ mood to different nineties teen-movie heroines with a quick Photoshop job that superimposed their faces onto the models.

The main value and purpose of the haute-couture runway has for years been as a brand-marketing strategy. Now it’s in the meme-marketing business. That this collection begs to be memed represents another stage in our accelerating cultural metabolism. This latest wave in viral fashion can be traced to Balenciaga creative director Demna Gvasalia’s ultralayered look last autumn, widely parodied in reference to the ridiculous Friends scene when Joey Tribbiani emerges dressed as Chandler, proclaiming, “Could I be wearing any more clothes?”

The Viktor & Rolf collection seems untethered from any coherent design idea – each piece is a non-sequitur, so the clothes didn’t thematically relate to the phrases beyond being a medium for the message. This is in contrast to Dior artistic director Maria Grazia Chiuri, who introduced cogently thematic slogans at her haute-couture show in the spring of 2017 (We Should All Be Feminists, also the name of writer Chimamanda Ngozi Adichie’s TED talk and essay), followed by last year’s Why Are There No Great Women Artists? for Linda Nochlin’s pioneering 1971 essay calling out art history’s institutional sexism. Subsequent runway presentations have included models with slogan tattoos.

British fashion designer Katharine Hamnett, meanwhile, has been spreading a message and raising awareness with emphatic words on clothes for 40 years. Her canvas was and remains a plain white T-shirt, exquisite in its simplicity.

In contemporary form, the initial rise of fashion as meme was concurrent with the arrival of the music video. Members of Queen wore Hamnett’s T-shirts on concert tour in the early 1980s but her block-letter slogan tees declaring CHOOSE LIFE only truly went viral when Wham! wore them in their 1984 video for Wake Me Up Before You Go-Go. Variously interpreted, the words became associated with early AIDS awareness, anti-nuclear and suicide-prevention campaigns (and were satirized in the movie Heathers). When the invasion of Iraq loomed in 2003, Hamnett’s collection blared STOP WAR, BLAIR OUT. These days her T-shirts agitate about what’s at stake for the-post Brexit British fashion industry, delivery turnarounds, import and export tariffs, with phrases such as “Second Referendum Now.”

Today, the phenomenon comes thanks to social-media platforms’ unprecedented potential for instant mass amplification of this visual language, which thrives on unlikely juxtaposition of word and image. Fashion itself is a message, it doesn’t have to spell it out. The wordless fashion meme also speaks volumes. U.S. House Speaker Nancy Pelosi in her burnt-orange Max Mara coat, for example, is so potent that If Beale Street Could Talk director Barry Jenkins put it on sweatshirts.

Political cartoonists have lampooned fashion since the birth of the mass satirical press in Marie Antoinette’s day; back then, it was on hand-tinted engraved plates and little postcards passed around (which, among other things, criticized the taxation of the poor to feed the rich. Ahem). Now it’s fashion’s turn to lampoon the world of politics and the state of the world, and by this I mean explicitly.

In the ouroboros of garments created not only with memes in mind but intended to go as viral as a BuzzFeed quiz, Viktor & Rolf is adding another layer of commentary. This time it’s on what is required to draw our attention to the runway. Staggeringly beautiful gowns in and of themselves aren’t enough. I found myself watching the runway show and hoping the words were removable appliqué panels. They have already served their purpose, after all.. And possibly the only thing worse than being yesterday’s news is being last week’s meme.

Can something be trendsetting today if it was created centuries ago? Subscriber content
February 1, 2019 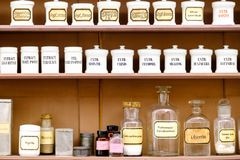 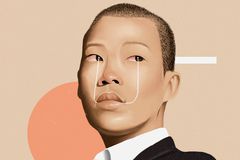 Opinion
How telling the story of her clothes tells the story of the woman Subscriber content
January 22, 2019