My lack of willpower has manifested itself in varying ways throughout my life. In university, it led to pulling near-all-nighters and skipping classes to hang out with my boyfriend. As an adult, it’s led to throbbing hangovers that make plowing through the writing I procrastinate from doing even more difficult; a few extra pounds that keep some of my favourite vintage treasures from fitting like they used to – discoveries I make in the process of rushing to get ready to go somewhere I’m late to be at; and picking up packs of exorbitantly priced cigarettes to assuage the various stress triggers that sweep through my waking hours (including always feeling like I have no money).

Tips from “time-management gurus” for ending the cycle of lackadaisical do-what-I-want-ness have never appealed to me because of their lack of incentivizing and, therefore, have never stuck. But the ache of guilt and anxiety I feel with every passed deadline, wardrobe letdown and glance at my bank balance has come to make my YOLO proclivities seem less and less like wise, healthy, adult decisions.

When I finally decided I was going to practise a modicum of self-restraint with something – anything – a few months ago, it was after hearing the story of one woman’s journey to grow out her eyebrows. Yes, something this seemingly superficial instilled within me a desire for self-possession. Her struggle to control urges to pluck, pluck, pluck was relatable but different from that of abstaining from alcohol – something that unfortunately I, too, easily associate and excuse with the life of a person in the fashion industry. The allure of a low-maintenance grooming habit that still results in looking nice also piqued my interest. And the accoutrements that come with it made the proposition even more tantalizing. (Brow serums! Shaping treatments! A nice brow brush! Did I mention I have a problem exercising willpower when it comes to spending?)

My first step was to investigate said serums. I’d heard about Province Apothecary’s offering, infused with coffee, broccoli-seed oil and lavender. The tincture had appeared in several magazines that touted its ability to promote brow growth – a miracle-type proposal in the current trend-scape, where thick caterpillars crawl across the faces of many an of-the-moment model. I spoke to a handful of people who had tried it and liked what they saw, result-wise, but they also mentioned the ritual involved – that moment once or twice a day where they massaged the sweet-smelling oil across their brows, most likely while internally repeating some growth-oriented mantra.

Could this magic elixir correct the overzealous undertaking I’d begun in high school? I was a teen in the 1990s, the peak of ultrathin brows and thinner icons. My mum would warn me that her seventies-style overplucking was her biggest regret, but I’d already committed to getting my brows to adopt the de rigueur silhouette of a narrow paisley. I can attest that my mother has had a pretty great life, so I’m now inclined to believe her when she says she shouldn’t have plucked herself into a Cher-approved frenzy. Could I justify the expense (a large bottle of the serum costs $36) of cultivating my brows by adhering to the prospect of not tweezing them during the grow-out period? With stimulating serum in one hand and tweezers not in the other, I embarked on a path of withholding.

I, too, have found much enjoyment in the regime of rubbing the serum into my brows. It feels opulent, yet necessary; not that I don’t understand the cost involved – Province Apothecary is an independent brand that uses premium natural ingredients. But it proves that this odyssey was less about the aesthetic and more about the practice: The willingness to stick to something for the sake of being respectful to the money I’d spent on the serum; the willingness to spend money – with intention – on future brow-shaping appointments; and the willingness to observe the slow, maybe never entirely complete, correction of my 20-year-old misstep.

The crawl is a constant source of not only relishing, in actual time, the satisfaction derived from something happening the way I want it to (the progress is fairly steady and there have been errant hairs requiring near-excruciating willpower not to remove on a whim). It’s also a reminder to pause, think for myself and weigh the consequences of my actions. One hair at a time.

Editor’s note: Sept. 22, 2018: The price of the serum is $36; incorrect information appeared in an earlier version of this story.

How to adopt the new colourful eyebrow trend into your beauty regimen
April 24, 2018 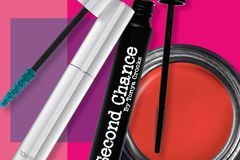