Scent has always been important to André Aciman, author of the bestselling 2007 novel Call Me By Your Name that was later made into the swoon-worthy Academy Award-winning movie. Aciman, 68, is a writer and Proust scholar, and his fiction is redolent with evocations of smells. To mark the publication of Find Me, the much-anticipated sequel that tackles what happens when main characters Elio and Oliver meet again years later, the writer collaborated with art-house perfumer Folie-à-Plusieurs on an eponymous limited-edition fragrance. It puts chemistry in the service of art with an olfactory response to moments in the novel. Ahead of his Canadian tour stop, Aciman spoke with The Globe about the power of smell, why fragrance is essential to who we are, and how scent is instant nostalgia.

In Find Me there is an evocative passage with a character who keeps sweaters sealed in a plastic bag because of the powerful emotion they contain: “It’s not death I refuse, it’s extinction.” What do you mean by that?

I did that, and I still do that. I have my parents’ clothing in a plastic bag, and you hope that the plastic [does not have] in any way its own plasticky smell. Because it’s the last thing you have of them, the scent. Sometimes when you dream of someone that you’ve lost, usually when they appear it’s their smell that conjures the memory.

Is that why smell is essential to life?

Smell, for me, immediately accesses your memory banks – unlike music, unlike painting. It goes right into your body and affects the limbic system. So, it is extremely important. It changes your mood. It does put you in a fantastic, evocative framework. You can feel that you’re being summoned somewhere actually much nicer than the little place where you are, with a nice scent. Which is why people like to have bath foams, to feel relaxed or happy, if you’ve had a tough day.

Do you think smell is the ultimate Proustian formulation?

No, but I think that … we should do justice to scent. Scent gets a lot of attention these days because people have been ignoring it for so long. We privilege other senses that we have – sight for paintings, music for ears – we still don’t have one for touching, by the way.

Why is that? When I think of the way we talk about scent it’s always spoken about in terms of something else, like music. Do we lack the right words for it?

It’s as bad as, let’s say, cooking. Food theorists borrow terms from literary jargon. Or if you look at every wine catalogue from every major cellar in North America and you read the descriptions, for some it means a lot, for others it’s gibberish. "It has the scent of apricot” or a touch of this, a bit of that. And you realize they could all be lies, it’s like reading the zodiac at the back of a magazine. Everything applies and nothing applies! So you’re sort of lost. It’s the same thing with scents. We don’t have the vocabulary for it and if we had one, it would not necessarily bring out what it is that you need to know in order to feel the scent emotion more aggressively.

How then does evocation of scent in fiction become a stealth emotional weapon?

Each one of us has our own co-efficients, as it were, into the past formed by smell. What I try to do with the prose is suggest what they’ve already seen in postcards and calendars throughout their lives. To suggest you go back to your own [memory] banks and manufacture the scenery yourself.

You wrote an essay, Lavender, in 2001 that suggests scent shapes who we are and describe it like the relationship we usually have with clothes. Is that why you keep every single empty bottle?

You have to keep the empty bottles. Those empty bottles – and don’t wash them! – keep the residue of your identity. Basically, you can open a bottle and right away you’re taken back to 1965, or 1973, or when you started dating so-and-so and she gave you a [cologne] and you wore it and you broke up but continued to wear it so it continues, in that scent, to radiate with her presence decades later.

Yet, the moment you spray cologne, it’s already in the past. Nothing can be smelled without disappearing.

It doesn’t just disappear – there’s also a little touch of, shall we say, disappointment. In other words, “I thought this was going to change me, I’m happy that I’m wearing it, but guess what, it hasn’t really changed me and right now I don’t even smell it any longer.”

Does the perfume industry in some way try to bottle that same impulse?

Yes, especially when they manufacture for you, ready-made, the sexual component of what it is that this will bring out in you – this will make you desirable, or make you think of sex right away. They have ways of suggesting that, usually by showing you a picture of a half-dressed or about-to-be-undressed human being and therefore immediately they manufacture for you the image or the sensuality behind the perfume. Which may not be there at all!

André Aciman will be in conversation in Toronto on Dec. 11 at 7 p.m., at TIFF Bell Lightbox. For more information, visit tiff.net 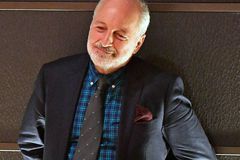