I stood at the top of an ancient tower, watching a sailboat glide across the aquamarine water of the Bay of Naples.

Below me lay the cascading remains of fortified walls, built centuries ago to guard against enemy sailors and pirates. (That day, the biggest threat to tranquillity seemed to be the seagulls squawking ominously from the ruins.)

I was in Ischia's Castello Aragonese, a fortress that, at one point, would have been the bustling refuge of 5,000 people. But on a lovely Sunday in spring, I was completely alone.

Except for the birds, that is. And the ghosts.

Located just a 30-minute ferry ride from Naples, Ischia is the largest island in the southern Italian region of Campania, yet it remains one of the area's lesser-known destinations. When I told friends in the United States that I was headed to an Italian island for the weekend, they jumped to the obvious conclusion. "Capri?" they asked.

No, not Capri. And not the Amalfi coast, either, which, in my four years living in Italy, I'd visited many times.

Both destinations, of course, have plenty to recommend them; there's a reason so many travellers have sought them out over the years. These days, though, the locations can feel too famous for their own good. English rings in the streets of Sorrento and Amalfi Town, while the local fishing industry has given way to one seemingly based on imported coral jewellery and limoncello in boot-shaped flasks.

Don't get me wrong: Tourism is a major industry in Ischia, too. For every American friend who'd never heard of it, there was an Italian whose eyes widened, saying, "Oh, e' bellissima! It's so beautiful there!" A starring role in the 1999 film The Talented Mr. Ripley – playing the fictional Mongibello – helped further raise the island's profile.

But ever since Emperor Augustus gave Ischia to Naples in the 1st century B.C. in exchange for Capri, the island's been seen as a less swanky, less popular alternative. For those wanting to get away from the crowds – or who don't have the deep pockets (not to mention motivation) to keep up with Capri or Positano's VIP scenes – that's excellent news.

Like its glitzier neighbours, Ischia boasts spectacular views and glimmering water. As a volcanic island (the last eruption, in 1301, destroyed a city), its fertile soil gives birth to a dizzying abundance of flora and fauna: It's estimated that half of all flower species indigenous to Europe can be found here. It's 47 square kilometers of lush greenery and peaceful seaside towns.

While you could spend a weekend simply gawking at the views (one of the best spots is Sant'Angelo, a secluded harbour with postcard-worthy panoramas of the sea), Ischia's more active pursuits are just as tempting. Breathe in the scent of geranium and walk among ponds filled with lotus flowers and lillies at Villa La Mortella, where Susana Gil, wife of British composer William Walton, cultivated two hectares of exotic gardens. Soak up the sun at Citara, where the kilometre of white sand makes it the best beach on the island (good luck, by the way, finding a comparable spot on the rocky Amalfi coast). Taste local wines – and Ischia's culinary specialty, cooked coniglio (rabbit) – at the vineyard of Pietratorcia. Relax in the thermal springs, where water bubbles up at 90 degrees, at spots such as Sorgeto or the Terme de Cavascura spa.

Or do as the locals do: Enjoy a passeggiata, an evening stroll. As the sun dips below the Mediterranean, the streets and squares of the town of Ischia Porto fill up with tots teetering on tricycles and parents pushing strollers. If you need a boost, dive into a decadent baba al rhum, or take the edge off with a café corretto, coffee "corrected" with grappa or sambuca, at the bustling Gran Caffè Vittoria.

As you sit and sip, consider that this seemingly simple island has a history far richer – and more brutal – than it lets on.

First settled in the Bronze Age, Ischia was mentioned in both The Iliad and The Odyssey , conquered by the Greeks and the Romans, raided by barbarians and Saracens and, in the 14th to 16th centuries, repeatedly sacked, first by fleets under the competing Italian dynasties, then by Barbary privateers and pirates. Violence continued into the 19th century: The English shelled the island, then ruled by the French, in 1809.

To get the best sense of Ischia and its past, climb or take the elevator up to the Castello Aragonese. The island's main – and most stunning – attraction, the castle is connected to the town of Ischia Ponte by bridge and clings to the top of a volcanic rock. Dating back to 474 B.C., the fortress was rebuilt by Alphonso of Aragon in 1441; it eventually housed 13 different churches, along with residences, shops and gardens. Vittoria Colonna, an Italian noble who was a close friend to Michelangelo, lived in the castle for almost three decades.

Vittoria also married here, in the castle's Cathedral of the Assumption. Today, she'd likely be shocked to see the site of her opulent Renaissance wedding: Bombed by the English in 1809, the cathedral is a shell of its former self. Once-grand colonnades soar into open air; baroque stucco flakes in the sunlight.

The ruins are unsettling, but nothing compared with the castle's Convent of the Poor Clares. The nuns came from noble families (often not by their own choice), and they remained for not only life, but death. You can visit the rooms where deceased nuns were kept, propped upright on commode-like, stone seats. As the bodies decomposed, the fluids collected in a vessel placed underneath.

As haunting as Castello Aragonese is – and as much as it's a disquieting reminder of the passage of time – it is also filled with a sense of peace. Standing in the grounds, surrounded by olive and fig trees, storied history and spectacular views, I knew: In swapping Ischia for Capri, Emperor Augustus made a huge mistake. Ischia isn't a place you gave up. Even in favour of a glitzier scene.

Of course, I couldn't help but be thankful to him, too. After all, he's tricked generations of travellers into thinking that Ischia isn't worth visiting … and that, undoubtedly, is part of its charm.

Where to eat: Locals and tourists alike rave about the wine, and the lunch, at Forio's Cantine di Pietratorcia just outside of the town of Forio. (Don't miss the rabbit, a local specialty). pietratorcia.it

In Sant'Angelo, find the stand selling fresh-squeezed juice, called spremuta, right at the bus stop. The vendor takes his craft very seriously, and it's likely to be the best juice you'll have in all Italy.

In the town of Ischia, Gran Caffè Vittoria is an elegant favourite for gelato, pastries, and, of course, coffee. Corso Vittoria Colonna 110

Where to stay: For something different, stay at 16th-century convent-turned-resort Albergo il Monastero. Located within the walls of the Castello Aragonese, it has a panoramic terrace, spa and a restaurant serving up food fresh from the fruit and vegetable gardens. Rooms from $176 (€130). albergoilmonastero.it

Tripping in Italy: A midnight encounter leads to a photographer's dilemma
November 19, 2012 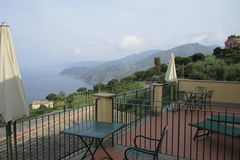 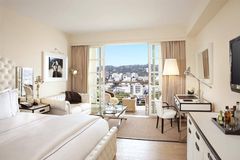 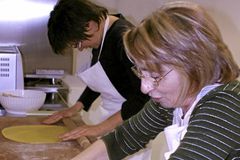