How did my wife and I end up sharing stiff drinks in a hot tub with a bunch of nearly naked Italians?

It happened on the Italian Riviera, not long after booking into Punta Est, an elegant boutique hotel overlooking Finale Ligure.

The place was buzzing with people, all dressed to the nines, milling around with glasses of wine and nibbling on hors d'oeuvre. A wedding reception was just beginning.

After settling into our room, we mixed and mingled and got the lowdown: The petite, dark-haired bride was from a prominent family that lived nearby. The groom was a tall young German who was studying at Oxford.

Exploring the hotel grounds, we discovered a large natural limestone cave with stalactites and flowing water. It had been turned into a spa of sorts called the Grotto, with lounges, subdued lighting and a huge wooden hot tub.

Later that day we put on bathing suits and headed for a soak. But the tub was occupied. Already well into their ablutions were five young Italians in their late teens or early 20s. Two were sisters of the bride, and one perhaps a brother. Two others were boyfriends of the sisters.

Fortunately, they welcomed us to join them. They had brought a large bottle of homemade grappa, a powerful drink distilled from local wine, and offered us big juice glasses of the stuff. We accepted and were quickly halfway plastered ourselves. What was not to like?

Then an uncle of the bride arrived to see what the young folks were up to.

They raised their glasses, began calling his name and dared him to come in. He hesitated, but eventually undid his bow tie and stripped down. Folding his dress clothes over a chair, in he climbed wearing just his underpants. We realized then that the others, too, were only in underwear.

Then came the mother of the bride. "Ma-ma, ma-ma," the sisters chanted and began clapping their hands. "Oh, no, I couldn't," she objected in Italian, but her daughters kept calling, "Ma-ma, ma-ma." She, too, quickly undressed and stepped in, clad only in bra and panties, and accepted a glass of the grappa.

Finally, the father of the bride showed up in his tuxedo. "Pa-pa, pa-pa," the chanting and clapping began. Well, with his wife and brother already committed, how could he resist? He did not.

Adding all these extra bodies, the water level rose. And with the drinking, so did the revelry.

But all good things must end. And the Italians had brought no change of underwear. They patted themselves dry with towels as best they could, got back into their finery and went up to dine.

We sank back into the water, chuckling. What would the German in-laws think when they noticed the soggy clothes? Would they have second thoughts about the family and country they were linking themselves to so closely?

An idyllic Mediterranean island (without the tourist hordes)
June 15, 2013 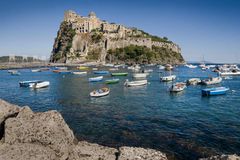 Facts & Arguments
As a 14-year-old girl visiting Rome, I quickly came to think I was pretty hot stuff
June 17, 2013 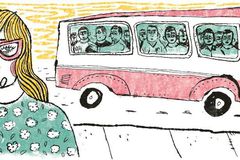