I realized something the other day. Nothing odd or world-shattering. I realized, as I rode my bicycle along a side road in east Toronto, that I feel about 12 years old when I am on my bike.

The thought crossed my mind as I stood on my pedals and flicked my handlebars just a touch to steer around a sewer grating and a bedraggled winter hat clinging to existence on the side of the road.

Yep, 12 is about right. I don't feel 4, the age I was the summer my training wheels came off and my grandfather ran alongside. I don't feel 8, like when I would ride down the hill and around the corner to school. And my 11-year-old self, riding to softball games and practices, is still a little too young.

No. I feel 12. I am master – I guess I should say mistress – of all I survey as I ride around. It was the time I was suddenly old enough to go off on my own adventures, feeling the confidence of my own abilities. I was savvy enough to know all the shortcuts around my neighbourhood, where the drinking fountains were, where to find the best trees for lolling under on a summer day. It was a time before high school and boys, before work or responsibilities.

Now I'm middle-aged, edging closer to retirement. But just like back then, when I'm on my bike, life just can't get any better.

Which is why it is so surprising to me when some people, usually women a few years older than me, say something like, "That's good exercise." Or the one I just don't understand, "Good for you!"

If they only knew how much fun I am having, how young and free I feel, how vital, they would get on their bikes too. I mean, I tell them. I do.

Sometimes they nod, but often they sort of tip their heads to the side and smile hesitantly at me as if they don't understand. Fun, it seems, just doesn't compute.

And then I remember: Just a few years ago, I was like that too. I had stopped working at a job that was killing me in an industry that just doesn't care about anyone, and I was isolated and burned out.

I drove everywhere – to the library, to the store. I would have driven to the laundry room, but it was right next door to my apartment. Then my car died.

I tried to buy a car, but nothing worked out. So I started walking. It was pathetic. I felt pathetic. I had very little stamina, and I had to stop every few yards to rest – on a bench, on a stone fence, or in a transit shelter.

After a few months and a lot of perseverance, I could walk longer distances without stopping, and as the summer wore on, I finally walked more than a mile without a rest. I was happy at my progress, but I was missing something.

I was missing the feeling of the wind in my hair on a summer's day as I drove down the street, the sound of the radio playing a cheerful tune. I was missing the split-second decisions you make when driving that don't happen when you are hoofing it. But I didn't have a car any more, and couldn't afford one after swapping my high-stress career for one that was more autonomous and creative but less well-paid.

I began riding my bike again. Not for exercise – I was already getting plenty from walking everywhere – but for fun. With a long-time friend who had also downshifted from the corporate world, I rode along the bike paths of North York and Scarborough. We took the side streets and, I confess, stuck to the sidewalks on busy streets we were too scared to ride on.

I found that I was enjoying it more and more, that I could ride farther and farther, and that I was meeting more and more people. I found, too, that somehow making friends was as effortless now as it had been when I was 12.

I was meeting people from my neighbourhood, sure, but also people from miles away – people who had seen us riding and who called out with a grin, "Hey, bike ladies!" or laughingly, "I saw you down at Eglinton and Pharmacy last week – in the rain!" I'd wave and smile and make a new friend.

It isn't just those in cars or walking who notice us. There are a host of other "bikers" in my neighbourhood. There's the anonymous woman riding her bike along the road who always waves as she rides by; there's the guy pulling the cart behind him as he rides down to the recycling station (we started talking to him, and now whenever we see him, we stop and catch up).

There are men, older and younger, who chat with us when they pass by. There are serious cyclists, male and female, wearing spandex as they speed by on their racing cycles. They have seen us riding so many different places in our extended neighbourhood that they wave and smile as they ride by.

But the nicest thing of all was when an elderly lady said to my friend and me: "You make me happy. You always smile and wave at me. Not everyone does that, you know."

Facts & Arguments
What I learned from a bunch of teenage African bicyclists
February 6, 2013 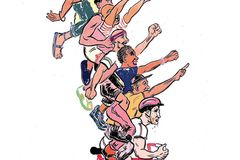 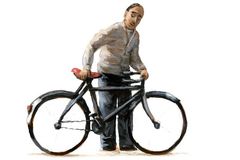 Facts & Arguments
I gave up law school to cycle to Mexico
November 16, 2011 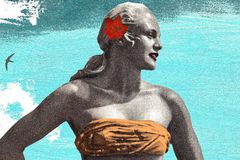